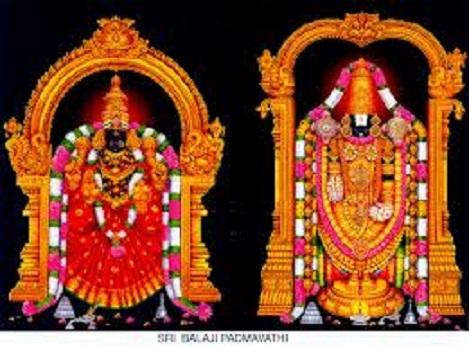 In the previous padhigam she had enquired SrI pAnchajanyam about the nature of nectar of emperumAn’s mouth. After this, her experience in her mind reached up to emperumAn. At that time, the monsoon clouds came there uproariously. Due to the similarity of their colour and their quality of magnanimity, the clouds appeared like emperumAn to her. She thought that emperumAn himself has come to her. After getting some clarity, she realised that emperumAn has not reached there. Since the clouds which came there had the intelligence to move around, she decided to send them as messengers to emperumAn. Instead of sending them as messengers to vibhavAvathAram (emperumAn incarnating as rAma, krishNa et al), she sends them as messenger to archchai (emperumAn in idol form), at thiruvEngadam. In ramAvathAram, sIthAp pirAtti had a distinguished, wise person such as hanumAn to inform of her status to SrI rAma. Here ANdAL is so confounded by her love for emperumAn that she is sending an achEthana entity (one which does not have thinking power) as a messenger to convey her love. Due to the lust that she has towards emperumAn, it does not strike her that emperumAn in archchai form will only give dharSan (revealing his divine form) and will not talk or move with a person. Love or lust is also a form of devotion. In other words, they (the male and female) will sustain themselves if they are together, else they cannot sustain themselves. These qualities will be present in pirAttimArs (feminine people) as their nature. This is the reason that AzhwArs assumed the pathos of a female consort of emperumAn. However, in the case of ANdAl, since she is the reincarnation of bhUmippirAtti (bhUdhEvi), these are present as part of her nature.

First pAsuram. She tells the clouds to ask thiruvEngadamudaiyAn whether destroying her feminity will bring him any fame.

Oh clouds who appear to be like a canopy for the blue coloured sky! Has my swAmy (lord) thirumAl who dwells permanently in the hill of thiruvEngadam, where clear streams flow, come along with you? I feel sorrowful such that droplets of my tears fall on the edge of my bosom. Does this bring him any fame?

Second pAsuram. She asks the clouds whether emerpumAn has sent some words of comfort to her who is troubled by wind.

Oh monsoon clouds who rain distinguished pearls and gold! Is there any message from emperumAn who is splendrous with bluish complexion and who dwells permanently in thiruvEngadam? I am troubled by the flame of lust which has entered me and seized me, due to which in the middle of night, I have become the target of gentle breeze, which makes me sorrowful.

Third pAsuram. She asks the clouds whether she can sustain herself by reciting the divine names of emperumAn.

Oh merciful clouds! The radiance and complexion of my form, my bangles, heart and sleep have left me due to my sorrowful state, making me very weak. Alas! Could I recite the divine, auspicious qualities of my emperumAn gOvindhan who resides permanently in thiruvEngadam which has cool streams, and sustain myself?

Fourth pAsuram. She prays to the clouds to inform her desire to emperumAn in the presence of pirAtti (SrI mahAlakshmi) who will play the recommendatory role.

Oh clouds which have lightning streaking across in the form! I have a desire that emperumAn, who resides permanently at thiruvEngadam, should embrace my youthful bosoms desirously on his beautiful, divine chest. Tell this to emperumAn who has the divine chest in which pirAtti has mercifully taken residence.

Fifth pAsuram. She prays to the clouds to reveal her status to emperumAn who removes the enemies of his followers.

Oh clouds which rise with a flourish, swallowing the sky and pour rain from the sky in huge gatherings such that flowers in thiruvEngadamalai, which are full of honey, get scattered! emperumAn tore apart the body of demon hiraNya kashyapu with his sharp nails which had flesh with them. If that emperumAn would return the bangles which he had taken from me, please him of my status.

Sixth pAsuram. She prays to the clouds to tell her state to nArAyaNan who had snatched away her benefits.

Oh cool clouds which have risen up after drinking cool water! Oh clouds which rise up the hill after spreading well in thiruvEngadam which is the permanent residence of emperumAn who obtained the worlds as alms from mahAbali! nArAyaNa has taken away my benefits [feminine qualities] such that I became just like the wood apple fruit which has been sucked of its juice by mosquito. Tell that emperumAn about my sorrowful disease.

Seventh pAsuram. She prays to the clouds to tell emperumAn that she cannot sustain herself unless she embraces him.

emperumAn churned the ocean which has fame and lot of conches. Oh cool clouds which roam around thiruvEngadamalai where that emperumAn resides permanently! My submission to the divine reddish feet of that emperumAn who has reddish eyes is this: if that emperumAn come here and unites with me one day such that the paste of vermillion on my bosoms gets removed, my life will sustain. Go and tell him this.

Eighth pAsuram. She prays to the cloud to tell him that keeping quiet like this [on his part] is wrong.

Oh dark clouds which are present in thiruvEAngadamalai during the monsoon time! emperumAn mercifully entered the warfront during the time of war and emerged victorious. I recite the divine names of that emperumAn and fall down like the beautiful leaves of the maddar plant during rainy season. In the long years which would come, will he not mercifully say a word, on any day?

Ninth pAsuram. She prays to the clouds to tell him that if he continues to torture her any further, his reputation will suffer.

Oh dear clouds which are like exulting elephants, rising uproariously, having thiruvEngadamalai as your residence and prospering! What is the word of the emperumAn who is reclining on AdhiSEshan! If he continues to ignore me like this, will not the people of this world say “Even though that emperumAn has always remained as a protector, he killed a girl without thinking that it will cause deficiency to his basic nature”?

Tenth pAsuram. She completes the decad saying that those who enjoy this decad, meditating on it in their minds, will become servitors of that emperumAn and prosper.

ANdAL, the daughter of periyAzhwAr, enjoyed the emperumAn who has beautiful divine forehead and beautiful divine face, without any deficiency. These ten pAsurams mercifully were composed by ANdAL, using clouds as messenger, desiring the emperumAn who has AdhiSEshan as his mattress. Those who keep these thamizh pAsurams in their hearts and are capable of reciting them will become his servitors, carrying out kainkaryam everyday.