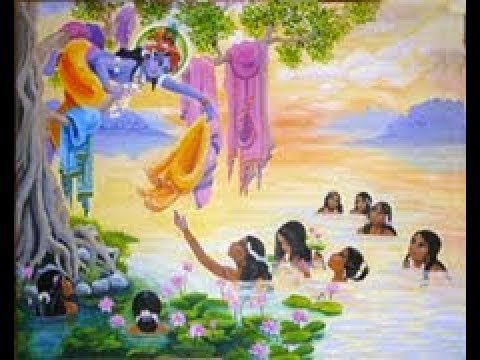 In the previous decad, ANdAL and other herdgirls were together [in a happy frame of mind]. Looking at this, the parents of the girls thought “If we allow them to continue like this, they will go overboard in their happiness due to their union and may even die”. Hence they separated the girls from kaNNan and locked them up in cellars. In this state, both kaNNan and the girls started languishing separately [unable to see each other]. Looking at this, the parents and relatives thought “If we continue to separate them, they will die. If we allow the girls to be with kaNNan, that too will become disastrous. Hence we will allow them to engage in the ritual called as pani nIrAttam (taking bath in the river very early in the morning) so that they will get good husbands. During that time we will allow them to be with kaNNan for a short time and will not bother about that”. They told the girls to have bath in the river before dawn. Since kaNNan was keeping a constant watch on them, he came to know of this, and followed them to the river early in the morning. However cautious the girls were, kaNNan followed them to the same river where they had gone for their bath. Being herdgirls, ther disrobed at the bank of the river and entered the river for their bath. kaNNan who came there, took away all the robes and climbed on to a kurundham tree nearby. Once the girls came out of the river after their bath, finding that their robes were not available where they had left them, became perplexed and thought “Did the sky take them away? Did the directions take them away? Did the river take them away or did kaNNan take them away?” They then saw kaNNan atop the kurundham tree and guessed what had happened. They decided that just as he had followed them and stolen the robes from them without their knowledge, they too should get them back from him somehow or the other. They requested him in various ways and in the end, told him of their troubles. He then returned their robes and was with them happily.

First pAsuram. Stating the troubles that they are suffering from, the girls worship with folded hands and seek the robes.

Oh one who is lying on the mattress of thiruvandhAzhwAn (AdhiSEshan)! In order to bathe by immersing well in the river, we came here before the rooster called [before dawn]. Now, the opulent sun has also risen. We are suffering a great deal here. Hereafter, we will not come to this river. Friends and I are worshipping you with folded hands. Please give us our robes, mercifully.

Second pAsuram. kaNNan thought that they are asking for robes instead of being united with him. Hence, he took a few robes which were still lying on the river bank and climbed on to the tree. Seeing that, the girls are sorrowfully asking him to give them back their robes.

Whatever happened here! Alas! Through which way did you come to the river? Oh the great person who has donned a thuLasi garland on the crown with honey dripping! Oh one who has amazing activities! Oh one who is sweet like nectar to us! Since we are not fortunate, we cannot agree to be with you. Oh one who has wondrous activities! Don’t be hasty. Oh one who jumped on to [the poisonous] snake kAliyan and danced! You should mercifully give us the robes which you have kept on the kurundham tree.

Third pAsuram. Believing  him when he said that he will return the robes to them, a few girls came out of the river. When he started speaking dear words to them, they said that they will leave the place if he gave them back their robes.

Oh one who destroyed lankA with the bow! Alas! What sort of sport is this! If our mothers come to know of what happened here, they will not let us into the house. You are not even thinking that it is improper on our part to be like this without our robes. You have climbed on to the kurundham tree which has blossomed flowers. We will give you whatever you desire. We will walk to our houses in such a way that no one sees us. Mercifully give us our silken robes.

Fouth pAsuram. As they were talking like this, he indulged in some activities which made them fearful. Seeing that, they tell him their sorrows and pray for his mercy.

Oh one who destroyed lankA! Many people are having their bath in this lake. Look in all the directions around the banks of this place and see the tears rolling down our faces, even as we try to control them. Oh one who has no sympathy! We have realised that you are the leader of monkeys which climb trees. Mercifully give the robes which are on top of the kurundham trees.

Fifth pAsuram. Since ANdAL was born in the clan of mumukshus (clan of AzhwArs, who desired to be liberated), she knows the divine mind of emperumAn. When gajEndhrAzhwAn (elephant troubled by crocodile) called, he came immediately without looking at his greatness. Keeping this in mind, she says that they are suffering more than the trouble which gajEndhrAzhwAn suffered and hence he should give their robes.

Oh emperumAn who has a dark divine form! Carp fish and scabbard fish are biting our legs, together. If our brothers come to know that you are troubling us like this, they will come running with their spears to drive you away; will that not end in another type of game? Instead of dressing up with beautiful short dresses and sitting on the kurundham tree, you should mercifully give us our robes.

Sixth pAsuram. Here, they mention about how they are troubled by the lotus stalks and pray to him.

The stalks of the lotus plants in the pond, which is expansive and has lotus flowers, are biting our legs. We are suffering as if we had been stung by poisonous scorpions. Oh our leader who is capable of throwing up pots and dancing! You should stop the mischief that you are doing and mercifully give us our silken robes.

Seventh pAsuram. They tell him not to trouble girls like them and do unjustful acts.

Oh one who is thinking of protecting everyone even during the time of deluge, when none is present! We are suffering, standing in water. You are doing unjustful acts. Our houses and the village are far from here, even if we want to escape from you. Alas! Even if you trouble us like this, we are very affectionate towards you. If our mothers see us together with you, they will not allow us [to come here again]. Mercifully give us our silken robes. Do not sit on top of the kurundha tree which has well blossomed flowers.

Eighth pAsuram. Relatives in whose presence you will feel ashamed have come here. Do not carry out mischiefs in their presence and feel ashamed.

Oh one who is lying with eyes, which are like very pure flowers to sleep, after carrying out mischievous acts in earlier times (during daytime)! Among those present here are not only the daughters of your aunts, but there are other relatives too such as your aunts and their mothers. These mischievous acts of yours are not appropriate. We have spoken these words truthfully. Oh one who is like a tender sprout for the clan of herdsmen! You should mercifully give us our robes.

During the time when kamsan [kaNNan’s maternal uncle] wanted to kill you, you escaped in a night of utter darkness and came here to give sorrow to the youthful girls who are standing in this lake. yaSOdhAp pirAtti will not scold you to make you fearful. She allows you to the extent that you carry out mischiefs. Oh the shameless one who drank the milk and life of pUthanA [demon]! Give us our robes.

Tenth pAsuram. ANdAL completes the decad by stating the benefit for those who learn this decad.

kaNNapirAn (SrI krishNa) who is our lord and who has a dark complexion, indulged in divinely playful acts  with us, the cowherd girls. ANdAL (I) , the daughter of periyAzhwAr, who is the leader of those who live in SrIvillipuththUr which is surrounded by beautiful golden mansions, mercifully composed those acts  as pAsurams with sweet music. Those who are capable of learning these ten pAsurams will go through the archirAdhi mArgam (the path of brightness), reach SrIvaikuNtam  and live with great experience together with SrIman nArAyaNan who lives permanently there.