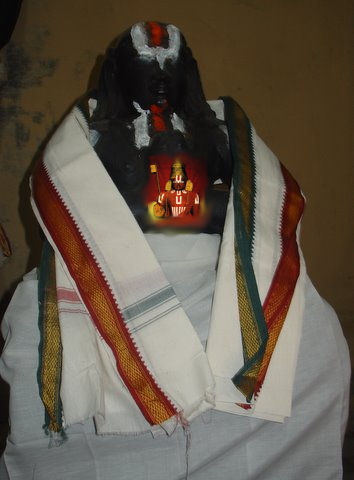 I kept the gold-like, desirable, divine feet of amudhanAr, who was born in mUngil kudi, on my head as a decorative ornament, such that all the pApas (sins) which I had accumulated from time immemorial would disappear. After doing this, yama (the lord of righteousness) and his followers will not be related to me in any way.

emperumAnAr is one who bestows the power to become victorious over samsAram on those who surrender to him, after they realise that all the silly pleasures which come from worldly matters are lowly. Oh heart! Agree to recite this prabandham, which has been composed mercifully with overflowing affection on the divine feet of that rAmAnuja muni (sage), by thiruvarangaththu amudhanAr, who has great qualities. This prabandham is in the format of kaliththuRai andhAdhi (a form of thamizh poem in which the last word of previous pAsuram becomes the first word of next).

Your devotees are those who decide that they will recite a specific number of pAsurams and carry out vAchika kainkaryam (service through the faculty of speech) for your divine feet and benefit by that. You should shower your mercy on me so that all the divine names which they recite with overflowing affection towards you, will remain on my tongue, always, without distinction between day and night. Oh the great rAmAnuja who won over people practicing the six different types of philosophies including those who do not believe in vEdhas and those who give wrong interpretation to vEdhas!  This is my prayer, to you.