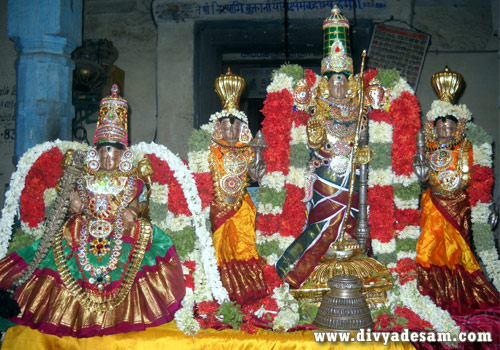 In the eighth decad, AzhwAr observed that ISvaran firmly vowed to act according to AzhwAr’s desire and in turn vowed thinking “to show so much love towards us and to be subservient towards us to fulfil our desire, there is no reason on our side; he has mercifully accepted us without any reason” and  highlights the following aspects:

Meditating upon these aspects, AzhwAr blissfully says “such sarvESvaran fully accepted me, and is residing in thiruppEr to eliminate all my hurdles. and caused experience which gives perfect bliss; what an amazing Seelam (quality)!”

[Though in the last pAsuram of previous decad, he nodded in agreement] In between (in the first nine pAsurams], he waited saying that he will carry AzhwAr with AzhwAr’s divine body; as soon as he agreed to leave behind AzhwAr’s divine body and carry AzhwAr (AthmA) only, he started rushing; he accepted AzhwAr by arriving on the shoulders of thiruvadi (garudAzhwAr) as said in thiruvAimozhi 10.6.5 “sezhum paRavai thAnERith thirivAn” (one who climbs and rides periya thiruvadi who has an attractive form); he arrived on the shoulders of that garudAzhwAr and was set to carry AzhwAr along with him. He gets the AdhivAhikas (those carry AthmAs during their final assent) to carry some AthmAs; he gets garudAzhwAr to carry some AthmAs to paramapadham; but AzhwAr is of the nature that emperumAn himself arrives on garudAzhwAr to carry AzhwAr to paramapadham; as said in SrI varAha charama SlOkam “aham smarAmi math bhaktham nayAmi” (I will remember my devotee and liberate him), only when he sends a messenger to carry the pirAtti in periya thirumozhi 3.7 “kaLvan kol” (parakAla nAyaki, who was taken away by emperumAn himself), will AzhwAr be sent a messenger to be brought to paramapadham! As said in thiruviruththam 26 “nAnilam …”, emperumAn himself consoles AzhwAr en-route to paramapadham saying “I have eliminated this samsAra which is like a desert; we are entering the abode of no return as said in chAndhOgya upanishath 8.15 ‘na cha punarAvarthathE’ (there is no return)“. In this manner, AzhwAr pondered upon emperumAn’s urge in taking him to paramapadham; AzhwAr  wondered as to “What must be the reason for his urge?” He did not see any factor in himself.

AzhwAr meditated upon the following aspects – First emperumAn created adhvEsham (not having hatred [towards emperumAn]) in AzhwAr, specially glanced at AzhwAr due to that [adhvEsham], created desire towards him, created the understanding “I am the exclusive means”, forgave all of AzhwAr’s apachArams [wrongful acts] including the many asahyApachArams (most cruel offenses), made AzhwAr who was engaged in worldly pleasures to say in thiruvAimozhi 6.9.9 “pala nI kAttip paduppAyO” (are you planning to finish me by revealing varieties of pleasures?), created the state of unbearability without him in AzhwAr and he himself arrived to carry AzhwAr to paramapadham; he thought “Why did emperumAn, who is showing great affection towards me today, remain peacefully without me since time immemorial? What is the reason for such affection towards me today?” AzhwAr did not see any reason in him for that. Since AzhwAr did not acquire this result by his own effort, he is not seeing any difference in himself [before and after]; AzhwAr is not of the nature to think that he has become great now in comparison to what he was before. emperumAn too, who has been desiring to attain AzhwAr, will not think that he has done something specific for AzhwAr today. [Thus] AzhwAr thought “Now, let me ask emperumAn if he can give a reason for this as he is sarvagya [omniscient]” and asked him “Your highness! Today you are holding me high on your head; but why did you remain away from me since time immemorial? Why did you accept me today?” emperumAn will not say “I did this since you manifested adhvEsham towards me”; this is because, he knows that even such adhvEsham in AzhwAr was caused by him and since such adhvEsham does not become a matching means for the result which is attained. Now, for the rakshaka (saviour), there is no explanation for not having protected that which is to be protected, other than feeling shy for being late in doing so; thus, due to not having any response, he hung his head in shame and started making lines on the ground with his toes [symbolic of not having an answer].

First emperumAn engaged in the creation etc of universe, and provided opportunity for AzhwAr [and AthmAs] to develop desire towards him; through that, he created the desire in AzhwAr; he himself assumed the upAya bhAvam (being the means) and made AzhwAr come thus far from thiruviruththam 1 “poyn ninRa gyAnam“; he caused the various states of devotion such as parabhakthi, paragyAnam and paramabhakthi. After asking “Why did you not do this earlier?” AzhwAr observed “Since emperumAn has no specific response for this question, he is remaining silent” and meditated upon emperumAn’s such acceptance and his qualities such as krupA (mercy) etc which are the cause for that [acceptance] and became immersed in that thinking “What an unconditional pursuit by emperumAn!” and remained blissfully joyful.