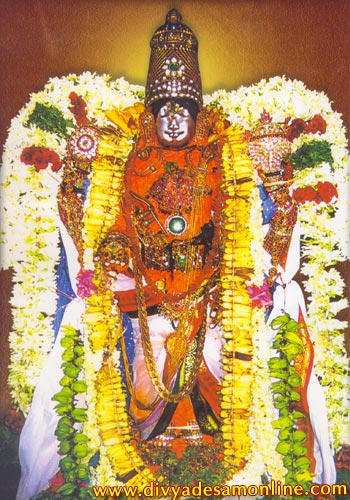 In the second pAsuram, AzhwAr becomes pleased and enjoys the opulence emperumAn acquired after uniting with him.

ennai – me
muRRum – in all ways
uyir uNdu – enjoying the self

(by that)
thAnE Agi – being the primary one
niRaindhu – being complete
ellA ulagum – all worlds
uyirum – the creatures which are present in those worlds
thAnE Ay – to be himself (being the controller, by being the antharAthmA (indwelling super soul), and not just that common principle)
yAn enbAn – being I, the entity which is explained by the presence of consciousness
thAnE Agi – to be himself (due to that inseparable nature)
thannai – on him, who is praised
thAnE thudhiththu – being the one who praises and praising him

(the joy which was acquired by him)
enakku – due to revealing to me
thEnE pAlE kannalE amudhE – being honey, milk, sugar and nectar and all the taste in these objects
thirumAlirunjOlai – mercifully residing in thirumAlirunjOlai
kOnE Agi – being the lord, himself
ninRozhindhAn – remained here without leaving

He is enjoying my self fully in all ways; he is primary and complete; he is all the worlds and the creatures in the worlds [everything is his body]; he is I, the entity which is explained by the presence of consciousness; he is the one who praises and one who is praised; due to revealing all these to me, being honey, milk, sugar and nectar and all the taste in these objects, he is the lord who is mercifully residing in thirumAlirunjOlai, remaining there without leaving. Implies that he remained both the enjoyer and enjoyed.