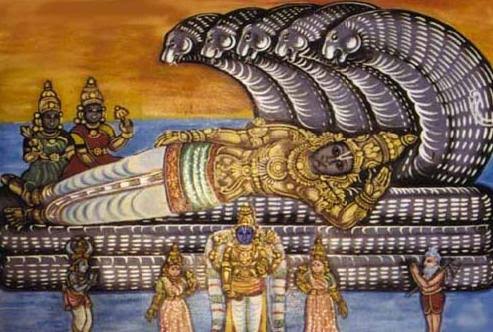 Seventh pAsuram. When asked “How do you know that you have reached him?” AzhwAr says “Can’t you see that my body is smelling of the sandal wood paste applied on him?”

kurai – distinguished
kazhalgaL – divine feet
kuRuginam – we got to reach;

(as said in “nilai pErAn” [in the previous pAsuram],
nam – obedient towards us
gOvindhan – krishNa

(fully, our heart)
kudi – as his residence
koNdAn – accepted;

We got to reach his distinguished divine feet; krishNa who is obedient towards us accepted my heart as his residence; emperumAn is mercifully residing in thiruvAttARu which is surrounded by ocean with well gathered waves, in close proximity, which is like the thilakam for southern region. and which is having gem-studded mansions which are resembling a range of mountains; the fragrance of the nicely smelling thiruththuzhAy with well gathered flower buds which are on such emperumAn’s divine feet, which are ultimately enjoyable like blossomed lotus, is firmly remaining on my body and emanating from my body.