In this way, bhagavAn can be so inclined even towards animals that he gives away himself to them. At the same time, he can be so aloof from even dhEvas that he gives them only lowly fruits. Thus, he is called ‘anAdhi:’. It means that bhagavAn is not accepted (or considered) as the true master by other lowly souls who are behind mundane pursuits.

Etymology: He, who is not considered as the true master by other dhEvas and their followers (people who worship demigods), is called ‘anAdhi:’.

The word ‘bhU:’ means the one who possesses. Here, it represents the knowledgeable one who has realized their true nature of self as being subservient to bhagavAn at all times. For such a realized soul, bhagavAn himself is the destination (the place to be attained – also called ‘bhU:’). Therefore, he is called ‘bhUrbhuva:’ – the destination of the realized one.

bhagavAn himself says thus: “Henceforth, you shall reside in me. There is no doubt in it”

Etymology: Since bhagavAn himself is the destination of knowledgeable souls who have realized their true identity as his eternal servants, he is called ‘bhUrbhuva:’.

Furthermore, bhagavAn is himself all kinds of wealth for such realized souls. Thus, he is called ‘lakshmI:’.

Etymology: bhagavAn is called ‘lakshmI:’ because he is himself all kinds of wealth for self-realized souls.

bhagavAn is the one who protects such realized souls from falling back into samsAra. Thus, he is called ‘suvIra:’ – the mighty one who holds them up at all times.

In other words, he is mighty enough to protect his devotees from all distress.

Etymology: He, who stops such realized souls from falling back to samsAra, is called ‘suvIra:’.

bhagavAn gives away his divine form (or divine body) – which is very charming, beautiful and worthy of enjoying – unto his dear devotees. Thus, he is called ‘ruchirAngadha:’ – the one who has a very charming body.

This is as said in the JithanthA sthOthram (pAncharAthra Agamam) thus: “Oh lord! Your beauty, your divine body, your weapons, your supreme abode, and your supremacy are not for your sake. They are exclusively meant for your dear devotees”

Etymology: He, who gives his own divine and charming form – which is worthy of contemplation – to his dear devotees at all times, is called ‘ruchirAngadha:’.

Thereafter, the purpose of bhagavAn’s divine pastimes and incarnations are explained. bhagavAn provides a body with all faculties to even the non-devotees, and makes them born, so that they also mature over time. He is, therefore, called ‘janana:’.

Etymology: Thence, the purpose of bhagavAn’s divine pastimes is told. He is called ‘janana:’, since he creates bodies with faculties that enable the fallen souls (non-devotees) to reach him.

bhagavAn is the cause of the births of such non-devotees, as well as the goal for their attainment. Thus, he is called ‘janajanmAdhi:’.

Etymology: He is called ‘janajanmAdhi:’, who is himself the ultimate purpose (or goal) for the births of people.

For all those fallen souls who shun such divine grace, bhagavAn turns into ‘bhIma:’ – the cause of pushing them into further cycles of material creation, putting them in naraka, etc.

After all, bhagavAn sees such fallen souls like his enemies, only out of a noble intention of doing good to them.

Etymology: Since bhagavAn is the cause of continued cycles of births in the material creation for all such souls who shun his divine grace, he is called ‘bhIma:’.

bhagavAn is the slayer of all non-devotees, who are engaged in doing evil to the world at large, such as hiranya, et al. Thus, he is called ‘bhImaparAkrama:’.

Such fearful actions are also his way of gracing only. This is just like a mad man being bound by chains for controlling him; for, the same tie down is a big grace for the others who are affected by him.

Etymology: He, who possesses enormous might to control the evil souls who go about doing evil to the world – such as hiraNya and others, is called ‘bhImaparAkrama:’.

prahlAdha, vibhIshaNa, the pANdavas, and others are the ones who support the entire world by their observance of dharma.  bhagavAn is the refuge of all such righteous souls. Hence, he is called ‘AdhAranilaya:’.

The fact that they are the real support to the entire world is shown in many scriptural statements thus:

“Oh bhUma dhEvi! The pious followers of varNa and ASrama principles, whose minds are ever situated in the righteous SAsthras alone, support you at all times. Your entire weight is on them!”

Etymology: The righteous souls such as prahlAdha and others support the entire world by their observance of dharma. He is called ‘AdhAranilaya:’, who is the abode / residence for such righteous souls. 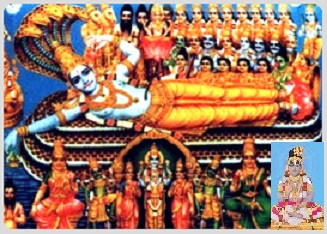