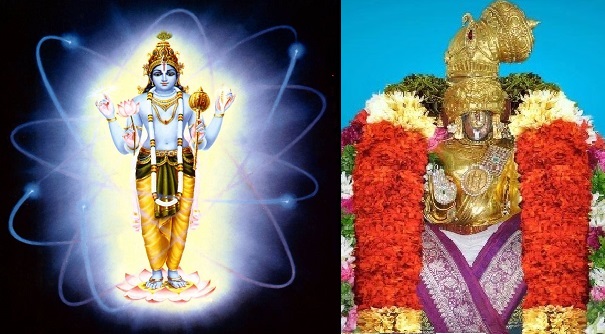 In the fourth decad, AzhwAr manifests unnecessary doubt of separation from ISvara even while he was together with him; for such AzhwAr, due to his overwhelming love towards emperumAn, emperumAn gave union which is devoid of any separation and brought clarity in AzhwAr’s mind; becoming satisfied, he determined “he will remain easily approachable for those who are devoted to him” and to express his acquiring such bhakthi, AzhwAr highlights the following aspects about emperumAn:

Meditating upon these aspects, he becomes pleased thinking about the bhakthi he acquired towards such sarvESvaran which remains as the tool for enjoyment and becomes part of the goal.

Previously – while emperumAn did not have any thought of leaving AzhwAr , AzhwAr became worried due to unnecessary doubt about such separation, and became anguished; emperumAn pacified such AzhwAr saying “I will never separate from you”; AzhwAr sustained himself and became pleased.

In the first decad (thiruvAimozhi 1.1) , AzhwAr fully explained about thathvam (true entities, mainly ISvara thathvam); now, that thathvam will remain the goal as well. The nature of that goal and the result of such attainment of the goal, which is kainkaryam were contemplated by AzhwAr in thiruvAimozhi 10.2.8 “padam udai aravil paLLi payinRavan” (one who is reclining on hooded serpent mattress) and in thiruvAimozhi 10.2.9 “kadaiththalai sIykkap peRRAl” (If we get to sweep his temple entrance) respectively. As that goal was not attained immediately and due to the memory of previous lengthy separation, AzhwAr became anguished; emperumAn considered that incidental sorrow and pacified AzhwAr and AzhwAr became pacified in thiruvAimozhi 10.3 “vEymaRu thOLiNai“.

Thus, in the first decad (thiruvAimozhi 1.1), AzhwAr explained everything that is to be known about thathvam; as that ISvara himself is the goal, he explained the means to attain him, i.e. bhakthi yOgam in thiruvAimozhi 1.2 “vIdumin muRRavum“; he further explained emperumAn as being easily approachable for such devoted persons, highlighting his saulabhyam (easy approachability) in thiruvAimozhi 1.3 “paththudai adiyavar“. In this manner, explaining the way bhakthi [yOgam] which was explained in vIdumin muRRam and paththudai adiyavar, leading to AzhwAr’s goal (emperumAn), recollecting the qualities [of emperumAn] which increased such bhakthi, AzhwAr concludes with prapaththi (surrender) which was explained as the means for his own goal in the first decad [“aruLinan” in first pAsuram, where, by emperumAn’s mercy, AzhwAr surrendered unto him], here. [We can recollect emperumAnAr explaining vIdumin muRRavum in the context of prapaththi in the earlier times and subsequent to writing SrI bhAshyam, he would explain this decad in the context of bhakthi, to hide the confidential matter from others. So, while the bhakthi explained by AzhwAr in vIdumin muRRavum and paththudai adiyavar is sAdhya bhakthi (bhakthi as devotional service) and not as sAdhana bhakthi (means), it can be understood here that bhakthi generally leads to prapaththi and after prapaththi, one will continue performing bhakthi as service. This is explained in great detail in thiruvAimozhi 1.2]

Though AzhwAr has both bhakthi and prapaththi, he considers prapaththi as the only means for the attainment of his goal. Is there any indication of prapaththi in the first decad? He said “aruLinan” in first pAsuram. Now, AzhwAr’s bhakthi is not the same as bhakthi yOgam which is ordained in vEdhAntham; if we consider it to be bhakthi yOgam, then that will contradict with apaSudhrAdhikaraNa nyAyam [SUdhras (persons of 4th varNam) cannot engage in sAdhana bhakthi] [This principle is explained in detail in thiruvAimozhi 1.2]; can we not attribute bhakthi yOgam to him based on his greatness [though he is ineligible for the same]? If we try to do that, it will contradict his own words. His words are along the lines [the concept of prapaththi] as said in “aruLinan” [he granted mercifully]. As said in ALavandhAr’s Athma sidhdhi “ubhaya parikarmitha svAnthasya aikAnthikAthyanthika bhakthiyOgaika labhya:” (bhagavAn is attainable through bhakthi yOgam which is acquired by the heart which was purified by karma and gyAna yOgam), bhakthi is acquired by the one whose heart is purified by karma and gyAna; for AzhwAr, in the place of such gyAna and karma, bhagavAn’s mercy is present and he further acquired parabhakthi [full knowledge] etc [paragyAnam (visualisation) and paramabhakthi (final stage before reaching bhagavAn)]. Further, bhAshyakArar (emperumAnAr) who followed AzhwAr’s footsteps and aimed for AzhwAr’s goal, performed prapaththi and subsequently prayed for bhakthi etc [in SaraNAgathi gadhyam]. Though bhagavAn is the means, if the AthmA has ruchi (taste), that will lead to the attainment of the goal; otherwise, this would not be considered as purushArtham (goal desired by the AthmA); bhagavAn will be the prApaka (means) only for the one who has clearly determined the goal and has unflinching desire for the goal; this is why, AzhwAr’s bhakthi and prapaththi are indeterminable. Thus, AzhwAr explains how the bhakthi which was instructed by him in vIdumin muRRavum and paththudai adiyavar for others, has become the means for the goal, and concludes here by saying how it led to the attainment of the goal. When asked “Can it not be said to have led to the attainment only after the actual attainment [that is reaching paramapadham]?” for now, it is sufficient to be able to visualise that vision; this is similar to how an upAsaka (bhakthi yOga practioner) will enjoy bhagavAn with his qualities here itself as bhagavAn’s qualities are to be enjoyed ultimately. Hence, even during the pursuit stage, there is nothing wrong in meditating upon the enjoyability of the qualities. But “didn’t AzhwAr meditate upon the attainment all along?” Previously, he enjoyed different qualities in different decads; there is a practice of summarising what was highlighted in the beginning; that summarisation is happening here.

Alternatively – piLLAn once explained it as follows. parAnguSa nAyaki said “Don’t go to tend the cows”; he responded “OK; I am not going”; “He is not easy to attain; is it not confirmed that he can only be attained by bhakthi?”

Further, in the first decad, he explained the goal; for that goal, in vEdhAntham, two aspects viz bhakthi and prapaththi are ordained as means; among those two, the bhakthi [yOgam] explained there can only be pursued by thraivarNika (brAmaNa, kshathriya and vaiSya); prapaththi, is sarvAdhikAram (can be pursued by all). In these, prapaththi, which is sarvAdhikAram and accepted as the means by him was mercifully explained in vIdumin muRRavum.  bhakthi which can be pursued by thraivarNikas was mercifully explained in paththudai adiyavar. Thus, AzhwAr explains how bhakthi and prapaththi which were explained in the two decads are leading to the goal in this decad sArvE thavaneRi and the next decad kaNNan kazhaliNai respectively. Among these, in this decad, AzhwAr mercifully explaining how prapaththi leads to the goal is explained. In “sArvE thavaneRikkuth thAmOdharan thaLgaL“, the word “thavam” (thapas) indicates prapaththi. prapaththi is explained as the greatest thapas in thaiththirIya upanishath “thasmAn nyAsam EshAm thapasAm athirikthamAhu:” (Hence, among the penances, surrender is the greatest). The principle explained in SrI bhagavath gIthA 18.66 “sarva dharmAn parithyajya mAmEkam SaraNam vraja I aham thvA sarva pApebhyO mOkshayishyAmi mA Sucha: II” (leave aside all the righteous paths (as means of attaining mOksham) with their traces and hold on only to me as the means; I will liberate you from all your sins. Do not grieve) is mercifully explained by AzhwAr in the 9th pAsuram of this decad “paNdE paraman paNiththa paNi vagaiyE – kaNdEn – kamala malarp pAdham, kANdalumE viNdE ozhindha vinaiyAyina ellAm” (I have seen bhagavAn’s lotus like divine feet through his confidential instructions given and my puNya and pApa fully went away from me) and 2nd pAsuram “irumai vinai kadindhu ingu ennai ALginRAn” (eliminating my puNya and pApa, he accepts my service everyday in this world itself).

Thus, the nature of the goal which is explained in the first decad (thiruvAimozhi 1.1) and the resulting kainkaryam after reaching the goal, was mercifully explained in thiruvAimozhi 10.2.8 “padam udai aravil paLLi payinRavan” (one who is reclining on hooded serpent mattress) and in thiruvAimozhi 10.2.9 “kadaiththalai sIykkap peRRAl” (If we get to sweep his temple entrance); AzhwAr removed the weeds in such kainkaryam by saying in thiruvAimozhi 10.3.9 “idar kedundhORum nAngaL viyakka inbuRudhum” (If your sorrows are eliminated, we will be abundantly joyful) indicating the meaning of “nama:” in the second part of dhvaya mahA manthram, concluded the meanings of first decad in kedumidar and vEymaRu thOLiNai; and in sArvE thava neRi (this decad) and kaNNan kazhal iNai (next decad) AzhwAr is mercifully explaining the principle of bhakthi and prapaththi culminating into the goal, which was explained in vIdumin muRRavum and paththudai adiyavar – this is explained by thirumAlai ANdAn as mercifully explained by ALavandhAr.