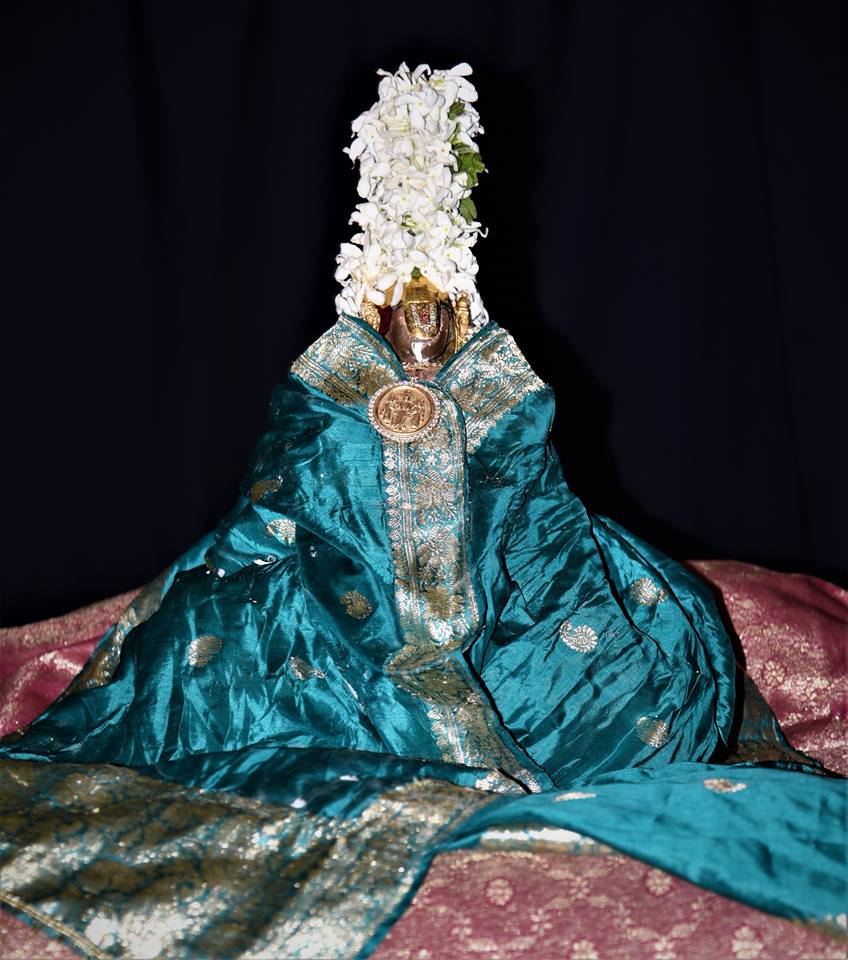 In the end, AzhwAr says “For those who learn this decad, krishNa’s divine feet are easily attainable”.

parama param paranai – the lord of all who has none greater than him
mal – in wrestling battle
thiN – strong
thOL – having shoulder
mAlai – sarvESvaran who is the prApya (goal) and prApaka (means), since he is infatuated towards his devotees
paRRu enRu – determined as the good refuge for us
paRRi – surrendered
vazhudhi vaLa nAdan – nammAzhwAr, who is the controller of thiruvazhudhi nAdu (AzhwArthirunagari region)
sol – mercifully spoke
thodai – in the form of a garland of words
andhAdhi Or AyiraththuL – among the distinguished thousand pAsurams which are in the style of anthAdhi (ending word of one pAsuram relating to the beginning of next pAsuram)
ippaththum – this decad also
kaRRArkku – for those who learnt and practiced
kaNNAn – krishNa who is dhAmOdhara
kazhal – divine feet
iNai – pair
Or – distinguished
paRRAgum – result.

sarvESvaran is the prApya (goal) and prApaka (means), since he is infatuated towards his devotees, who is the lord of all who has none greater than him,  who is having strong shoulder in the wrestling battle; nammAzhwAr, who is the controller of thiruvazhudhi nAdu, determined that such emperumAn is the good refuge for us, and mercifully spoke about him in distinguished thousand pAsurams which are in the form of a garland of words and are in the style of anthAdhi; for those who learnt and practiced this decad among those thousand pAsurams, the distinguished pair of divine feet of krishNa who is dhAmOdhara are the distinguished result.

Thence, the ‘SakthISa’ incarnation of bhagavAn is hailed with the next set of divine names.

bhagavAn clearly shows himself – who is hidden in the various vEdha manthras and Agama – unto his pure hearted devotees. Thus, he is called ‘kruthAgama:’.

bhagavAn’s divine forms can never be comprehended by anyone in their entirety. He takes on a variety of divine forms following the nature of each yuga. Thus, he is called ‘anirdhESyavapu:’ – the one with incomprehensible forms.

The scriptures hail thus: “bhagavAn possesses divine effulgent forms abiding to the nature of every yuga”

Etymology: bhagavAn is called ‘anirdhESyavapu:’ since he possesses divine forms following the nature of every yuga.

Thus, bhagavAn pervades the entire world with his powers of pervasiveness and controlling every entity. Thus, he is called ‘vishNu:’.

The manthra varnas hail bhagavAn as “the one who is omnipotent”

It is said thus in Adhithya purANa “Since all of these worlds are pervaded by the power of bhagavAn, he is called ‘vishNu:’. The root ‘vish’ means to enter”

In the udhyOga parva of SrI mahAbhAratha, it is said thus: “The lord of all worlds is called ‘vishNu:’ since he pervaded all worlds with his feet”

Etymology: Since bhagavAn pervades all worlds with his power (to control every entity), he is called ‘vishNu:’.

bhagavAn slays the offenders of his dear devotees without any delay, using his mace and discus (gadhA and chakram) – which are ever awaiting their master’s order to eradicate such offenders. Thus, he is called ‘vIra:’ – the valiant one.

Etymology: He is called ‘vIra:’, who slays those who offend his dear devotees without any delay.

There is no boundary for bhagavAn in terms of either space or time or objects (which he pervades). Thus, he is called ‘anantha:’ – the endless.

The manthra varNa hails bhagavAn as ‘the one who possesses an endless form’.

The various scriptures hail thus in this regard:

This means that bhagavAn is ever present at all places and in all possible ways.

Further, the lack of such differentiating capacity (to say bhagavAn is present in one object and absent in another) doesn’t imply that bhagavAn is not different from such objects (meaning, it doesn’t prove oneness of all objects with bhagavAn). Rather, it only means that he is totally independent of such objects, but isn’t limited by such references and is all pervasive (he is referenced with every entity present in this creation). Similarly, the same is applicable even in case of space and time. Such an exposition (trying to impose ‘oneness’ using this divine name) is not pleasing.

Etymology: Since bhagavAn doesn’t have any bounds in terms of space, time, qualities or objects, he is called ‘anantha:’.

Not stopping at being unbounded himself, bhagavAn also bestows unbounded wealth upon his dear devotees. Thus, he is called ‘dhananjaya:’ – the victor of wealth.

Which is that unbounded wealth that he bestows upon his devotees? It is none other than himself! bhagavAn puts down material wealth such as gold, gems, etc by showing the intense need for the desire to earn that wealth, the path treaded in the pursuit of such wealth, greed in retaining the wealth, efforts to hide such wealth from robbers, making a living with such wealth, etc. as the primary eligibility (NOTE: bhattar intends to show that there is so much of ‘eligibility’ needed to earn material wealth; whereas bhagavAn is naturally related to each one of us, and hence doesn’t expect such high ‘eligibilities’).

Since bhagavAn wins over such lowly wealth, he is called ‘dhananjaya:’.

Etymology: By increasing the eligibilities to earn material wealth – such as intense desire, the deed of earning, greed in growing the wealth etc, bhagavAn wins over the lowly material wealth comprising of gems, pearls, precious stones, gold, etc (and makes himself available to his devotees as the highest unbounded wealth with no need for such ‘eligibilities’). Thus he is called ‘dhananjaya:’.

In this context, the word ‘brahma’ is used to mean something of a great magnitude. Since every individual soul or sentient entity (chith – चित्) is great due to its ability to enjoy the unbounded bliss in the mOksha bhUmi – which is attained by them according to their realization and actions, such individual soul itself is referred to as ‘brahma’. This is as shown in the various scriptures thus:

Even the insentient entity called ‘achith’ (अचित्), which is the object of enjoyment in this world for every individual soul, and which is inexplicable, is great due to its ability to transform into infinite forms of enjoyment to various souls. Thus, such insentient material is also called ‘brahma’. This is also shown in the scriptures thus: “My creation is this great prakruthi, called ‘brahma’”, etc.

bhagavAn safeguards such sentient and insentient entities by looking after their existence, enjoyments, and all such states of those entities. Thus, he is called ‘brahmaNya:’.

Etymology: The sentient jIvathma and insentient prakruthi are both referenced by the name ‘brahma’. He who is responsible for their existence, enjoyments etc in all of their states is called ‘brahmaNya:’. This seven lettered manthra confers wealth upon the chanters.

Not just stopping at nature or prakruthi, even the derivatives of that prakruthi – such as mahAn, ahankAra, etc – are also called ‘brahma’ due to their vast expanse in this creation. The vEdhas have clearly shown this by saying “thus, this ‘brahma’ gets various names and forms, and transforms into pleasure objects”, etc.

Etymology: The derivatives of prakruthi – namely mahAn, ahankAra, etc – are also called by the name ‘brahma’. The common creator of such objects in this creation (creator of individual objects – called vyashti srushti) is the four faced brahmA. He – by whom that four faced brahmA is controlled at all times – is called ‘brahmakrudhbrahmA’. This nine syllable manthra is capable of bestowing all powers upon the chanter.

In this way, bhagavAn makes the manifest and subtle individual souls (with and without names and forms respectively) seen during the common and specific creations bigger with his infinite auspicious divine qualities. Also, he shows himself as a big entity with his unbounded nature and divine qualities. Since he shows his absolute supremacy over all other entities thus, and since he is hailed by the vEdhAnthas as the greatest entity without any prejudice, he is called ‘brahma’.

The etymologists have shown the meaning of this divine name as “the one who is himself great and also makes the other entities (depending on him) great”.

Etymology: bhagavAn always makes the individual souls in both the manifest and subtle forms during the common and specific creations great by showing them his divine forms, nature, auspicious qualities and the infinite wealth. Hence he is called ‘brahma’. This six syllable manthra confers progeny upon the chanters.

The characteristic of all such individual souls namely ‘dharma’ or righteousness, which is characterized by thapas or contemplation, is also called ‘brahma’.

This is shown in the vEdhic statement that says “thapas is called brahma”.

bhagavAn increases such ‘thapas’ and thereby the resulting ‘dharma’ amongst his devotees. Thus, he is called ‘brahmavivardhana:’ – the increaser of ‘brahma’ (thapas).

Etymology: Since bhagavAn always increases thapas amongst his devotees, he is called ‘brahmavivardhana:’.