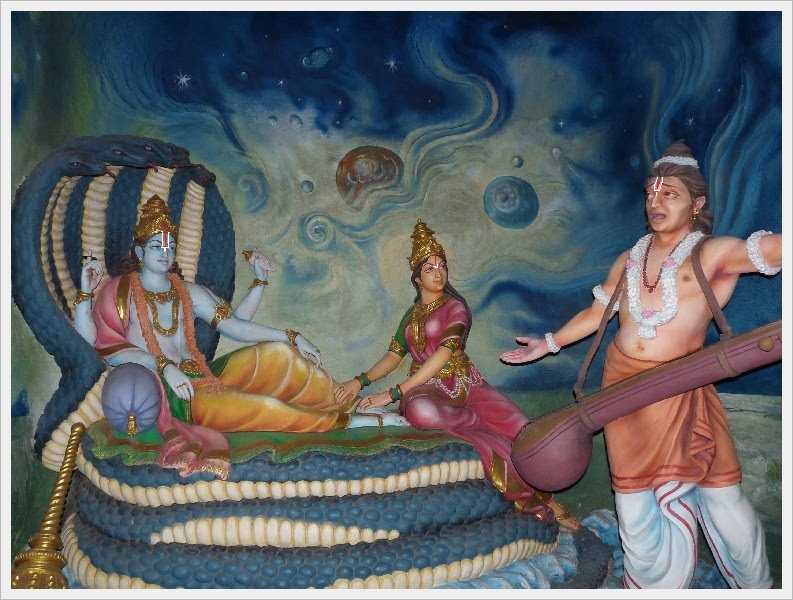 In the sixth pAsuram, AzhwAr says “I got to surrender unto the divine feet of sarvESvaran who is of the nature that he will accept those who surrender today without checking their qualities, as he would accept nithyasUris”.

nAgam – thiruvananthAzhwAn who is eternal servitor
aNaiyAnai – one who is having as mattress
nALdhORum – always
gyAnaththAl – through gyAna in the form of bhakthi
Agaththu – in the heart
aNaippArkku – for the mumukshus (liberation seekers) who place and enjoy
aruL seyyum – doing favours, being ultimately enjoyable
ammAnai – being the lord
mAgaththu – dwelling in the sky
iLa madhiyam – young crescent moon
sErum – uniting
sadaiyAnai – due to having in his matted hair (and hence being enjoyer (due to having the moon) as well as being engaged in penance (due to having matted hair))
pAgaththu – on one side [of his divine form]
vaiththAn than – the ultimately simple one who placed, his
pAdham paNindhEn – I got to surrender unto the divine feet.

emperumAn is having thiruvananthAzhwAn who is an eternal servitor, as his mattress; he is the ultimately enjoyable lord who is doing favours for the mumukshus who place him in their hearts and always pursue him through gyAna in the form of bhakthi, and who enjoy him; he is ultimately simple due to placing rudhra who is having the young crescent moon, which usually dwells in the sky, in his matted hair, on one side of his divine form; I got to surrender unto the divine feet of such emperumAn. The “ai” in the end of “aNaiyAnai, ammAnai” is just for sound and has no specific meaning. Alternative recital – “pAgaththu vaiththAnaip pAdham paNindhEnE“.