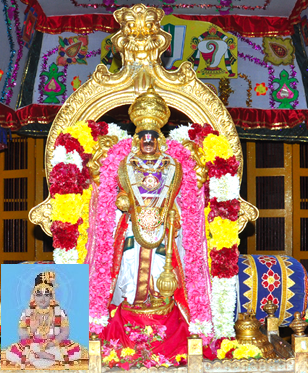 In the first decad, since the previously highlighted kainkarya prathi sambandhithvam (emperumAn being the recipient of kainkaryams) is complete in the special abode of paramapadham,  AzhwAr determined that he needs someone who would guide him in the journey to paramapadham, after eliminating his harmful hurdles in traveling there and highlights the following aspects of sarvESvaran who is residing in thirumOgUr:

Meditating upon these, he determines that only such sarvESvaran will be the best companion and mercifully holds on to the divine feet of such kALamEga emperumAn as the refuge.

AzhwAr said in thiruvAimozhi 9.8.4 “nALEl aRiyEn enakkuLLana” (I don’t know the date fixed for me); ISvaran gave confirmation saying in thiruvAimozhi 9.10.5 “maraNam AnAl” (at the end of this body). If he says “done” and nods his head in acceptance, one can be confident of getting the result and act accordingly. Hence, AzhwAr started planning for the journey; in that journey, one is leaving his body which he is used to, he is leaving behind the relatives whom he is used to, and is going alone towards the abode which is never seen before, which is far away and there are lots of hurdles en route – there are endless hurdles such as avidhyA (ignorance), karma (deeds), vAsanA (impressions), ruchi (taste) etc; to eliminate all of these and to have a companion, one should have sarvESvaran as the companion. Why is that? Should the AthmA not have himself as the companion? [No] Until today, the AthmA engaged in acts that will bind him in samsAra (material realm); though he enquired about the well-being while being in this [final] body, if we observe his previous history of acts, he cannot be a good companion for himself. While guiding through the  journey, the companion should be sarvagya (omniscient) to know about the hurdles which will block AzhwAr; after knowing about them he should be sarvaSakthi (omnipotent) to eliminate them and carry him; as seen in pramANams (scriptures) such as muNdaka upanishath “yassarvagya: sarvavith” (one who knows the basic nature and basic qualities of all entities), sarvESvaran was explained as sarvagya and sarvaSakthi. Even if one is having the ability, if there is no apt relationship, the ability will not be of any use. He is explained as all types of relationship in subhAla upanishath as “mAthA pithA brAthA nivAsa: SaraNam suhrudh gathir nArAyaNa:” (nArAyaNa is mother, father, brother, residence, refuge, well-wisher, goal). As said in periya thirumozhi 7.2.3 “emmAnum emmanaiyum …” (my father and mother abandoned me) etc, worldly parents will beget a child due to their lust and abandon it considering it to be an enemy for their youthfulness; but emperumAn out of real love, will respond in female voice when the AthmA cries out “ammE!” (Oh mother!) and in a male voice when the AthmA cries out “appA!” (Oh father!). As the body becomes useless [after death], he should know the means to carry the soul to paramapadham by eliminating the hurdles which occur in the journey; he should also be capable of severing the enemies who come in the journey; he should also be trustworthy that one shows him as the refuge when one cannot protect the self. He is already well known as “sarvagya, saravaSaktha” as seen in pramANams; AzhwAr himself declared emperumAn as the refuge in thiruvAimozhi 3.6.9 “thanjamAgiya thandhai thAyodu thAnumAy” (emperumAn is the refuge, father and mother, along with them, the self). AzhwAr has personally seen emperumAn’s mercy in thiruvAimozhi 1.1.1 “mayarvaRa madhinalam aruLinan” (emperumAn blessed unblemished knowledge and devotion to me). Now, since he is the SEshi (lord), he is also aptly related. Hence, AzhwAr is determining firmly “kALamEgam emperumAn will eliminate our enemies, guide us up to paramapadham, the ultimate destination”. Just as those who travel through dangerous route will have strong confidantes for security, handover their precious belongings to such companions, and will get those belongings back after reaching safe areas, AzhwAr deposits himself in kALamEgam emperumAn at the time of shedding the body thinking “let me get it back on reaching paramapadham”. Even if emperumAn does not have any of the aforementioned qualities, he is so beautiful that if he starts walking, one will naturally follow him, with the only intent of walking behind him enjoying his beauty. While surrendering, one should surrender unto someone who is feared by the enemies as said in periya thirumozhi 8.10.8 “vaLLalE! un thamarkkenRum naman thamar kaLLar pOl” (Oh generous one! For your devotees, the servants of yama will feel like lowly persons who will stay away in fear). yama himself said in SrIvishNu purANam 3.7.4 “parihara madhusUdhana prapannAn prabhuraham anya nruNam na vaishNavAnAm” (do not approach those who have surrendered to madhusUdhana (emperumAn))