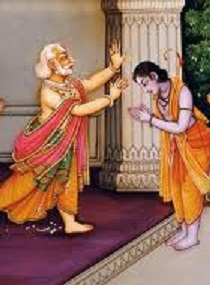 thannudaiya thAdhai – being affectionate towards his father dhaSaratha chakravarthy such that he would think “Isn’t perumAL  one who obeys my authority? He would do just as I tell him to do”. Alternative meaning – son of dhaSaratha.

paNiyAl – He did not reach up to dhaSaratha’s thoughts. dhaSaratha thought “Instead of going to the forest, would he not tie down my legs and my neck and take over ruling of this country?”

arasu ozhindhu – when ordered by dhaSaratha “leave the country and go to the forest”, instead of hesitating “Should I leave this country?” SrI rAma was focussed on being a forest dweller. When he was told that he was going to take charge of the country, people saw that his face had blossomed with a beauty. When he was told that he has to go to the forest, people said that they had seen  aiSwaryam (opulence) which had formed on his face which they had never seen before. It appeared as if when dhaSaratha chakravarthy told him to go the forest, SrI rama felt relieved as if a huge load had been removed from his head, a load which created svAthanthriyam (independence) in him. When bharathAzhwAn caught hold o f SrI rAma’s legs (in chithrakUtam) and compelled him to return to ayOdhyA, SrI rAma behaved as if he had adorned himself with a garland of fresh flowers and removed that garland once the freshness was gone [here, garland refers to the crown worn by kings; SrI rAma was happy that he had removed the crown that he would have worn had he become the king].