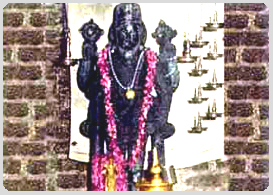 In the first pAsuram, parAnguSa nAyaki tells some cranes how emperumAn won over her by manifesting his beauty and activities and tells them “Please inform him my current state and on return, please place your divine feet on my head”.

em kAnal agam kazhivAy – residing in the salt pan inside the garden on the seashore, to be considered as ours, to be engaged in your service
irai thErndhu – with liking towards the food here, highlighting your great relationship
ingu – in my presence
inidhu – with romantic love
amarum – residing
sem – being reddish as if a decoration for my head
kAl – having feet
madam – having humility to be ordered to fulfil our desire
nArAy – Oh cranes!
thirumUzhikkaLaththu – in thirumUzhikkaLam
uRaiyum – eternally residing there as ASritha sulabha (easily approachable for devotees)
kongu Ar – with abundance of honey
pU – attractive
thuzhAy mudi – wearing divine crown which is decorated with thiruththuzhAy (thuLasi)
em kudak kUththarkku – one who is greatly enjoyable for us due to his heart-captivating activity of kudak kUththu (dancing with pots)
en thUdhAy – going as my messenger

(due to that great favour)
numarOdE – with your wife and children (who are related to you, as said in “guruvadh guruvargaScha dhrastavya:“)
num kAlgaL – your divine feet which walked for my sake
en thalai mEl – on my head, which is the top most limb, which is the apt target for them
kezhumIr – should unite.

Oh cranes who are residing in the salt pan inside the garden on the seashore, to be considered as ours, to be engaged in your service, with liking towards the food here, highlighting your great relationship, with romantic love , having reddish feet as if a decoration for my head and having humility to be ordered to fulfil our desire! emperumAn who is greatly enjoyable for us due to his heart-captivating activity of kudak kUththu (dancing with pots), is eternally residing in thirumUzhikkaLam as ASritha sulabha and is wearing divine crown which is decorated with attractive thiruththuzhAy with abundance of honey; after going to such emperumAn as my messenger, your divine feet which walked for my sake, along with your wife and children should unite on my head, which is the top most limb, which is the apt target for them. Though AchArya is the only upakAraka (benefactor), the gratitude for such favour should stretch up to his descendants. “nArAy” which is in singular, indicates the whole clan.

mannum aRam poruL inbam vIdu enRu – being firmly established as righteousness, wealth, love and mOksham (attaining paramapadham or SIvaikuNtam)
ulagil nal neRi mEmbattana nAngu anRE – these are the four ultimate benefits as said in this world as being attained through correct means.
nAnginum – among these four benefits
pinnai peyar tharum enbadhu – after this physical body is gone [after death], it will get another body (as mentioned in SAsthras)

mannum aRam poruL inbam vIdu enRu ulagil nanneRi mEmbattana nAnganRE – in the world, the four ultimate benefits of aRam (righteousness), poruL (wealth), kAmam (love) and vIdu (mOksham) are the ones which are realised through proper means. Initially it says mannum aRam (firmly established righteousness). aRam by itself means righteousness. Why qualify it with the word mannum aRam? Righteousness is effected by poruL (wealth) and righteousness is the path for attaining kAmam and vIdu (love and mOksham). Hence it is firmly established through these two forms. poruL is the benefit which is also referred to as arththam. inbam is the benefit which is cherished by AzhwAr [here it is the love towards sarvESvaran and not the lower variety of physical love, indulged in by samsAris]. vIdu is the fourth benefit which is spoken of by others.

nAnginum – among these four benefits

pinnaiyadhu pinnai – the benefit mentioned at the end (of the four) is referred to as pinnaiyadhu. pinnai – it will keep getting delayed, saying “later”. There is none who has attained this benefit with this physical form. Could one talk derisively of the supreme benefit which is mentioned as readily available by SAsthras (vEdhams, sacred texts)? Since AzhwAr has the desire to enjoy it with his present physical form, he is mentioning this way. Could one term an experience which he gets after giving up this physical form, going to a very faraway place and enjoying it at some distant point of time as something worthy? No. Even that experience has only been heard from vEdhas and vaidhikas (followers of vEdhas). There is none who has recounted it after seeing or experiencing it.

peyar tharum enbadhu – giving up this physical form, acquiring another and enjoying . This is similar to one person carrying out penance and another person enjoying the benefit of that penance. Alternatively, we can group the verse as pinnaip peyar tharum and the meaning will be as said before.