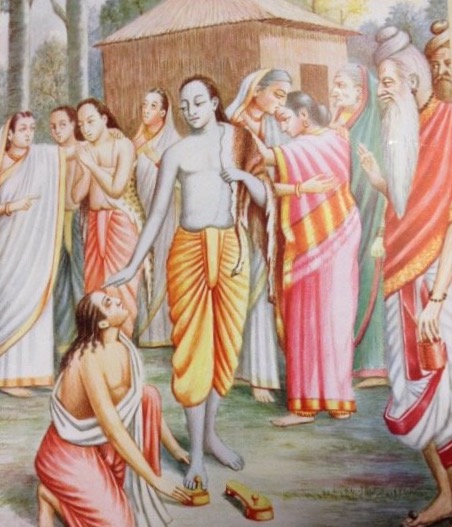 bharathan getting pAdhukA of SrI rAma

vambAr pUm etc. – This is talking about the place (vayal Ali) where the marriage ceremony took place, so that she could join Him in the bed that is AdhiSEsha.

vambAr pUm vayal – Field having flowers full of fragrance; like how His youth is ever-present, the field is also having flowers always like in spring season. Like the young age as said in ‘arumbinai alarai [periya thirumozhi – 7.10.1] (emperumAn who is of the age which is like a bud getting ready to blossom into a flower), this field is also ever like in spring season.

Or, Oh while the place I am in is not having water, flowers, or fragrance and is an empty dry floor, the place He is in, is having buds and sprouts! Since He is staying refreshed, that place is also prospering! Since my place would prosper if I am happy, it is dry now because I am suffering.

maindhA ennum – If He is trying to reject me now why did He show His young beauty and made me His? Earlier when I was interested in worldly matters, you showed your enjoyability and removed my interest in other matters and made me unable to survive without You, which made me say as in ‘vAdinEn [periya thirumozhi – 1.1.1]’ – was that done only to abandon me now?

putkodiyE Adum – (The presence of E (only) in this phrase) shows she is imitating the flag itself instead of periya thiruvadi with emperumAn on his back.

pAdum – Due to the strength born out of imitating him, she became able to open her mouth and speak, and she started calling Him showing her sadness; a song is such that – it is the sound of sorrow that is listened to with tearful eyes; in the same way she too sang loudly with sorrow, that others would hear it with overflowing tears as said in ‘marangaLum irangum vagai [thiruvAimozhi – 6.5.9]’ (such that even the trees would feel for it) – so this phrase uses the word pAdum. Like the taste of pleasantness, the taste of sorrow also would make others be involved in it, isn’t it?

aNi arangam, etc. – As her friend heard her sorrow-filled voice, she considered it and thought – ‘since her mother would advice her good while keeping some distance, she would not be a comforter; since I would speak to her at a closer level I may be able to talk to her and comfort her’, and so as said in ‘Ekam dhu:kam suKhancha nau’ [SrI rAmAyaNam – kishkindhA kaNdam – 5.17]’ (Since you are a very close friend of mine, and so since you have taken a place in my heart, we share our joy and sorrow (said sugreevan when establishing friendship with SrI rAma with fire as witness), since this friend shares the joy and sorrow with her, she with dry hair, lean body, and suffering face such that her sorrow is clearly visible from her form, came and stood in front of her. She sees her face says ‘Oh friend! Would we able to go and experience periya perumAL by going to thiruvarangam periya kOyil?’.

AdudhumO – As said in ‘Esha brahma pravishtoOsmi greeshmE SIthamiva hradham [mahAbhAratham – SAnthi parvam – 171.50] ((told by a saint named ‘mangi’) Like bathing in a cool pond during summer, I immerse in brahmam. I become serene due to that; and I enjoy bliss), since sarvESvaran is referred as a pond/tank, since it [pond and brahmam] calms down one who is having sorrow, and since it helps those who are suffering due to separation, she is asking ‘AdudhumO’ (shall we bathe?)

aNi arangam AdudhumO – Since AzhvArs are capable of saying ‘thollai vEnkatam Attavum sUzhkinRilar [thiruviruththam – 81] to imply the mountain as pond, it is no surprise that they would refer to (kAvEri) river as a pond/tank. It is only for those who are not after anyone other than emperumAn, and who do not enjoy anything other than emperumAn, would this place be of relief from sorrows when they enter it.

thOzhee ennum – Seeing the sorrowful face of her friend, she would say ‘Oh when would we see our face grow rich by going to kOyil (SrIrangam) and bathe in the pond that is emperumAn?’.

If asked ‘She being your daughter born from you, can’t you command and correct her when she performs acts against her proper nature?’ –

en siRagin keezh adangAp peNNaip peRREn – She is out of my control. During the stage of surrendering He Himself rushed to get to you surrendering to Him; so in the stage of enjoying Him too, isn’t it appropriate for you as a female to wait from Him to come to you so that you can enjoy Him?’ – even after I told her this as what I know, she has ignored my advice.

en siRagu – on my side; that is, inclined to my views; since she is now under His side, she has abandoned my views; she has not considered her true nature of being subservient; also she is neither following my advice not is she obedient towards me;

peRREn – (Her mother is) saying these as her own mistake as a mother, instead of making it her daughter’s mistake.

iru nilaththu Or pazhi padaiththEn – This is the use of giving birth to her! I got the huge blame that blankets the whole earth that is fifty crore [miles] wide; would think that instead of waiting for emperumAn to come to them, doing any act from their side to get Him would bring bad name to their clan – such is the greatness of this clan.

Or pazhi – blame with no parallel.

E pAvam – (The mother says) – it is not due to the daughter; nor due to Him; the reason for this blame is my sins only. As bharathAzhvAn said ‘na manTharAyA na cha mAthurasyA: dhOshO na rAjya: na cha rAGhavasya | vana pravESE raGhu-nandhanasya mathpApamEvAthra nimiththamAsIth [these words are not included in available publications of SrI rAmAyaNam] (Reason for SrI rAma going to the forest is not that of manthara, not of my mother kaikEyi, not of my father king, and not of SrI rAma; it is only due to my sins);

(Now the meaning of above SlOka is provided in detail):

na manTharAyA: (bharatha) thought that the reason for sad state of SrI rAma going to forest etc., is due to manTharA that is kUni; upon reflection, he decided that it was not her mistake, but it is of his mother kaikEyi who listened to her words;

na cha mAthurasyA: not his mother’s mistake also; it is that of chakravarthy’s (daSaratha’s) mistake who listened to her words.

dhOshO na rAjyA: – the king does not have any fault; it is only that of the Him who listened to the king and left for the forest even though having rights for the crown;

na cha rAGhavasya: what mistake can be of His? Whereas if He crowned then my honour was to be to serve Him, and my loss of that honour is due to my sins only; and so bharatha concluded that it is all due to his own sins.

vana pravESE raGhu-nandhanasya – The reason for the dear son of dhaSaratha, SrI rAma, who came for this clan to grow with glory, to have gone to the forest is due to my sins only, and there is no other reason – is how bharatha established it.

Likewise, this mother also says ‘it is my sins only that is the reason for this blame’.

(The above SlOkam is explained further more):

SrI rAma knows how much I (bharatha) would be happy when being with Him, and how much I would suffer if I am separated from Him, and also He knows that it is His right to become the king, so what stopped Him from tying up His father into a corner and ruling the kingdom? If He had ignored the words of the king and ruled the kingdom He could have protected me from dying due to separation; so the reason for all this is my sins only – is what bharathAzhvAn concluded.