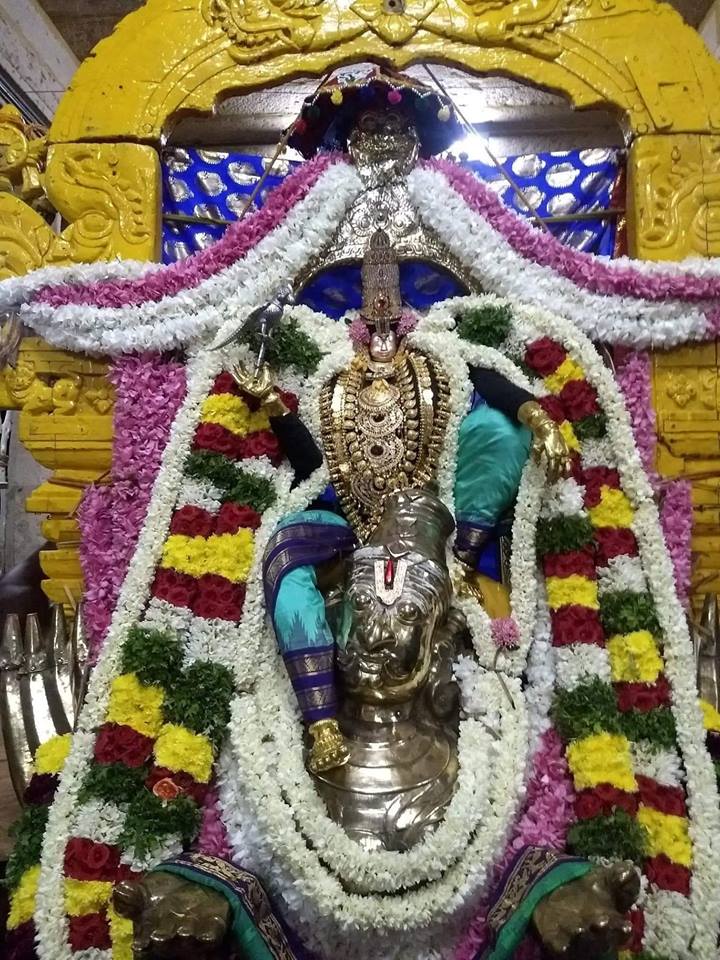 In the sixth pAsuram, when emperumAn says “There are hurdles to fulfil your desires” AzhwAr says “Just as you eliminated the demons such as as mAli with the divine weapons which you are donning to eliminate the dangers of your devotees, you should mercifully eliminate my hurdles as well”.

(as said in “kAlAgni sadhruSa: krOdha:“)
kananRu – with great anger
mun – in front of (the unfavourable ones)
ninRa – standing (showing this beauty)

(due to that)
em – our
idar – sorrow of being unable to enjoy
kadivAnE – oh one who is there to eliminate!

emperumAn riding the very angry periya thiruvadi resembles a dark cloud lying atop the golden mountain of great mEru; he is carrying the five divine weapons which are having anger which resembles the fire of death upon enemies, and is standing with great anger in front of those well-known demons such as the angry mAli, the great sumAli, to kill them; he is being the lord who is having anger which burns the enemies, and who is having the divine crown which is shining due to the destruction of enemies, and who is residing in thiruppuLingudi which is having abundant fields; oh one who is there to eliminate our sorrow of being unable to enjoy! Implies, he should mercifully be present with that vAhana (vehicle), weapons and divine crown, and the shining divine eyes, to be seen by me!