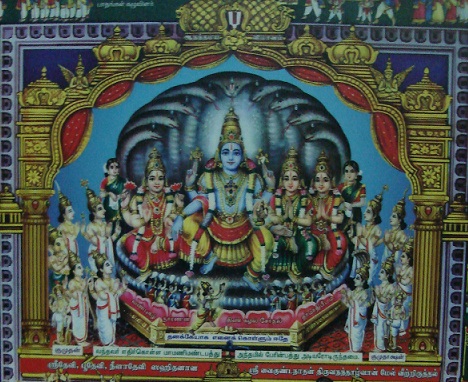 In the third pAsuram, AzhwAr says “emperumAn purely out of his own mercy created desire in me towards him, united with me, showed the nature of AthmA having knowledge, bliss and purity and being sustained with servitude towards him, to make such union remain firm”.

(the one who entered in me by getting my acceptance)
“uNarvum – knowledge in the form of actions
uyirum – five types of prANa (namely prANa, apAna, vyAna, udhAna, samAna which facilitate actions)
udambum – different types of body (for the different types of prANa)
maRRu – further
ulappilanavum – (countless) mahath (the great element), ahankAra (ego), indhriyas (senses) etc
pazhudhu – to be given up”
Am – this
uNarvai peRa – to realise
uNarndhu – conducted
iRa ERi – reaching up to (distinguished AthmA)
yAnum – consciousness and intelligence (which relate to the AthmA)
thAn Ay ozhindhAn – had AthmA as his prakAram (form), to have it fully engage in him.

To reach emperumAn, by his grace, I placed him, the distinguished one who is the controller of nithyasUris who are having abundant knowledge, in my knowledge which is in the form of desire; that desire too was caused by his causeless mercy; he conducted himself to make me realise “the knowledge in the form of actions, five types of prANa , different types of body, mahath, ahankAra and indhriya are all to be given up”, reaching up to the distinguished AthmA to have my consciousness and intelligence, and had me [AthmA, self] as his prakAram, to have it fully engage in him.

When asked “If he is the goal as well as the means, what is your part?” AzhwAr says,

When asked “Is that desire, under your control?” AzhwAr says,