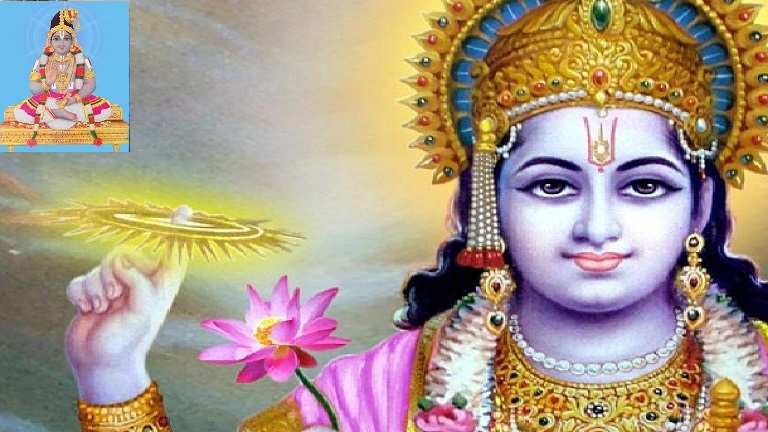 Un parugu nEmiyAy – Oh one who has the chakra (disc) which drinks up the blood of enemies!

puviyum – this world (which is made of primordial matter)

nin agaththa – are under your control

nI – you (who are as mentioned above)

en uLLAy – exist inside me

nAn periyan – am I greater (between the two of us)?

nI periyai – Are you the greater?

yAr aRivAr – who could know?

nI en seviyin vazhi pugundhu avivinRi ennuLLAy – you take your existence in my heart permanently, by entering through my ears.

Un parugu nEmiyAy uLLu – Since you are having the disc, which drinks up the blood of all enemies, in your hand, you have unbridled power of knowledge. Hence, you please give an answer to this query.

For the second part of this pAsuram, another interpretation is provided by knowledgeable persons.

avivinRi yAn periyan – Since I have kept you, who control both the realms, inside me, without any doubt, I am the greater between the two of us.

nI periyai enbadhanai yAr aRivAr – When this is the fact, who will know that you are greater between us?

Since AzhwAr has mercifully called himself as great (periyan) in this pAsuram, AzhwAr is known by the name periyAn in AzhwArthirunagari, the place of his birth. Even though this prabandham has only 87 pAsurams, people will say that this is the reason why it is called as periya thiruvandhAdhi (the great thiruvandhAdhi).

We will move on to the 76th pAsuram next.