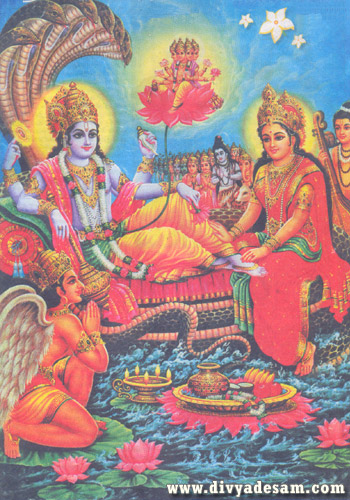 AzhwAr says that since his sins have disappeared, he is able to constantly see emperumAn.

varavu – due to (his) arrival

manam kavalai thIrppAr – one who removes sorrow from the mind

Odham mOdhum – such that ocean will keep lapping

marungE vara ariyarElum – even if he is beyond approach (by us)

orungE – in the same manner

varavu manakkavalai thIrppArai – he will remove sorrow from my mind due to his arrival [at the place where I am present]. This implies that emperumAn, on his own, fell head over heels on AzhwAr and made him his servitor.

Next, the pAsuram says about the place where emperumAn carried out sAdhanAnushtAnam (performing activities as means to attain)

marungu Odham mOdhum maNi nAgaNaiyAr – the opinion here is that emperumAn, thinking of attaining AzhwAr, reclined on the mattress of thiruvananthAzhwAn, in the milky ocean, with the waves gently massaging his feet.

namakku orungE uLLAl avarai eppozhudhum kANalAm – since he dwells in our mind, we can constantly see him in the same manner, through our mind. yajur vEdham 1.6 says “prajApathis thvam vEdha prajApathim thvO vEdha yam prajApathir vEdha sa puNyO bhavathi” (supreme being thinks of one (chEthana, sentient entity); one thinks of supreme being. The one who is thought of by supreme being, undoubtedly, attains supreme being). Thus, it is clear from this that AzhwAr has the greatness to be thought of by emperumAn.

We will take up the 56th pAsuram next.