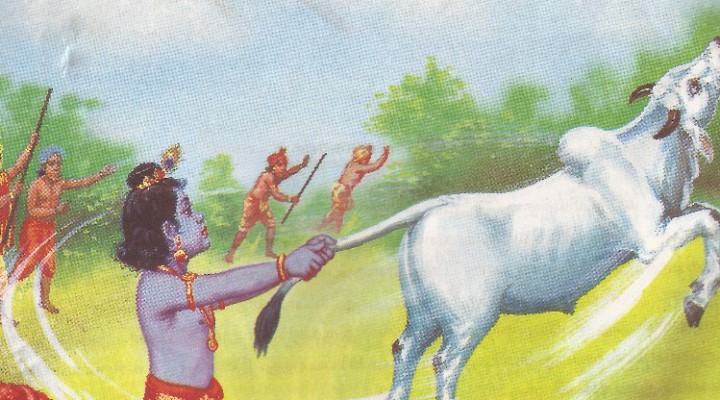 emperumAn asks of AzhwAr “You said that only this experience is great. What happened to the sins which were a hurdle for that experience?” AzhwAr responds “I have not seen the place where they went to”.

kAy udhirththAr – one who made kapiththAsura, who was in the form of a wood apple, to tumble down [as a consequence], his

marungu kaNdilam – we did not see anywhere near us, at all

vAn odungiRRO – did they hide in the sky?

maRi kadal odungiRRO – did they dissolve in the ocean with agitating waves?

kAn orungiRRO – did they hide in the forest?

vAnO maRi kadalO mArudhamO thIyagamO kAnO orungiRRu – Did my sin merge with the sky? Did it dissolve in the ocean? Did it disappear in the wind? Did it get destroyed, entering fire? Did it proceed towards the forest in order to end its life by facing the northern direction, by the method called as mahAprasthAn (a procedure by which a person sits facing north, and ends his life, by observing fast)? Where did it go to, among these places?

van thuyarai marungum kaNdilamAl – since the sin is not anywhere near us, we have to think of these possibilities.

AzhwAr explains further on, as to why the sin ran away. . . .

An InRa kanRu uyarath thAm eRindhu kAy udhirththAr thAL paNindhOm – Manifesting his power of destroying powerful hurdles, emperumAn tossed a demon, vathsAsura, who came in the form of a calf as if it had been born on that day, at a wood apple, in which another demon, kapiththAsura had pervaded, and brought down both. We worshipped the divine feet of such emperumAn. The implication is that the sins ran away because of this.

van thuyarai kaNdilamAl A A –  emperumAn says that he had not seen the sins anywhere. Where did they disappear? Oh my! He calls sins which are the reason for his thuyar (sorrow) as sorrow itself.

We will move on to the 55th pAsuram next.