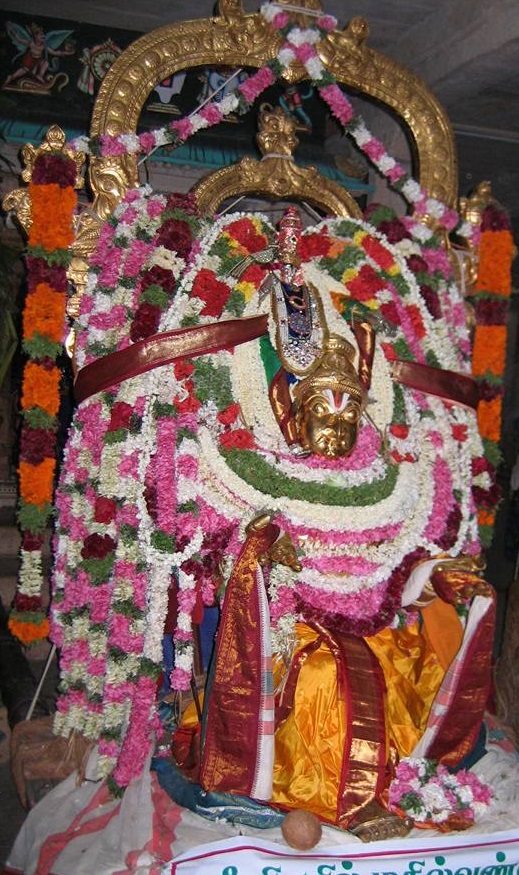 In the first pAsuram, parAnguSa nAyaki is informing that she desires to go to thenthiruppErai due to the suffering she is going through, which is beyond words, to her mother who is enquiring about her state.

Subsequently,  parAnguSa nAyaki is telling her determination to go to thenthiruppErai where emperumAn resides, due to his manifesting his form with the enjoyable weapons, limbs and periya thiruvadi (garudAzhwAn) in her heart.

annaimIrgAL – Oh those who try to keep me away from him thinking “we are your mothers [so we know what is good for you]” (without realising my internal emotions which are beyond the expression of words)!

(for this experience)
en solli – through which words
sollugEn – Will I be able to explain?

praising his qualities and activities as said in “bhAshA kavi kIrthanA:”
piLLaik kuzhA – group of children
viLaiyAdu – play
oliyum – loud noise
aRA – are heard continuously without a break
thiruppEraiyil – in thiruppEreyil
nAn – I
sErvan – will reach

Oh those who try to keep me away from him thinking “we are your mothers!” emperumAn who is having lotus eyes and holding the white, curly SrI pAnchajanya and the divine chakra, is inside my heart riding periya thiruvadi and you don’t know how he does that! Will I be able explain it through words? emperumAn who is shining in my heart which is having the flood of bliss as a result of experiencing him, is manifesting his greatness in the divine abode, thiruppEreyil; the loud chants of vEdham by those who enjoy such beautiful sitting posture of emperumAn, the sound of the musical instruments etc due to the ever occurring uthsavams and the loud noise of the playing of the group of children, are heard continuously without a break; when will I reach there?

They ask “If we don’t have the eyes to see and the ears to hear, what are you planning to do?” She says I am going to the town where those who advice and try to withdraw me from him are not present. This abode [thenthiruppEreyil] is an abode which will not let one think about those [parents, friends etc] who separated as said in chAndhOgya upanishath 8.12.3 “nOpajanam smaran idham SarIram” (AthmA will not contemplate about the material body after reaching the spiritual realm).