emperumAn, though knowing the steadfastness of AzhwAr [in emperumAn], wanted to hear this from AzhwAr himself. Hence he asks him “We hear that there are other deities too who carry out deeds for the sake of their followers. You could attain them”. AzhwAr responds saying “rudhra is the witness for the fact that I do not worship other deities and that they are not capable of granting mOksham”.

kadalvaNNA – Oh emperumAn who has the complexion of an ocean!
yAn thozhuvAr maRRu oruvaraiyum inmai – there is none in the matter of my attaining any deity (other than you)
kaRRuchchadaiyAn – rudhra who has matted hair
karik kaNdAy – see that he is the witness
yAn – this servitor (me) who worships only you
unnai – you
eRRaikkum – forever
kaNdukoLkiRkum ARu – to keep on worshipping you
kaNdu koL – you have to bless me.

kaRRaich chadaiyAn – the witness is rudhra who has matted hair, which is indicative of the fact that knowledgeable people will not attain him as a supreme being and that he will go in search of ignorant people and make them worship him.

kaRRaichchadaiyAn karikkaNdAy – it is not unknown to you (emperumAn), the omniscient. If at all you need a witness for it, you can ask your grandson rudhra [emperumAn created brahmA, who becomes his son, and brahmA created rudhra who becomes his son, thus rudhra is emperumAn’s grandson]. kari – witness; one who saw in person.

It can be said that AzhwAr reminisces an incident that occurred in his life. One day he was sitting in thirumazhisai, meditating on emperumAn, when rudhra, along with his consort pArvathi, was going atop his vehicle, bull, in the skies. Looking at thirumazhisai AzhwAr pArvathi asked rudhra as to who he was. rudhra said that it is thirumazhisai AzhwAr who had left their philosophy and gone over to SrIman nArAyaNa. pArvathi said that in that case they should grant him their dharSan (audience) and boon. They thus descended to earth and appeared in front of AzhwAr. After looking at them, AzhwAr did not bother and started sewing a torn cloth. Siva asked him “I came to shower our mercy on you. Why are you indifferent?”. AzhwAr responded “There is nothing that you can do for me. Hence I am not bothered”. rudhra continued saying “our coming here should not go waste. We have to grant you something. Hence, ask for whatever you want”. AzhwAr said “In that case, grant me mOksham”. rudhra said “mOksham can be granted only by SrIman nArAyaNa. Hence ask for something else”. AzhwAr said “In that case, grant me a long life so that I can stay on in this earth for a long time, carrying out penance towards SrIman nArAyaNa and attaining mOksham”. rudhra said “Long life is dependent on your karma (past deeds). I cannot grant that. Ask for something else” to which AzhwAr responded with a derisive smile “grant me a boon that the thread will come behind this needle when I sew this cloth”. On hearing this, Siva became very angry and vowed “I will make this egoistic person to lose his form and burn him”, opening his third eye in the forehead. Fire started spitting from his third eye. thirumazhisai AzhwAr opened his third eye which was below the big toe on his right foot and the fire emanating from his third eye started putting out the fire from rudhra’s third eye. rudhra unlocked dark clouds from his matted hair so that they will put out the fire created by AzhwAr. Despite a deluge like appearance, nothing else happened, with AzhwAr, not bothered about anything, carrying on with his meditation. Looking at this, rudhra was amazed, gave AzhwAr the title of bhakthisArar (essence of bhakthi), praised AzhwAr and returned to his place. Reminiscing all these, AzhwAr said kaRRaichchadaiyAn karikkaNdAy.

emperumAn asks AzhwAr “What should I do for your having total devotion towards me?” . . .

eRRaikkum kaNdukoL kaNdAy kadal vaNNa yAnunnaik kaNdu koLkiRkumARu – all that I want is that I should be like this, without any contact with other deities and being totally devoted to you.

eRRaikkum – it is not only in this birth, but in all the births hereafter, I should be  totally devoted to you, and not worship anyone else even by mistake.

eRRaikkum yAnunnaik kaNdukoL kiRkumARu kaNdukoL – Just as it is mercifully mentioned in jithanthE SlOkam 12 “dhurgathAvapi jAthAyAm thvadh gathE mE manOratha: I yadhi nASam na vindhEtha thAvathAsmi kruthI sadhA II” (even if my focus towards you goes into a very low level, if it is not destroyed totally, I will be very much thankful to you) and in jithanthE SlOkam 13 “na kAma kalusham chiththam mama thE padhayO: sthitham I kAmayE vaishNavam thu sarvajanmasu kEvalam  II ” (my mind which is engaged with your divine feet is not disturbed by desire in other matters. I desire only for the quality of being a vaishNavan in all births), I desire only this benefit of not forgetting you ever and being your follower forever. There is no compulsion to grant me mOksham.

eRRaikkum kaNdukoLkiRkumARu – if I get to see you here itself what nithyasUris see in SrIvaikuNtam “sadhA paSyanthi” (constantly seeing), what is the compulsion to go there?

kadalvaNNA kaNdukoL – you [emperumAn] who are capable of removing all the hurdles, and who showed your divine form and created unwavering devotion towards you, should establish this quality of being totally dedicated towards you.

We will take up the 27th pAsuram next.

In the fourth pAsuram, AzhwAr says “You are bewildering me by manifesting the sensual pleasures through Sabdha (sound) etc to make me not know that you are the infinite goal”.

Subsequently, AzhwAr says “You who are able to accomplish impossible tasks, are bewildering my mind with the senses and are ensuring that I don’t reach your enjoyable divine feet”.

(without any expectation)
inRi – without leaving anything behind
nin – your
agampAl – inside your divine stomach
odukki – placing them in a corner
Or – a (one which cannot be traced to a location where it sprouted from)
Alin – peepal tree’s
nIL – stretched out (due to having blossomed)
ilai – the leaf
mIdhu – on top of
sEr – reclining (without realising that he is in the dangerous deluge)
kuzhavi – having childishness
vinaiyEn – my, who is embodiment of sin
vinai – sin
thIr – eliminating
marundhE – oh one who is the medicine!
Or – having distinguished strength
aivarai – the five senses
kAtti – showing
nAn – I (who am having the qualification for the ultimate goal)
sUdhu – apt goal
aRiyAvagai – to not know
suzhaRRi – to bewilder in the worldly pleasures
un – your (you, the companion in dangerous times)
adip pOdhu – infinitely enjoyable divine foot which is like a lotus
nAn – I (who has no other refuge)
aNugA vagai – to not reach
seydhu – do
pOdhi kaNdAy – moved away from my vision

emperumAn is placing all achEthanas and chEthanas in his divine stomach in a corner, without leaving anything behind and is reclining on top of a peepal tree’s leaf, with childishness; oh such emperumAn who is the medicine for eliminating the sin of me, who is an embodiment of sin! You are showing me the five senses which have distinguished strength, to not know the apt goal and to bewilder me in the worldly pleasures; you ensured that I do not reach your infinitely enjoyable divine foot and have moved away from my vision.

emperumAn says “It is difficult for me to do whatever you are saying”; AzhwAr responds “Yes, [as if] you have never accomplished any difficult task”.

Do we need to highlight a historical incident to prove that you can do the impossible tasks? [We have one example in myself] 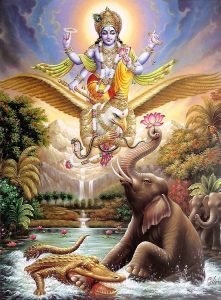