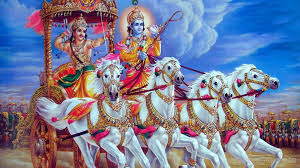 In the third pAsuram, parAnguSa nAyaki says to a swarm of bees “You inform my state to emperumAn, return to me and live on top of my head”.

Subsequently, parAnguSa nAyaki says to some swarm of bees “As you go on behalf of me, krishNa, the destroyer of the enemies of his devotees, will behold you on his head; you would become refreshed; you return to me and suck the fresh flowers on my hair, which were decorated thinking ‘he is coming’ “.

Oh swarm of bees who are mutually close to each other! Having drunk the pure honey from the invigorating thiruththuzhAy which is decorating the divine hair of krishNa, the great benefactor, who destroyed the horses which were having beautiful movements, tall chariots and the army to become dust particles, for the five pANdavas who were the leaders of kurukshEthra! Coming here immediately with the same mouth, suck the best flower which is on my radiant hair.