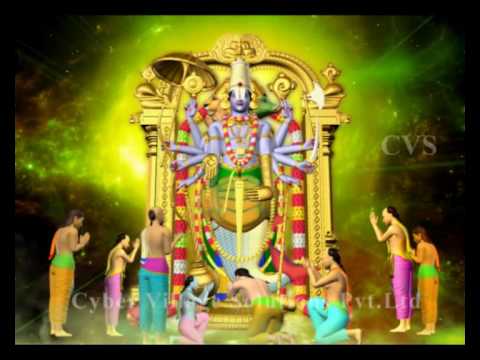 AzhwAr says “Isn’t it at thirumalai that one can have dharSan of and experience emperumAn, the head of indefatigable nithyasUris!”  (he says, hasn’t emperumAn taken residence at thirumalai so that we can look at the great emperumAn and worship him there!).

kunRu onRinAya kuRamagaLir – hanuman, due to his devotion towards SrI rAma, did not wish to leave this world and go to paramapadham (SrIvaikuNtam) [since SrI rAma walked around only on this earth and he wanted to keep seeing these places]. nithyasUris [permanent dwellers of paramapadham) who do not have any connection with this world, reside permanently at paramapadham. However, the hilly womenfolk who live in thirumalai, will leave out both of these and reside permanently in thirumalai.

kunRu onRinAya kuRamagaLir – the hilly women who have only this (thirumalai) hill. They will consider even going down the hill as a slander on their clan.

senRu viLaiyAdum kOL vaLai kai – when these hilly women go out and play, their hands with beautiful bangles

thIngazhai venRu – their hands will be victorious over bamboo shoots in their roundness and tenderness (since their hands are very beautiful, they will be superior to bamboos).

pOy viLangu madhi kOL vidukkum – going beyond that, their hands will prevent rAhu (one of the nine plantes) from catching the radiant moon and remove the hurdle that befell moon. It is implied that the beautiful hands of hilly women will easily defeat bamboo and will also remove moon’s difficulties. Alternatively we can say that the bamboos, which are in the beautiful hands of the hilly women with bangles (bamboos are bent by the hilly women in order to make cradles and play in them), will reach up to sky and remove the difficulty of moon. Another explanation – the radiance from the bangles worn by these women will remove the darkness from bamboo plants where even moon’s rays cannot enter [the bamboo plants are such dense] and remove the blot of moon too. In the meaning given first, it is implied that since moon is within hands’ reach of the hilly women, they will wipe off the blot from the face of moon (the thirumalai hills are so tall that they will reach up to the moon).

mElai iLam kumarar kOman idam – it is the place of the head of those who are residing far above [in SrIvaikuNtam] and who are always young because they constantly enjoy emperumAn. Aren’t those who are in SrIvaikuNtam always 25 years of age, just as emperumAn himself! thirumalai is the dwelling place of such emperumAn.

We will take up the 73rd pAsuram next.