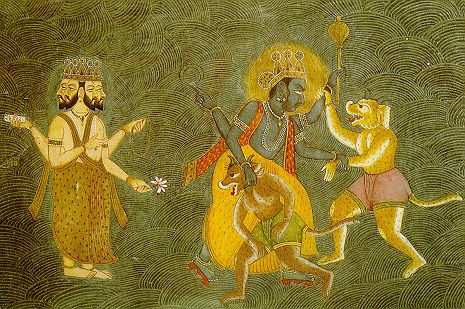 AzhwAr asks whether it is a matter of pride for emperumAn that he had to assume a form and come down to earth to destroy an enemy (iraNiyan). He says “Did he not destroy enemies (two demons madhu and kaitabha) when he was reclining in his place half asleep? ”. Is it a matter of pride for him to kill an enemy when he is fully awake? He says “Isn’t he capable of destroying his enemy even when he is not attentive and half asleep!”.

kAyndhu iruLai mARRi kadhi ilagu mA maNigaL – when the gemstones present on the hoods of AdhiSEsha emit radiance, the rays will remove darkness with a fury. In other words, they will manifest their anger. It is not that emitting radiance is their nature, but it appears that even as they think that they should remove darkness, they carry out the act immediately.

Eyndha paNakkadhir – the radiance emitted by the rays coming from the appropriate gems in the spread hoods of thiruvanthAzhwAn (AdhiSEshan) will remove darkness with a rage.

kadhir mEl – on top of that radiance

vevvuyirppa – even as he breathed heavily. thiruvananthAzhwAn was very happy since he was together with emperumAn and as an outlet of that happiness he was inhaling and exhaling deeply.

vAyndha madhu kaidabarum vayiRu urugi mANdAr – the demons madhu and kaitabha who came there at that time got killed even as their bowels started rotting.

adhu kEdu avarkku iRudhi Angu – that (act of coming there) itself became ruinous for them and they got destroyed. AzhwAr says “Oh my! It is good that it happened to them”. periyAzhwAr too, in the manner of yaSOdhA, has mercifully mentioned in his periyAzhwAr thirumozhi 3.3.7 “enRum en piLLaikkuth thImai seyvArgaL anganam AvargaLE” (those who carry out misdeeds towards my son will end up with the same fate).

Angu – in that place. The same place, where emperumAn has taken residence, which was responsible for AzhwAr to live and sustain himself, became the reason for madhu and kaitabha, who were having wrong ideas, to get destroyed. While being with emperumAn is the reason for people of the world to realise their natural characteristics, in the case of the demons madhu and kaitabha it became the cause for their death. Just as it is mentioned in chAndhOgya upanishath 8.12.2 “paranjOthirupasampadhya svEna rUpEna abhinishpadhyathE” (he [a chEthana, sentient entity] approaches the greatly radiant nArAyaNa and attains his svarUpa (natural characteristics) blossoming), while the favourable entities attain their svarUpam, for the enemies madhu and kaitabha, their evil thoughts became the reason for their destruction.

We will move on to the 67th pAsuram next.