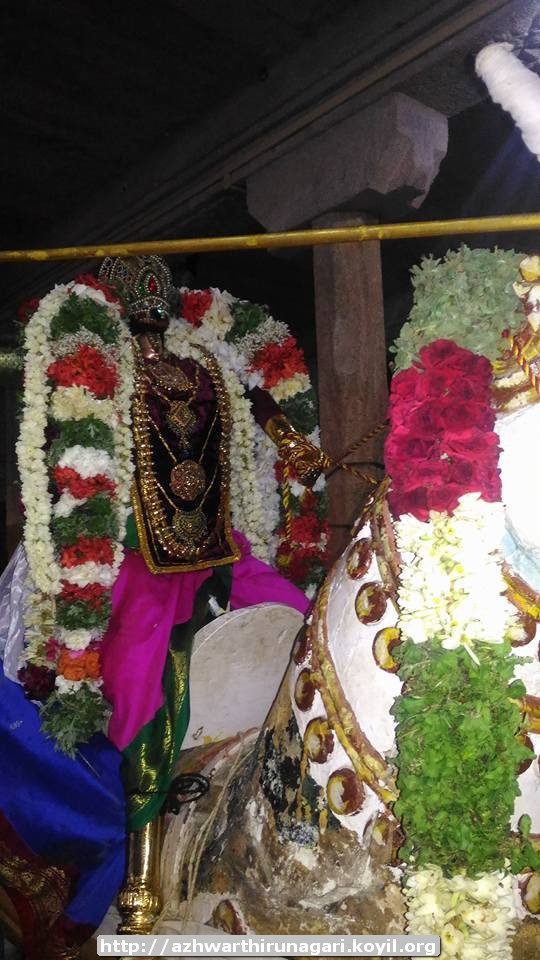 In the third pAsuram, parAnguSa nAyaki‘s mother says “How will she grieve when she nears thirukkOLUr?”.

Subsequently, parAnguSa nAyaki‘s mother says “How will parAnguSa nAyaki who considers recital of bhagavAn’s divine names to be as good as all the joy she acquires while playing with her beautiful objects such as mynA, ball etc, be grieving on not having her desires fulfilled after reaching thirukkOLUr?”.

(as he did not come out, welcome, see, converse and embrace to pacify her)
kOvai – like kOvai (a reddish) fruit
vAy – lips
thudippa – to tremble
mazhai – have lots of tears like rain
kaNNOdu – standing with eyes
en seyyum kolO – what will she do?

My daughter who is uplifting herself only through the recital of SrIman nArAyaNan‘s divine names in place of the joy acquired by the mynAs, green parrots, ball, small wooden pot and the baskets used to keep the flowers, even after this joy of reciting the divine names is available, only went to thirukkOLUr which is having cool water bodies; what will she do standing there with her trembling kOVai fruit like lips and the eyes which have lots of tears like rain?

As mentioned in the 12th pAsuram “aRivennum thAL koLuvi”, being victorious over sensory perceptions is a very difficult task indeed. Unless [emperumAn is] seen in person, it is not possible to defeat sensory perceptions. But this is not possible [seeing him]. Thus, for those who are asking “don’t we have a way to enjoy emperumAn?”, AzhwAr mentions about a way which can be followed even by people without strength. emperumAn has taken residence in thirumalai to overcome the shortcoming of being difficult to be seen. AzhwAr says that one can attain his divine feet and see him. Has it not been mercifully mentioned by thirumangai AzhwAr in thirukkuRundhANdagam 19 “kaNdiyUr arangam meyyam kachchi pEr mallai enRu maNdinAr uyyalallAl maRRaiyArkku uyyalAme” (one cannot sustain oneself without attaining archAvathAra emperumAn (emperumAn in deity form in various divine abodes)) and in thirukkuRundhANdagam 18 “vidhiyil kANbAr meymmaiyE kANgirpArE” (could those who try to see him on their own efforts really see him?)! AzhwAr says that divine abodes are there to control sensory perceptions and to sever us from various worldly pursuits.

mangaiyar thOL kai vittu – getting rid of the connection with all other matters [worldly pursuits]. Getting rid of the desire with the shoulders of women, which can land one in naragam (hell).

nARpAla vEdhaththAn – one who is described vividly by the four vEdhas.

If he is to be known only through vEdhas, will it not be difficult to see him for those who are seeing only worldly pursuits?

vEngadaththAn – he is standing in thiruvEngada malai (the divine hills of thirumalai) so that he can be enjoyed through eyes [for everyone]. In that case, is he also one among the worldly pursuits?

viNNOr mudi thOyum pAdhaththAn – one who is standing like this is desired by nithyasUris too. His divine feet are such that even nithyasUris, who have absolutely no connection with materialistic realm, will desire and attain him here. Even though emperumAn lowers himself for the sake of samsAris and takes residence in thirumalai, his divine feet retain their greatness such that nithyasUris will come here and bow down to him.

We will take up the 15th pAsuram next.