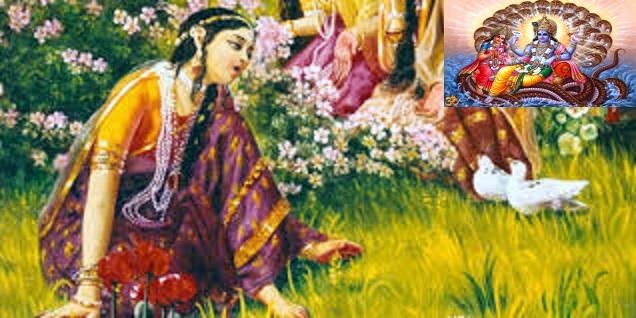 In the sixth decad – AzhwAr having become attached to emperumAn through his three faculties (mind, speech and action), highlights the following aspects of emperumAn who caused such attachment:

Meditating upon these aspects, due to the great subservience occurred in him out of great attachment towards such sarvESvaran, AzhwAr considered all his belongings to be totally existing for emperumAn and gave up all attachment towards them. This state of AzhwAr is explained blissfully by those who care for him. This is presented in the following manner – a  foster mother is explaining the state of her daughter who is in deep sorrow due to separation from her lord and who is losing the beauty of her ornaments, [physical] beauty and her qualities.

The state which parAnguSa nAyaki had previously [in previous decad] became severe, leading to great distress and she fell unconscious. Her friend looked at her, became distressed and she too fell unconscious. Even at this stage, her mother who is sustaining herself, thinking about the ways to redeem her, sees that her bangles etc breaking and calls them out individually. This is similar to when someone sees a town burning, he would cry “Oh a mansion broke down! Oh a palace broke down!” and so on (Here, she is talking about what her daughter lost by the fire of separation). In the previous decad, how her mind, speech and actions became greatly attached to emperumAn due to not attaining him, was explained; here the total subservience she acquired due to not attaining him, is explained. He captured her in this manner by showing his attachment [towards her] as said in “nedumAl enRE ninRu kUvumAl” (call out saying “Oh nedumAl“, nedumAl – greatly attached, the most supreme); when someone great lowers himself, it cannot be tolerated. As said in SrI rAmAyaNam yudhdha kANdam 19.1 “rAghavENa abhayE dhaththE sannatha: …” (When SrI rAma gave refuge, the most intelligent brother of rAvaNa, SrI vibhIshaNa looked at the earth and offered obeisances), his attachment is so great to flatten AzhwAr.

After the distress became too much due to not acquiring the experience which was eagerly awaited, the previous state became severe, the knowledge about relationship with emperumAn became the cause for weakness instead of sustenance, not getting confused in the firm conviction on emperumAn being the means, due to great subservience which is a result of not attaining the goal, AzhwAr is meditating how his self and the belongings which he discarded in thiruvAimozhi 4.8 “ERALum iRaiyOnum“, are getting finished naturally.