AzhwAr is asking whether those who got to see emperumAn through their own efforts, by observing other means, could equal him who got to see emperumAn through his mercy. To reach emperumAn who does not have anyone superior to him or even equalling him, shouldn’t one follow a means which is like emperumAn himself – without anything superior or equal to it? (is there any such means other than emperumAn’s mercy!) AzhwAr says that when compared to the benefit that he had obtained through emperumAn’s mercy, those who had attained emperumAn before him have not got anything.

navinRu uraiththa – (through other means, reciting) emperumAn’s divine names for a long time
nAvalargaL – poets
nAL malar koNdu – taking flowers which had just then blossomed
AngE payinRu – approaching that emperumAn closely
adhanAl peRRa payan enkol – what is the benefit (that they had) thus obtained?
payinRAr tham – those who carry out efforts through other means [than emperumAn’s mercy]
mey thavaththAl – the penance that they carry out with their physical bodies
kANbariya – one who is impossible to see
mEga maNivaNNanai – emperumAn who has the complexion of cloud and blue coloured gem
yAn – adiyEn (the servitor, I)
inRu – now
eththavaththAl kol kANban – with which penance will I see?

nAvalargaL – entities such as brahmA et al, who desire other benefits

AngE payinRadhanAl peRRa payan enkol – what benefits did such people get after attaining emperumAn? The benefit which a person obtains with his own efforts is not a benefit at all.

payinRAr tham – those who carry out means with their own efforts, i.e. those who attain emperumAn this way.

kANbariya mEga maNivaNNanai – emperumAn, who is difficult to see through their own efforts, who is having the complexion of cloud and blue coloured gems, who has a divine form which removes the fatigue of those who see him

yAn eththavaththAl kANban kol inRu – what penance did I, a very lowly entity, carry out and see him? I saw him because he chose to show himself to me. It is only this much and nothing else. AzhwAr says that despite not carrying out any effort, he was able to see emperumAn because of his natural grace. Just as nammAzhwAr said of himself that there is none like him as in thiruvAimozhi 4-5-8 “yAr nigar agal vAnaththE” (who, in SrIvaikuNtam, can equal me?) and as in thiruvAimozhi 4-5-9 “vAnak kOnaik kavisolla vallERku ini mARu uNdO” (is there anyone who can substitute me in singing paeans on emperumAn?), this AzhwAr too is asking if there is anyone who is his equal.

kANban kol inRu – unless I had known yesterday that I am going to see emperumAn today, how could I find a reason for this? He says that he got to see emperumAn who is causeless, only with the sheer grace of emperumAn.

We shall move on to the 87th pAsuram next. 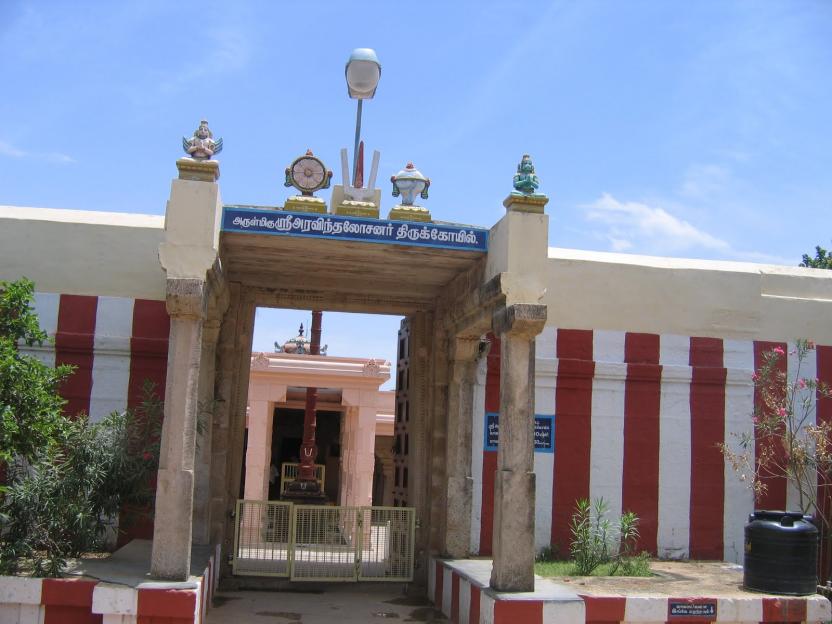 In the first pAsuram, parAnguSa nAyaki‘s friend says to the divine mothers of parAnguSa nAyaki “You who showed her thiruththolaivillimangalam knowing her nature well, trying to advice her now [to come back] is of no use”.

In the first pAsuram, parAnguSa nAyaki‘s friend says to the divine mothers of parAnguSa nAyaki “You should not desire for her who has enjoyed the thiruththolaivillimangalam  where aravindhalOchanan emperumAn is residing and got captured in his distinguished symbols, please give up”.

In the first pAsuram, parAnguSa nAyaki‘s friend says to the divine mothers of parAnguSa nAyaki “You who showed her thiruththolaivillimangalam not knowing her nature well, trying to advice her now [to come back] is of no use”.

thuvaL il – unblemished
mA – precious/valuable
maNi – built with ruby
mAdam – mansions
Ongu – highrise
tholaivillimangalam – thiruththolaivillimangalam
thozhum – worshipping
ivaLai – parAnguSa nAyaki
nIr – you who brought her over and showed her
ini – after she having become greatly attached
annaimIr – who remain “we who have given birth to her can order her”
umakku – for you
Asai – desire to control her
illai – should not have;
vidumin – give up the thought that she is obedient;

(due to fatigue)
ninRu ninRu – sustaining (the self, moment after moment)
kumuRum – weep internally being unable to cry out loudly to express her sorrow.

Oh mothers! You brought parAnguSa nAyaki over to thiruththolaivillimangalam which is built with highrise mansions built with unblemished, precious/valuable ruby gems and showed her the same; subsequently she has become greatly attached to that [divine abode]; you who remain “we who have given birth to her can order her” should not have the desire to control her and give up the thought that she is obedient; talking about the attractive white divine conch and divine disc and very expansive, lotus, divine eyes [of emperumAn], she is having tears in her beautiful neydhal flower like eyes, sustaining herself and is weeping internally being unable to cry out loudly to  express her sorrow. dhavaLa (whiteness) and oNmai (attractiveness) can be considered as attributes for Sanka and chakra respectively.