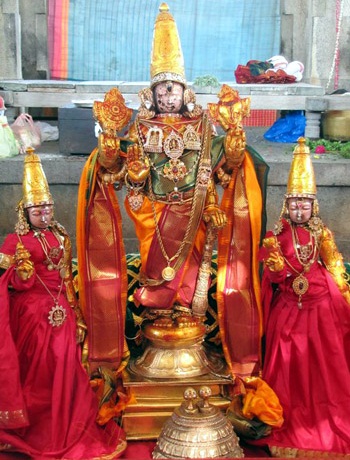 AzhwAr says that emperumAn who is the reason for the creation of all the worlds and is the refuge for all the worlds entered all the parts of his body, from his dwelling place at thiruvaththiyUr (kAnchipuram). He talks about how he exists without knowing anything other than emperumAn.

dhAnavanai vannenjam kINda – he tore the strong heart of iraNiyan who proclaimed himself as God.

van nenjam – iraNiyan had a heart which had no compassion either towards emperumAn or his followers. He had a heart which will not hesitate to carry out a disrespectful deed towards emperumAn or his followers. Even when he saw the fearful form of narasimha, his heart did not soften. One can even assume that it was so hard that even chakrAyudham (emperumAn’s divine disc) could not crack it open.

maNivaNNan – emperumAn has a form which removes fatigue, with the happiness that with  iraNiyan destroyed, the enemy of prahlAdha had been destroyed. This implies that emperumAn’s form is like a blue coloured gem, being very soft and great.

munnam sEy UzhiyAn – Just as it is mentioned in chAndhOgya upanishath “sadhEva sOmya idham agra AsIth” (Oh child, this existed even before creation), emperumAn had both chith and achith (sentient and insentient entities) in subtle form, as his body, even before creation, when the world had been destroyed and they were waiting for their time. We can also construe this as emperumAn who was present even at the time of deluge, preparing for creation.

Uzhi peyarththAn – it can also be taken that it was emperumAn who created everything indicated by time.

We shall take up the 96th pAsuram next.