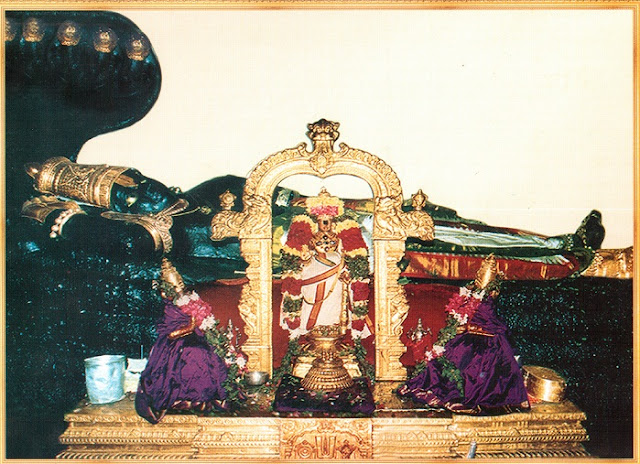 AzhwAr says that emperumAn gives himself only to those who he blesses and takes under him and not to others.

(for the others)
thAm – on their own
thiRambA sedi naragai nIkki – trying to sever themselves from the terrible hell called samsAram (materialistic realm) which is like an unseverable bush
selvadhan mun – before they could go
vAnOr – nithyasUris (permanent dwellers of SrIvaikuNtam)
kadi – having well fortified
nagaram – the city of SrIvaikuNtam
vAsal kadhavu – the entrance door
thiRambiRRu – will close
ini ArindhEn – I know now.

thiRambiRRu – for those who thought that they would get on their own efforts, it did not fructify.

thennarangaththu endhai – kaNNabirAn (krishNa) told arjuna in SrI bhagavath gIthA 18-66 “mAm Ekam SaraNam vraja” (hold on to me as the means). He said “leaving aside various means which are insentient, hold on to me who is paramachEthana (supremely sentient) and who is trying to attain you”. Those words were spoken to one arjuna at one point of time. periya perumAL (SrIranganAtha, who is dwelling in the SrIrangam temple), tells at all times “mAm Ekam SaraNam vraja” The word mAm refers to the simplicity of emperumAn. The simplicity found in periya perumAL is far greater than that found in krishNa. periya perumAL’s simplicity will make the simplicity of krishNa to run for life. ANdAL has mercifully stated in nAchchiyAr thirumozhi 11-10 “semmaiyudaiya thiruvarangar” (SrIranganAthar who acts in unison through his thoughts, speech and actions) and in nAchchiyAr thirumozhi 11-3 “sengOludaiya thiruvarangachchelvanAr” (SrIranganAthar who rules both materialistic and spiritualistic realms with a spectre in his hand). Even to reach SrIvaikuNtam, he [emperumAn] has to decide first.

thiRambA vazhi – the means which will never fail. In other words, the way which was determined in SrI bhagavath gIthA 18-66 “mAm Ekam” (he is the only way). Unlike the other forms of emperumAn (para, vyUha and vibhava which are approachable only to nithya-mukthars (eternally free and liberated ones respectively), mukthaprAyars (those who are at par with liberated ones) and the fortunate ones), archAvatharam is easily accessible to everyone. It can also be construed as – attaining other dhEvathAs is the wrong path and attaining emperumAn is the way which will not fail.

thiRambAchchedi naragai – the hellish place (materialistic realm) which was made that way by people themselves, from which escaping is impossible.

thiRambA – the hell from which one cannot escape. The place which will remain despite experiencing it for a long time.

nIkkith thAm selvadhan mun – even for those who can escape this.

thAn selvadhan mun –  this chEthana (sentient entity) who is omniscient and omnipotent is unable to cross this simple hurdle! (in other words, is it possible for the chEthana who is ignorant and incapable, to cross this hurdle?) The opinion here is that the time that he had spent carrying out sinful activities has been without any beginning, hence he does not have enough time to cross this samsAram.

vAnOr kadi nagara vAsal kadhavu – the door to SrivikuNtam which is fortified by the presence of nithyasUris. kadi refers to protection. Hasn’t emperumAn himself said in varAha charama SlOkam “nayAmi paramAm gathim” (I will take you to a great status)! Instead of attaining him by not shunning him when he comes to help us, how sad it is that one loses the opportunity by attempting to attain him through one’s own efforts by destroying one’s own svarUpam (basic nature)!

kadi nagaram – kadi can also refer to fragrance, in which case the meaning will change to SrIvaikuNtam which is sweet.

We shall move on to the 89th pAsuram next.