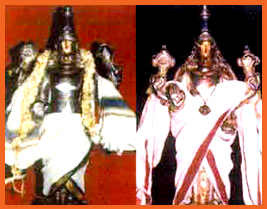 In the fifth pAsuram, parAnguSa nAyaki‘s friend says “Knowing her nature quite well, you [mothers] brought her to thiruththolaivillimangalam, showed her emperumAn‘s beauty and spoiled her”.

Subsequently,  parAnguSa nAyaki says “You showed her the decorated beauty of arvaindhalOchana in thiruththolaivillimangalam; from that day she is emotionally charged”.

See nanjIyar‘s introduction. Alternative explanation – after showing her the nature of the residents of thiruththolaivillimangalam, should you also show her what [emperumAn] sustains them?

kuzhaiyum – having natural tenderness
vAL – shining
mugaththu – having face
Ezhaiyai – her (who is having desire to deeply enjoy emperumAn)
tholaivillimangalam – in thiruththolaivillimangalam
koNdu pukku – brought her
izhai koL – with the decorations of divine ornaments
sOdhi – having radiance
sem – reddish
thAmarai – like lotus
kaN – one who is having eyes
pirAn – the benefactor who manifested such eyes to his devotees for their enjoyment
irundhamai – how we was present there
kAttinIr – you showed;
annaimIr – Oh mothers!
anRu thottu – from that day onwards
ivaL – parAnguSa nAyaki
mazhai peydhAl okkum – like rain
kaNNa nIrinodu – with tears from her eyes
maiyAndhu – being bewildered
nuzhaiyum – immersing in his beauty
sindhaiyaL – having the heart
a – where he resides
thisai – the direction
uRRu – well
nOkki – looking into
thozhum – perform anjali [joined palms].

You [mothers] brought parAnguSa nAyaki, who is having a shining face with natural tenderness, to thiruththolaivillimangalam and showed her emperumAn who is having reddish lotus like eyes and with the radiant decorations of divine ornaments and who is the benefactor who manifested such eyes to his devotees for their enjoyment, and showed her how he was present there in this manner; oh mothers! From that day onwards, parAnguSa nAyaki, with rain like tears from her eyes, having the heart which is bewildered and immersed in his beauty, is looking well into the direction where he resides and performs anjali.

When they ask “How does it matter now?”, she replies,

She is explaining the term “Ezhai” now.

She is explaining the term “kuzhaiyum” now.

AzhwAr says that once a person has subordinated himself to prakruthi (primordial matter; here it refers to samsAram, the materialistic realm), it is not possible to avoid narakam (hell) once the AthmA leaves the body. Hence he tells us to make an effort to worship emperumAn. He says, keep your head on the divine feet of emperumAn and your feet on the head of yama.

pinnAl – after the body falls down
aru naragam – the cruel hell
sErAmal – how to prevent from reaching there
pEdhuRuvIr – Oh people, who are bewildered!
pal nUl – in different types of SAsthras (sacred texts)
aLandhAnai – one who has been affirmed
kAr kadal sUzh gyAlaththai ellAm aLandhAn avan – emperumAn who measured all the earth which is surrounded by dark oceans
sEvadi – the fresh divine feet
munnAl – now itself
vaNanga – to worship
muyalmin – make an effort

pEdhuRuvIr – Oh people who are indulging in evil deeds,  ignorant of the impending sorrow, and now being bewildered out of repentance!

munnAl vaNanga muyalminO – you cannot postpone this any further. You have to do it immediately. First worship emperumAn and then carry on with any other work. Instead of giving excuses such as “We are children; we can do it later; we are young, what is the urgency now? we have become old, what is the use of doing it now?”, take a moment, decide, and even if it leads to a fracture of your limbs, go and fall at the feet of emperumAn. Just as vibhIshaNa hurriedly went, as mentioned in SrI rAmAyaNam yudhdha kANdam 17-1 “AjagAma muhUrthEna yathra rAmas sa lakshmaNa:” (he hurriedly reached the place where SrI rAma and lakshmaNa were together), go immediately and fall at the divine feet of emperumAn.

Is there any authentic source of information to reach him like this?

pannUl aLandhAnai – he is confirmed in many sacred texts as the supreme being. He is attempted to be known through the collection of words. Has it not been said in SrI bhagavath gIthA 15-15 “vEdhaiScha sarvairahamEva vEdhya:” (only I am known through all the vEdhas (sacred texts)) and in yajur AraNya 3-11 “sarvE vEdhA: yathraikam bhavanthi” (in whom all the vEdhas confluence together)!

gyAlaththai ellAm aLandhAn – There is no need to search for vEdhas to know that he is the lord of all the worlds. It can be known from the fact that he is ruling all these worlds.

aLandhAn – because you were asked to attempt [to fall at this feet], don’t wonder whether it should be done; do it. Since he did not shun anyone when he measured the worlds, not shunning [him] is what is required now also.

sEvadi – just as an infant seeks the bosom of its mother, go and worship his divine feet. Is it required to pay for mother’s milk? Drinking mother’s milk itself is the wage for the mother. Otherwise, will not the relationship between the mother and the infant become false?

pEdhuRuvIr – Is there any point in being fearful now, after carrying out all the sinful deeds?

We shall take up the 92nd pAsuram next.