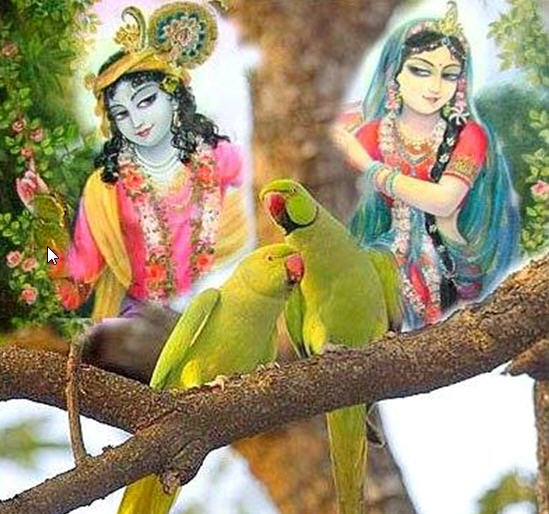 Subsequently, parAnguSa nAyaki says “You who have great support in the form of your entourage, do not engage in praising our speech for the sake of it, and praising our maina and parrot who speak sweetly”.

Fifth pAsuram. emperumAn said “Among friends, faults are considered as good qualities; when there is no friendship, even good qualities are seen as faults; good qualities and faults are dependent upon the person we are dealing with; hence, whatever I told you will appear as faulty for you all; still, we should accept what is highlighted by a mediator [neutral person]”.

nambI – (as said in “poy nambi” (complete in lies)) you who are complete (in lies)!
kazhaREl – don’t argue with me (saying “why are you calling me a liar?”);
thiN – firm (being a great support for falsely transforming day into night)
chakkaram – divine disc
nizhaRu – emitting radiance
thol padaiyAy – oh one who is having distinguished weapon!
un – your
kaithavam – mischievous acts
maNNum – (during the mahAbhAratha battle times) the princely people who gathered on earth
viNNum – dhEvas, the residents of higher worlds, without any distinction
nangu – clearly
aRiyum – know;

(hence)
unakku – for you
nAn – I
onRu – one thing
uNarththuvan – inform you, listen;

(don’t praise our words; we are not them [the other girls]);
nin – your
aruL – mercy
sUduvAr – born to behold
mazhaRu – very fresh
thEn – honey like
mozhiyArgaL – those with voice
manam – heart
vAdi – to wither
niRka – to stand
em – ours (instead of theirs)
kuzhaRu – (unlike them who speak clearly to you) speaking incohesively
pUvaiyodum – with maina
kiLiyOdum – and parrot
kuzhagEl – don’t play joyfully.

Oh you who are complete! Don’t argue with me; oh one who is having the firm, divine disc which is a distinguished weapon, emitting radiance! The princely people who gathered on earth and dhEvas, the residents of higher worlds, without any distinction, clearly know your mischievous acts; I have one thing to inform you, listen; while the hearts of those who are born to behold your mercy who are with very fresh honey like voice, are withering, don’t play joyfully with our maina and parrot which are speaking incohesively. Here maina and parrot indicate the dear Sishyas who are the dear companions of emperumAn’s devotees, having enjoyable attitude and are exclusively protected by them [the AchAryas].

emperumAn said – I cannot accept the words of those (you all) who have hatred in their heart; are there others who have witnessed my mischief?

emperumAn said “Would you cite those who are ignorant? Aren’t these people of the earth ignorant as said in thiruvAimozhi 4.8.6 “aRivinAl kuRaivillA agal gyAlaththavar” (the ignorant people of this world who don’t even know that they are ignorant)?

Hearing her words, emperumAn hung his head in shame thinking “we are having some witness [against us] in our own entourage”.

When he started praising them, she said “Who do you think are their owners? They are not the ones who you think to be!”.