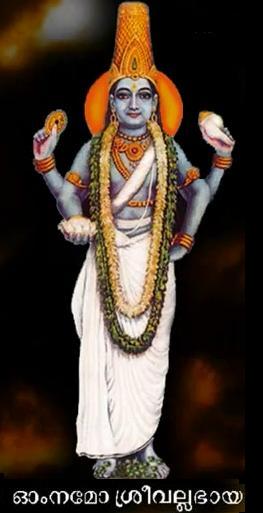 In the third pAsuram, parAnguSa nAyaki asks her friends “When will I see the divine feet of emperumAn who is mercifully standing in thiruvallavAzh?”.

Subsequently, parAnguSa nAyaki asks “Will I be able to eternally enjoy the divine feet of emperumAn who is doing the eternal favour of permanently residing in thiruvallavAzh where the chants of vEdham and vaidhika activities are conducted constantly?”.

Third pAsuram. parAnguSa nAyaki asks her friends “When will we get to enjoy him eternally?”.

sUdu – worn
malar – having flower
kuzhaleer – oh those who are having hair!
thuyarAttiyEnai – me who is suffering in separation
meliya – to weaken
pAdu – being sung
nal – noble (as said in “sAmavEdhOsmi“, similar to the divine form for sarvESvavan who is residing there)
vEdha oli – the sound of the sAma vEdham chanting
paravai – the ocean’s
thirai pOl – like the rising of the tides
muzhanga – tumultous
mAdu – in the close vicinity
uyarndhu – rising from the yAgam (sacrificial fire)
Omap pugai – the smoke from the hOmam (sacrificial altar)
kamazhum – spreading the fragrance of the sacrificial offerings
thaN – invigorating
thiruvallavAzh – in thiruvallavAzh
nIduRaiginRa – eternally residing
pirAn – great benefactor
kazhal – divine feet
nichchalum kANdum kol – will I be able to eternally enjoy?

Oh those who are having hair which is decorated with flowers! In thiruvallavAzh the tumultous sound of the noble sAma vEdham is heard like the sound of rising tides in the ocean and in the close vicinity, the smoke from the hOmam in the yAgam is spreading the fragrance of the sacrificial offerings, both of which are occurring to weaken me; will I be able to eternally enjoy the divine feet of the great benefactor who is eternally residing in such invigorating thiruvallavAzh?