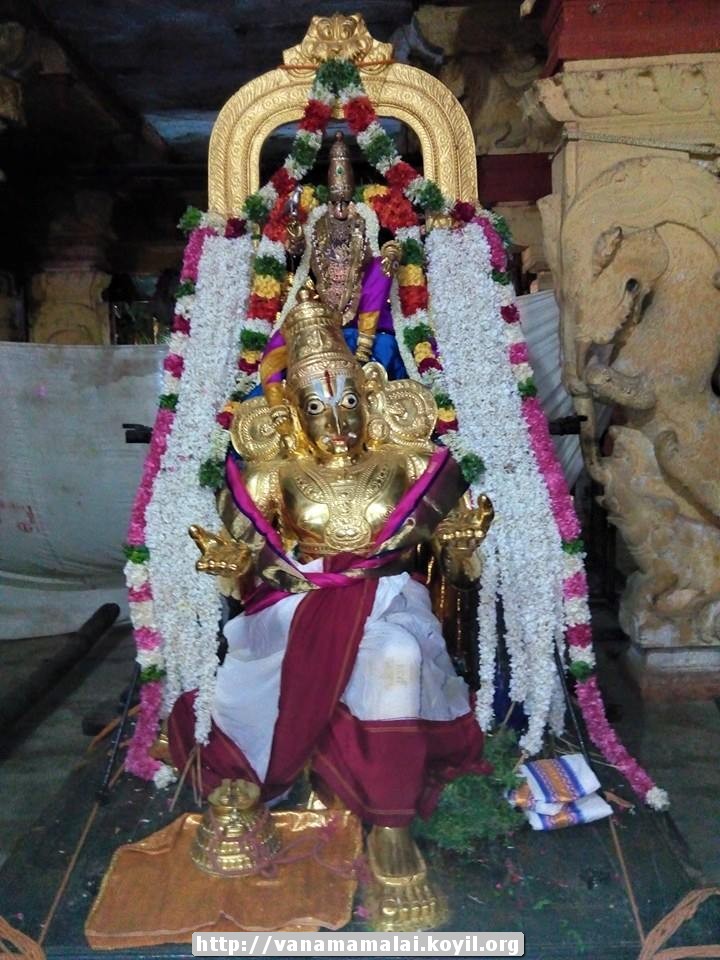 In the third pAsuram, emperumAn asks “What is the gain for me to accept you?”, and AzhwAr replies “I cannot see any gain for you who are complete in all manner, in accepting me who am very inferior; you did only out of your mercy. In the same manner, please fulfil my desires too”.

Subsequently, AzhwAr says “I have not done any favour in return for the your favour of accepting me and engaging me in service of you who have distinguished symbols which manifest your supremacy”.

Third pAsruam. emperumAn says “You said ‘show me mercy’; Alright, we will do; nothing to worry there; but as said in pUrva mImAmsA “SAsthrapalam prayOkthari” (When AthmA becomes karthA (doer), SAsthram is of use) and in brahma sUthram “karthA SAsthrArthavathvAth” (If SAsthram is of use, AthmA should be the doer), those who receive the mercy should also have something in them”, and AzhwAr replies “is this a rule only for what is to come? did I have anything previously [when you blessed me originally]? hence, give up the expectation of even a little bit from me and just do it out of your mercy”. AzhwAr says “Just as you have acknowledged me out of your causeless mercy to get me thus far, you have to mercifully do the rest as well”.

(with that beautiful form)
poruL – as an entity
allAdha – cannot be considered, as said in “asannEva” (non-existent)
ennai – me
poruL – to realize my nature
Akki – acknowledge

(in this manner, for the favours you have done previously)
oru – a
kaimmARu – gratitude, return of favour
aRiyEn – do not know that I have done.

emperumAn is having garuda bird as his flag, divine chakra as his weapon and paramapadham as his kingdom; he is having a dark cloud like form which he bestowed to me; with that form, he transformed me who cannot be considered as an entity as said in “asannEva” (like achith) to realize my nature; he acknowledged and accepted my vAchika kainkaryam; Oh you, who are residing in SrIvaramangala nagar where many who have mastered the four vEdhams, having great knowledge, are living and showed your mercy there; I do not know of any gratitude, return of your favour, which I have done.

The remainder of the sentence [which is to be assumed] is – this being the case, please show your mercy to fulfil the rest of the aspects too and to be recited along with previous pAsuram’s ending “thamiyEnukku aruLAy” (bless me who is lonely). “karuLap puL” also means dark-nosed garuda. “theruL koL nAnmaRai” – “theruL koL” (having clarity) can be seen as an adjective to vEdham itself.

When asked “What is the favour done by emperumAn?”, AzhwAr says,