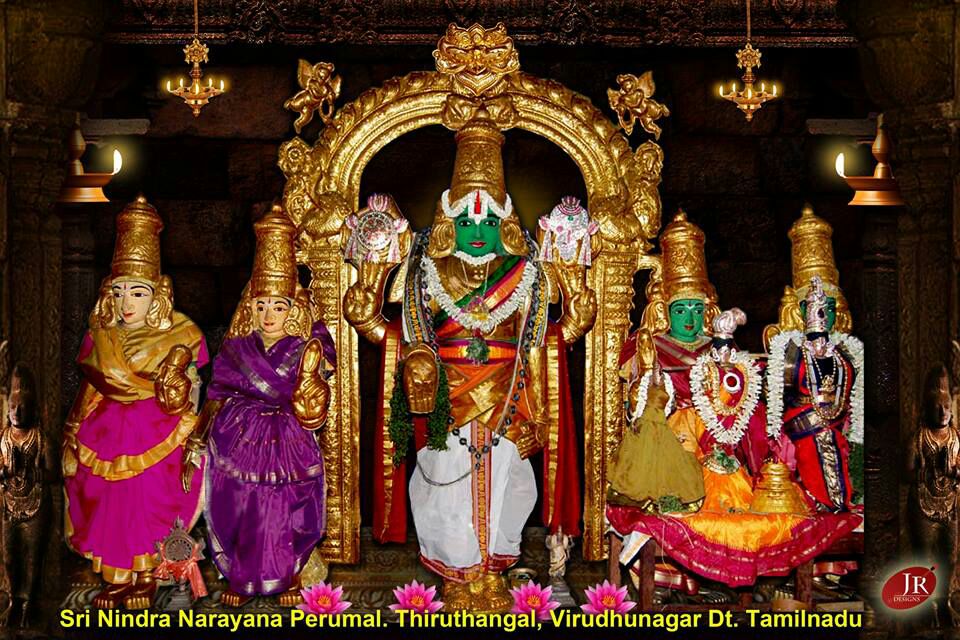 The proper sequence of enjoying emperumAn is to enjoy his svarUpam (true nature), rUpam (form) and guNam (qualities); however AzhwAr leaves aside the svarUpam and instructs us to enjoy His rUpam directly;and the reason for this is – his attachment towards the same. When AzhwAr started experiencing emperumAn’s rUpam, that itself blocks him from enjoying it directly like an ocean pushing its waves on those who want to enjoy it; so, just as someone desiring to step in to a flood will use a boat to do so, AzhwAr too sets to enjoy emperumAn through an example. Since bhagavAn is distinctly unique, there is no exact match for bhagavath vishayam; but at least one should compare an object which has some minor similarity; [hence] AzhwAr is highlighting an emerald mountain as example. Since the emerald mountain lacks the exact qualities of emperumAn, AzhwAr starts with decorating it [to make it look more comparable to emperumAn]. Just as he left aside svarUpam and started engaging in the rUpam, here, he leaves aside the rUpam and starts engaging in the object which is cited as example and decorating it.

sekkar mA mugil uduththu – Like those who saw an elephant would chant incessantly “elephant, elephant”, AzhwAr praises emperumAn being unable to control the love out of enjoyment. The garment which is (sekkar) red in colour which is a contrasting colour to his blackish complexion; (mA) the garment is having vastness to have folds and fleets; (mugil) the garment is cool like a cloud, matching his tender body; adorning such garment as if it naturally grew out of his waist [such perfect fit].

mikka sem sudarp paridhi sUdi – As said in SrI bhagavath gIthA 11.12 “dhivi sUrya sahasrasya bhavEdhyugapadhuththithA | yadhi bhA: sadhruSI sA syAdh bhAsas thasya mahAthmana: ||” (If the splendour of a thousand suns were to blaze out at once (simultaneously) in the sky,that would be the effulgence of the mighty lord) – it is said that the sun has 1000 rays, but for the crown of this emerald mountain (emperumAn) appears to be having many thousands of rays; [the emerald mountain] wearing the sun which is having reddish rays.

am sudar madhiyam pUNdu – The emerald mountain is wearing the moon which possess cool rays and is unlike the sun which does not allow anyone to approach it because of its fiery nature; further it is unlike the worldly moon which goes through waxing and waning and having taints, and having beauty to be viewed forever without taking one’s eyes off.

thigazh pasum sOdhi maragadhak kunRam kadalOn kaimisaik kaN vaLarvadhu pOl – The emerald mountain which appears to be lofty with its shining green color which leaves everything else inferior, appears to be sleeping on the hands (waves) of the ocean king (varuNan). Though AzhwAr is talking about the emerald mountain, the example for emperumAn, he is saying “kaN vaLarvadhu pOl” (like divinely resting) instead of saying “like sleeping”, as he feels that it will only cause insult to emperumAn’s greatness. thirumalai nambi when identifying a person to emperumAnAr, says “do you know the person who cannot wear on his ears, even if he were given golden ear-rings?”, instead of saying the “person with delicate ears”.

mudi – This (crown) is what is explained by “sem sudar paridhi sUdi“.

pUN – This (necklace) is what is explained by “am sudar madhiyam pUndu“.

mEthagu – These ornaments are said to be matching for his svarUpam (true nature); or it can be said to be perfectly suited to His thirumEni (divine form). He is wearing many worthy ornaments like necklace etc as explained previously. Even if emperumAn’s wealth can be measured, His divine ornaments cannot be measured at all. As bhAshyakArar explains “nUpurAdhyaparimitha dhivya bhUshaNa” in his SaraNAgadhi gadhyam listing the ornaments such kirIta, makuta, chUdA, avathamsa, makara kuNdala, graivEyaka, hAra, kEyUra, kataka, SrIvathsa, kausthuba, mukthAdhAma, udhara bhandhana, pIthAmbara, kAnchIguNa, nUpur and then ends with “Adhi” (starting with), here too AzhwAr enlists many ornaments and say “palkalan“.

sOdhi vAyavum kaNNavum sivappa – While in the example, only a single entity “red coral like lips” is shown, why is the mouth and eyes are highlighted here? It is for this reason only, there it was explained as “(many) reddish spots on the mountain”.

pachchai mEni mIdhittu migap pagaippa – The divine ornaments and the emperumAn‘s thirumEni which possess all of those ornaments, compete with each other; his thirumEni wins the competition and shine with blackish complexion.

kavarthalai – thiruvanandhAzhwAn having several hoods; also said as his acquiring many hoods as a result of coming in contact with emperumAn. Like a mother who keeps child in her lap, here thiruvanandhAzhwAn (AdhiSEshan) keeps periya perumAL on his lap and shows motherly love to Him. When ananthAzhwAn (disciple of emperumAnAr) went to thirukkOshtiyUr and he held bhattar (who is the revered son of kUraththAzhwAn) on his lap and manifested motherly affection towards bhattar. ANdAL, the consort of kUraththAlwAn had a child first but he died at a very young age. When bhattar was born to them, emperumAnAr thinks that “we should not let this child suffer the same fate and he should live long” and so he performs thirumanjanam (sacred bathing) to periya pirAtti and feed that holy water to him and offers him in adoption to periya pirAtti and periya perumAL. And because of this ananthAzhwAn would call bhattar as “periya pirattiyAr’s son”.

aravin amaLi ERi – Climbing on the cozy bed of thiruvanandhAzhwAn which has nice fragrance, coolness and softness. Here amaLi refers the bed.

Eri – Since emperumAn considers climbing on thiruvanandhAzhwAn as his own gain/pleasure, he climbs on him with great desire, as nampermAL (uthsava deity in SrIrangam) would climb the six legged palanquin with great desire.

eRi kadal naduvuL – in the [milky] ocean which is throwing up the waves, being [favourably/happily] agitated by the presence of emperumAn.

aRi thuyil amarndhu – Being engaged in sleep which is an embodiment of wisdom; for the others, there will be darkness in their heart when they close their eyes; they will enjoy by worldly aspects through their senses such as eyes etc. But if their eyes are closed both the inner mind and their external vision becomes dark for them. Here when emperumAn reclines on thiruvanandhAzhwAn closing his divine eyes, it implies that he is contemplating about protecting the world and meditating upon himself since there is none higher to him.

When asked “And what will emperumAn do when these dhEvathAs worship Him?”, AzhwAr says

kidandha – When a flock of cranes enter the sea (to catch fish) and produce cheerful noise, it will not affect the sea; similarly even if the dhEvathAs like Siva etc. and the hordes of gods worship him (who is distinctly unique) in his lying down posture, due to his greatness, he remains undisturbed. AzhwAr too considers both of these aspects [emperumAn‘s tranquil sleep and the dhEvathAs worshipping him] as natural actions [without giving any specific importance].

thAmarai undhi – He who has the divine lotus navel which is the cause for the entire creation;

When asked “Is there any one like him?”, AzhwAr says

thanipperu nAyaga – There is no one who is superior to emperumAn. If there is no one superior than Him (above Him), is there any one who is equivalent to Him? No, he is distinctly unique; Though other dhEvathAs are referred as supreme in the scriptures, it is only done as a courteous act. It is said in mahAbhAratham “rudhram samASrithA dhEvA rudhrO brahmANamAsritha: | brahmA mAmASrithO rAjan nAham kanchithupASritha:||” (dhEvathAs are surrendered to rudhra; rudhra is surrendered to his father, brahmA; brahmA is surrendered to me; but, Oh king! I am not surrendered to any one) – all these dhEvathAs expect something from others. Unlike everyone who is controlled of him, he is the distinct supreme lord who has none to control him; it is explaining that he is all the three causes [for creation]  viz nimiththa kAraNam (efficient cause), upAdhAna kAraNam (material cause) and sahakAri kAraNam (instrumental/ancillary cause).

mUvulagaLantha – For those people who cannot come to him and enjoy emperumAn, He himself goes to wherever they reside [and graces them by touching them with His holy feet].

sEvadiyOyE – The sweetness of his divine feet is such that, we cannot leave him, even if he is so cruel that he does not help us.

Let us enjoy the 2nd pAsuram next.