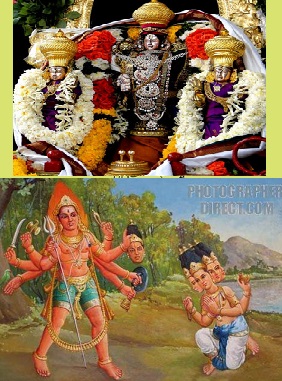 AzhwAr says in this pAsuram that emperumAn not only does good to these people [brahmA et al] by being in the forefront, but when they leave him of their own accord and indulge in deeds which are harmful to them, he removes their faults and protects them. In the earlier pAsuram brahmA’s ignorance was mentioned. In this pAsuram, Siva’s ignorance is highlighted.

paN purindha nAn maRaiyOn – brahmA, who was taught the four vEdhas, along with their [musical] tunes
senni – on the head
pali yERRa – one who took alms
veN puri nUl mArban – rudhra who has white coloured yagyOpavIdham (sacred thread) worn across the chest
vinai thIra – to remove the brahmahaththi curse (due to harming a brAhmaNa; in this case brahmA)
puN purindha AgaththAn – emperumAn who harmed his divine heart
thAL – divine feet
paNivAr kaNdIr – see those who worship
amarar tham bhOgaththAl – along with enjoyment of nithyasUris
bhUmi ALwAr – will rule this earth too

paN purindha nAn maRaiyOn sennip pali yERRa – Siva had severed one of the heads of brahmA, who had learnt the vEdhas with all the intonations. He severed the head of the one who was not only his father, but father of all the people in the world. Siva himself says in mAthsya purANam 1-8-2 “vAmAngushta nakAgrENa chinnam thasya SirO mayA” (that brahmA’s head was severed by the edge of the nail on my left hand). brahmA who was angered by this cursed him saying “kapAlee thvam bhavishyasi” (you will be with the skull) due to which the skull got stuck well with Siva’s hand. Since brahmA had cursed him saying that he has to beg till the skull becomes full, Siva went on begging for a very long period with that skull to rid himself of the curse.

veN puri nUl mArban vinai thIra – In order to atone for his bad deed, Siva wore a white coloured sacred thread and stood in front of emperumAn with the skull. Just as those who go about life as they like, indulging in sinful deeds, start taking dip in holy rivers and oceans once the effects of the sins become severe and trouble them, Siva also came in front of emperumAn with lot of humility. It is not only Siva who had severed his father’s head. pArvathi, his consort, was also responsible for the death of her father dhaksha. Siva’s follower saNdESvaran had also severed the foot of his father (all these persons are disrespectful of their fathers). It is opined here that since the word “vinai thIra” has been used it is clear that Siva is subordinated to the results of bad deeds and he is incapable of removing the effects of his sins. Thus there is no doubt that he is not ISvaran (supreme lord).

puN purindha AgaththAn – After seeing Siva, who thinks highly of himself, going around with the skull begging for alms, emperumAn’s divine mind was hurt. Alternatively we can consider the meaning of puN purindha AgaththAn as “alangal mArvil vAsanIr koduththavan” spoken mercifully by thirumazhisai AzhwAr in thiruchchandha viruththam 113, which means that emperumAn made an incision on his chest and took out fragrant blood to fill the skull in Siva’s hand. brahmA suffered by having his head severed. Siva severed a head and became a sinner. emperumAn removed the pain of both.

Those who attain such emperumAn’s divine feet ……

Let us take up the 47th pAsuram next.