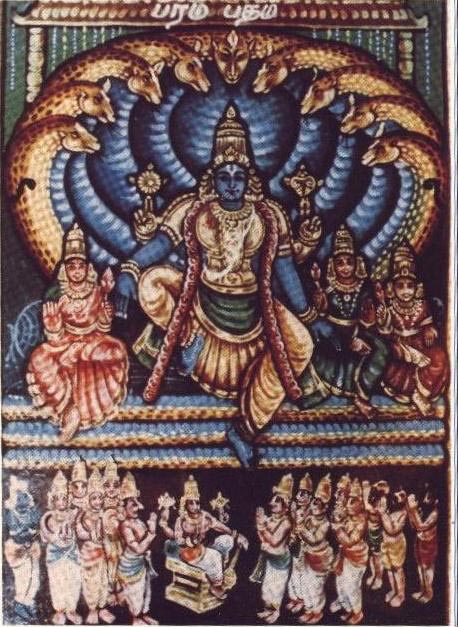 AzhwAr says that even if one does not have any connection with the means prescribed in SAsthras (sacred texts) such as karma yOgam, gyAna yOgam and bhakthi yOgam (being involved in carrying out deeds, having knowledge of the deeds carried out and having total devotion to  respectively), if one has the knowledge “emperumAn is the Lord and I am the servitor” he would attain the high place of paramapadham (SrIvaikuNtam) mentioned in the sacred texts. Alternatively, one could construe that AzhwAr is wondering whether those who do not follow the means prescribed in the SAsthras can attain him.

Let us enjoy the pAsuram and its meanings.

imaiyAdha kaNNAl – with the inner eye [heart] which does not have any contraction of knowledge
iruL agala – the darkness (of ignorance) to leave
nOkki – seeing the svarUpam (basic nature) of self as well as of emperumAn
amaiyA – uncontrollable
poRi pulangaL aindhum – the five sensory organs such as eyes etc and the five matters such as sound, taste etc [connected to the five sensory organs]
namaiyAmal – even if not controlled
Agaththu aNaippAr – those who think of emperumAn [when he, of his own volition, comes with causeless mercy]
Ayira vay nAgaththu aNaiyAn – emperumAn who is lying on the mattress of AdhiSEshan with thousand hoods
nagar – his dwelling place SrIvaikuNtam
aNaivarE – will attain

iamiyAdha kaNNAl – here, the word kaN [eye] refers to the mind. Mind is the eye which does not blink [unlike the external eye]. One should refer to the external eye when one is talking of removing the darkness outside. When one is referring to removing ignorance, one should talk about the inner eye or mind. SrI vishNu dharmam 275-2 says “manasA thu viSudhdhEna”(he could be seen only with the pure mind). nammAzhwAr, in periya thiruvandhAdhi 28 says “katkaNNAl kANAdha avvuruvai nenjennum utkaNNEl kANum uNarndhu” (emperumAn cannot be seen with the external eyes but only with the internal eye).

iruL agala nOkki – thinking in such a way that avidhyA (ignorance) etc would leave. Knowing self and emperumAn (true nature) after the darkness of ignorance is removed.

namaiyAmal – without control. In other words, the sensory organs such as ears etc reaching their targets.

Agaththu aNaippAr aNaivarE – even if they are not able to control their sensory organs, having the knowledge that they are subservient to emperumAn. Those who keep him in their hearts will reach paramapadham (SrIvaikuNtam). Alternatively, if one considers the word aNaivarE as conveying the meaning – will such people reach emperumAn? – the meaning will change as: can those who keep emperumAn in their hearts but are unable to control their sensory organs,  reach paramapadham [the answer is that they cannot]. In the first case, all that is required is not to shun emperumAn when he himself comes and showers his grace [on the jIvAthmA].

AyiravAy nAgaththu aNaiyAn nagar – it is said that the entity attained by mukthAthmA (liberated from material realm) is emperumAn who is lying on the 1000 hooded ananthAzhvAn (AdhiSEshan). This same has been mentioned in paryankavidhyai also. The service rendered by one ananthAzhvAn is the sum total of all the services by all the others in SrIvaikuNtam.

nagar – as nammAzhwAr mentioned in thiruvAimozhi 2.8.4 “nalamantham illadhOr nAdu” (it is a unique place where there is no end to kainkaryam ). Instead of calling it as a nAdu (country) AzhwAr is referring to it as nagar (city). It is to emphasise that it is common to all to attain the country paramapadham.

We shall move on to the 33rd pAsuram.