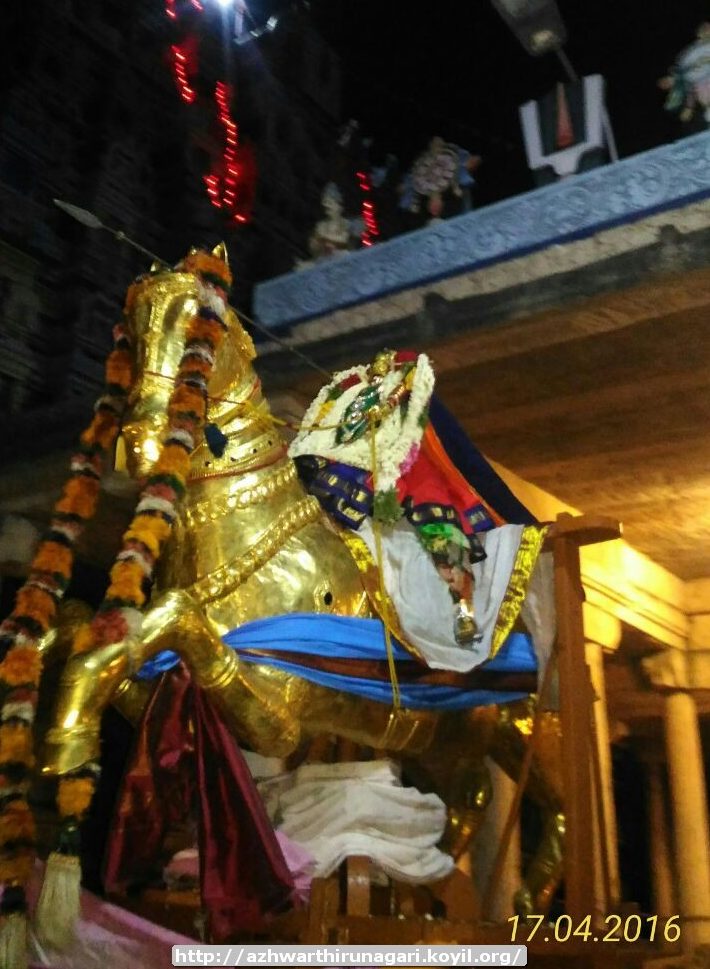 In sixth pAsuram, AzhwAr was asked “If emperumAn is the supreme lord, why did he make us to be devoted towards dhEvathAntharams (other dhEvathAs)?” and he replies “This is done to not let the injunctions of SAsthram which indicates ‘all the creatures who are engaged in good/bad deeds to reap the results according to their deeds’, fail; knowing this, you all escape his deception”.

Subsequently, AzhwAr says “It is emperumAn’s skill which makes you not realize how he manages the material realm based on one’s karma (deeds)”.

Sixth pAsuram. When asked “We have good clarity about bhagavAn’s supremacy when you mercifully explain the same and at other times we have great desire towards other dhEvathAs; what is the reason for this?”, AzhwAr replies “that is due to your own sins”. Also, see nanjIyar‘s introduction.

maRRu Or – another
dheyvam – dhEvathA
pORRi – praise
pENa – to serve/support
puRaththittu – keeping away (from him)
ummai – you all (who are attached to those dhEvathAs)
innE – in this manner (like I am faithful towards emperumAn, you are faithful towards those dhEvathAs)
thERRi vaiththadhu – made you remain faithful (in those dhEvathAs)
elleerum – everyone
vIdu peRRAl – if attained mOksham (liberation) of serving bhagavAn
ulagu – the injunctions/order of the world (where it is said that “emperumAn will conduct the world based on the individual’s karma giving them the apt results)
illai – will be lost
enRE – will remain like that;

(the reason for this)
sERRil – in marshes
sennel – fresh paddy
kamalam – lotus
Ongu – grow nicely
thirukkurugUr adhanuL – residing in AzhwArthirunagari
ARRavallavan – the one being greatly capable and making others enjoy the results of their deeds, his
mAyam kaNdIr – being related to prakruthi (material realm) which is said as “mAyA” (which is part of his sport and is difficult to cross over);
adhu – that
aRindhu aRindhu – having knowledge about it (the process of prapaththi (surrender) which helps cross over the material realm)
Odumin – try to cross over (that material realm)

The reason for keeping you all away from him to praise and serve another dhEvathA in this manner and made you remain faithful towards them is, if everyone attained mOksham (liberation) of serving bhagavAn, the injunctions/order of the world will be lost. The reason for this is – emperumAn who is residing in AzhwArthirunagari where fresh paddy and lotus flowers grow nicely in marshes, who is greatly capable and making others enjoy the results of their deeds – such emperumAn’s relation with prakruthi (material realm) which is said as “mAyA” ; having knowledge about it, try to cross over the material realm.