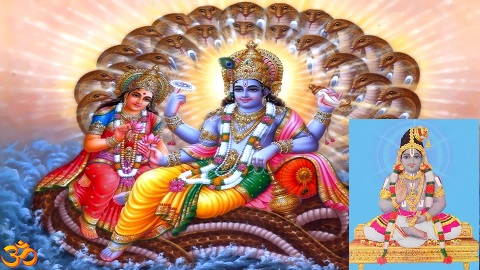 In ninth decad – AzhwAr, even after showing detachment towards AthmA and its belongings which are not liked by emperumAn, does not get the experience of bhagavAn; as a result, he becomes very anguished, and observes that the residents of this material realm do not qualify to accompany him and are more anguished and hence highlights the following aspects:

Meditating upon these aspects, AzhwAr says “You who are with such qualities, instead of keeping me in this samsAram which is the abode of great pain and anguish, should accept me at your divine feet”; emperumAn fulfilling his desire, manifests his divine form as seen in paramapadham, as said in “SrIyAsArdham jagathpathi:“; seeing that with his internal vision, AzhwAr explains his divine feet as the ultimate goal after explaining the lowly nature of aiSvarya (worldly pleasure) and kaivalyam (self-enjoyment).

[Three explanations connecting this decad to the previous one are given].

AzhwAr rejected everything saying “I don’t want my body; don’t want my self”; but they did not leave him just by hearing his words; so, he says “even to remove something, your grace is needed, just as your grace is needed to get something, your token of acceptance is required and kindly bestow that”. His hatred for samsAram was so much that he ended up requesting this inauspicious aspect [death] in the divine presence of emperumAn.

From this, we can understand that, when a person is fixated on enmity towards bhagavAn, one should avoid any association with such person.

kUraththAzhwAn explains – AzhwAr, after suffering in “ERALum iRaiyOnum” (previous decad), looked around to see if he will find a companion to share his grief and searched in the worldly people; but they were attached to worldly pleasures just as AzhwAr was attached to bhagavAn, and were joyful/sorrowful based on the acquiring/non-acquiring of such pleasures; as said in “vALERu kANath thELERu mAyndhu” [when a person crying out in pain due to being bitten by a scorpion, sees another person whose hands are cut-off by sword, the first person will forget his pain and start worrying for the other person], AzhwAr forgot his own suffering [seeing the plight of worldly people]; he only thought about the suffering of those people; he looked at sarvESvaran; sarvESvaran remained omniscient, omnipotent, very magnanimous, having vowed to protect all, being tolerant of all mistakes committed by others, and being the controller of everything; AzhwAr wondered “this being his nature, is this world suffering due to being a lordless land?” and prayed to emperumAn holding his divine feet “while you remain the lord of all, very merciful, apt lord and are able to know and eradicate their sufferings, can they suffer like this here? please help them”; emperumAn consoles AzhwAr saying “what can I do? since they are chEthanas (sentient beings, who have knowledge), they should have the desire; whatever I bestow should be purushArtham (desired goal); purushArtham is that which is bestowed based on the request of an individual);  they are unlike achith (matter) which can be used as we desire; even after my facilitation for them to develop attachment towards me, they have disregarded those options and hence I cannot do anything; you forget about them”; AzhwAr says “I can be convinced by your reply only if you say that ‘they have independently chosen their paths’ [this is highlighted based on 7th pAsuram in this decad, where AzhwAr says everything is controlled by emperumAn only]”; emperumAn replies “since they are chEthanas, I have given them in a scale, both myself and worldly pleasures and told them ‘choose whichever you prefer’, as the side of the scale which has the worldly pleasures is lowered [two meanings – lowly, best (in the minds of worldly people)], they chose worldly pleasures; I have tried my best and have given up on them; now, I cannot do anything more; so you too forget about this”; AzhwAr says “if that is the case, you have to first pull me out of these people whose gains/losses are outside you”; emperumAn replies “I have already done that for you; as I have made you incompatible to exist amidst worldly people, this is your state of being relieved from the anguish acquired from worldly experience” and manifests his form in paramapadham where the nithyasUris are serving him along with periya pirAttiyAr in the most distinguished manner; emperumAn says “if your heart is fully attached to that paramapadham, what is the great worry in attaining that goal? what shall I do now?”; AzhwAr considers both these aspects [his own incompatibility in this world and emperumAn‘s divine presence with SrI mahAlakshmi in paramapadham], sustains himself and concludes the decad with gratitude. Once, AzhwAn was travelling, he heard the cry of a frog which was caught by a snake, AzhwAn fainted thinking “who is it calling for it’s rescue”; this explanation matches AzhwAn’s [most compassionate] nature.

One thought on “thiruvAimozhi – 4.9 – naNNAdhAr”