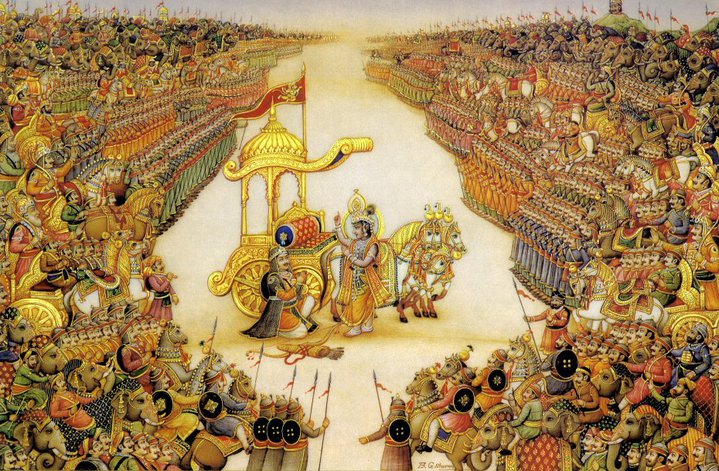 In sixth pAsuram, parAnkuSa nAyaki says “emperumAn, after mercifully explaining the different means to attain him [as gIthAchArya], reformed/captivated those who were unable to be reformed by good advice, by showing his divine beauty as SrI vAmana; there is no use of my overall beauty which is not desired by such emperumAn”.

Subsequently, parAnkuSa nAyaki says “There is no use of my radiance when not desired by sarvagya (omniscient lord) who makes one exist for himself exclusively by giving advice and seeking out”.

Sixth pAsuram. parAnkuSa nAyaki says “What is the use of my beauty which is not desired by emperumAn who gives knowledge through instructions to those who are ignorant and who enslaves those who are unqualified to acquire knowledge by manifesting his overall physical beauty?”.

(amidst the armies of the whole world)
neRiyellAm – all means (starting from karma yOga upto prapaththi (surrender))
eduththu uraiththa – (himself) mercifully explained (to be clear)
niRai gyAnaththu – one who is complete in knowledge
oru mUrththi – one who is having unmatched nature
kuRiya – Like bringing the whole mEru mountain into a small stone, being very attractive in vAmana (dwarf) form
mAN uruvAgi – having brahmachAri (celibate) form (which is identified by accepting alms)
kodum kOLAl – deceiving in a wicked manner (by showing his physical beauty and captivating mahAbali’s attention, by showing the small feet and convincing mahAbali)
nilam koNda – one who made the earth to be his own
kiRi – having good abilities
ammAn – sarvESvara (supreme lord)
kavarAdha – not liked
kiLar oLiyAl – glowing radiance
kuRaivilam – what is the use?

emperumAn [gIthAchAryan] who is complete in knowledge and who is having unmatched nature, mercifully explained all the means to be known by those who are in this vast earth which has no limitation. What is the use of my glowing radiance which is not liked by sarvESvaran who is having good abilities and who is being very attractive in a vAmana (dwarf) form which is like bringing the [beauty of the] whole mEru mountain into a small stone, and having a brahmachAri (celibate) form, deceiving [mahAbali] in a wicked manner?