When asked – Your highness said ‘maRai nAlum vaLarththanan’, that what emperumAnAr divined to the sentient is based on vEdhAntham as way for liberation as means in the form of devotion, and,  prapaththi.  Between these, is your dedication focused towards the easy to do prapaththi (surrendering)?

amudhanAr divines that it is not that either, and that he is devoted to the love (of emperumAnAr’s devotees).

In the previous pAsuram – Compared to the lord of all, who is neutral to punishment and kindness, that is, the sarvESvaran who is a punisher, it is emperumAnAr who removes ignorance, and who came down from SrIvaikuNtam with a vow to protect the sentient, is of causeless mercy, so, for saving the sentient he nurtured vEdha vEdhAnthams

– hearing amudhanAr divining so, some people nearby who heard this, ask – in those vEdhAnthams, are you devoted to the path of SaraNAgathi that is talked about for those wishing mOksham, as said in mumukshurvai SaraNam aham prapadhyE” (I am surrendering unto that brahmam)?

amudhanAr replies – due to the dangerous karmas that are hindrance to performing SaraNAgathi, I am not having complete faith in SaraNAgathi, and for me who is not helpful and who is involved in the experience of happiness and sadness till the end of this body that is of bad smell, flesh, etc., I am having faith that the helpers in my journey and protectors of me are those noble souls who are easier than emperumAnAr, the ultimate means, and are my lords, and who consider only my lord emperumAnAr as all kind of their relationships as said in ‘thandhai nal thAy thAram [Arththi prabandham – 3]’ ((Oh emperumAnAr!) good father, mother, spouse, (children, wealth is all you for me)), and are in the state of  ‘thEvu maRRaRiyEn [kaNNinuN chiruth thAmbu – 2]’ (~ do not know any other god); so my dedication is in the path of love towards such devotees of emperumAnAr.

vaLarum piNi koNda – Being of boundless sorrow
val vinaiyAl – due to dangerous karmas that cannot be gotten rid of by experiencing its effects or by amends,
kidaiththu aRiyAdhu – not getting directly (in a straight forward manner)
kiLarum thuNivu –  utmost faith
mikka nal vinaiyil – in the highest dharma, that is SaraNAgathi;
mudaiththalai – being of bad smell
Un – and in form of flesh, etc., – such body;
as said in ‘thaLarA udalam [thiruvAimozhi – 5.8.8]’ (~body that becomes weak), till the time of last breath,
thaLarum aLavum – till the time of getting weak
as said in ‘van sERRu aLLal poyn nilam [thiruviruththam – 100]’ (world of falsities, that is a dense sludge), ‘podhumbinil veezhndhu vazhukki [periyAzhvAr thirumozhi – 5.2.7]’ (falling into pit), ‘kUdi azhungik kuzhiyil veezhndhu vazhukkAdhE [periyAzhvAr thirumozhi – 4.6.6]’ (not get slipped and get immersed into the pit (of worldly affairs / pull of senses)), in the place of worldly affairs that is of recovering from using the holding stick that is about what are to be followed and what are to rejected, that is given due to  help of pious ones,  (but later again) falling down, and repeat this,
thariththum – managing to stay afloat
vizhundhum –  and falling into the cruel pit of senses like sound, form, etc.,
thani thirivERku – to me who was flailing without having any one with me as an accompaniment to end my loneliness, and preventing me from falling into pit holding me and guiding me to save me,
em – for us
iRaivan – lord
irAmAnusan thannai – emperumAnAr
those being ‘thEvu maRRaRiyEn [kaNNinuN chiruth thAmbu – 2]’ (~ do not know any other god),
uRRavar uLar – they are there who are dedicated to (emperumAnAr).

Their love towards me only is my life savior, is the thought. 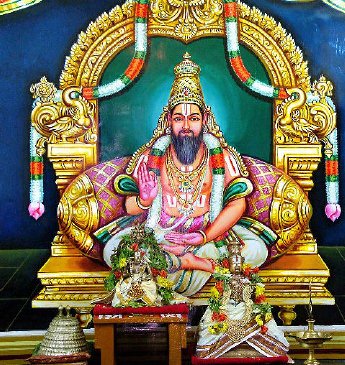 the one growing more and more, is the sickness – that is disease – and sadness from it.

koNda val vinaiyAl – that which creates such sadness all the time, due to the bad karmas which cannot be rid of by experiencing its effects or by amends;

being the supreme among all the means, unlike other means which are detrimental to true nature (of AthmA), having the goodness of being amicable to true nature, the action in the form of anjali (venerate) (that is, SaraNAgathi), as said in,

what is said as great faith that is related to and goes up to the level of para bhakthi, para gyAnam, and, parama bhakthi – no such faith is attained, being absent in such knowledge;

Some also recite as ‘mikka nal vinaiyin kiLarum thuNivu’ – then, great faith that is required for the very high dharma of SaraNAgathi.

being the place of bad smell by nature, the body that is in the form of flesh, etc., urine, muscles, etc.;

till the time such body becomes weak;

in the place that is this material world, having ups and downs,

some noble ones who are present here by His grace, as I was immersed in the affinity towards this material world, helped me to be lifted up,

and holding to the pole they gave, that is ability to discern between what should be followed and what should be rejected, and due to that getting temporary peace of removal of sorrows, and recovering from it;

and then due to carelessness/inadvertence, falling (again) into the cruel and hard pit that is interest in worldly matters like sound, taste, etc., (SabdhAdhi),

‘nORRa nOnbilEn nuN aRivilEn [thiruvAmozhi – 5.7.1]’ (~ Did not undertake any penance, not having knowledge gained), and,

‘na dharma nishtOsmi’ (~am not following dharmas properly), and,

‘bhavadhurdhinE padha skalitham’ (~without knowing the direction to go in, Oh emperumAn! I have lost the way),

for me who does not have any accompaniment whether in the form of sentient or non-sentient,

irAmAnusan thannai uRRavar – As they said in ‘rAmAnujasya charaNau SaraNam prapadhyE’ (surrendered to only the divine feet of emperumAnAr), and, ‘rAmAnujArya vaSaka: parivarththisheeya [sundhara bAhu sthavam?]’ (we want to be under the shadow of divine feet of emperumAnAr?), and, ‘nachEth rAmAnujEth yEshA (Oh! If there was no ‘rAmAnujA’ the most prudent four lettered manthra (what (terrible) state would worms like me would have ended up in!)), etc., those who are having dedication towards emperumAnAr;

em iRaivar uLar – being a companion to remove our loneliness, preventing us from falling into the deep pit that is the worldly existence, they themselves hold me and direct me to lift me up – they are my lords;

it is adjective to emperumAnAr when read as ‘em iRavar-irAmAnusan’.

When some recite as ‘em iRaiyavan – irAmAnusan thannai uRRavarE’ – the meaning is to be taken as – those who stay dedicated to emperumAnAr and not know anything else, are my lords;

kiLarum thuNivu –  Since prapaththi is praying as ‘you please be the means and protect me’, it requires high level of faith; since I don’t have that, how would I get the path of prapaththi , asks amudhanAr.

Un thaLarum aLavum ..vizhundhum – By this, he shows that even if the body (of meat, etc.) may become weak,  interest in other matters is not becoming weak, and it pushes us into the pit – thus showing the strength of interest in such matters.

It is the love of those dedicated to emperumAnAr, as ‘thEvu maRRu aRiyEn’, who are my associations, that would prevent us from falling into the pit that is worldly existence and can protect us – is the meaning of this pAsuram.