In the previous pAsuram – He talked about how his mind that is like ‘aru vinaiyEn van nenju’, had involved in the enjoyability of emperumAnAr, and he thought about how in many places in pAsurams previous to this he had talked about the purifying quality like in ‘theedhil irAmAnusan [rAmAnusa nURRanthAdhi – 42]’, ‘thUyavan’ [rAmAnusa nURRanthAdhi – 42], ‘engaL irAmAnusan [rAmAnusa nURRanthAdhi – 32]’, etc., there is a huge difference between our considering this enjoyability (for experience; nirhEthukam) and that purifying quality (for surrendering; could be sahEthukam), and for this matter that is so like this it would end up as a blemish; we had talked about it earlier by mistake, may be due to that emperumAnAr’s love has reduced on me – thinking in this way amudhanAr‘s mind felt hurt, and in this pAsuram – having the mind that is said as ‘bandhAaya vishaya sanghi’ (if there is interest in other matters, it would tie us further), and due to fully performed bad karmas I was being born in classes of birth and was roaming here; earlier I told in many pAsurams about the purifying quality of yours as ‘Oh emperumAnAr who graced me by accepting me and removed those sadness that are the series of births’ – my doing this would be a blemish is what those who melt thinking about you would feel, is what the intellects would always say – amudhanAr is saying so by looking at emperumAnAr.

pUNdu – tied
valliyil – by affection
vinai – due to karmas
mayakkum – which create destruction of knowledge
iru – (such karmas) of two categories in the form of good and bad deeds,
due to which
madhi mayangi – knowledge gets muddled
thuyakkum – and creates confusion in mind,
piRaviyil – in such a birth, I
thOnRiya – came and born;
agaRRi – (emperumAnAr) removed
thuyar – the sorrows that are the result of karmas
uya – and saved
koNdu – by accepting
ennai – me;
nalgum irAmAnusA – Oh (emperumAnAr) who showed such love towards me,
idhu – this my talking about your quality of purifying (which was done in a few earlier pAsurams) (instead of considering mainly the enjoyability of emperumAnAr), would be considered as
izhukku – a blemish
nayakkumavarkku – by those having the liking for you
unni – and who think about
unnai – you
naindhu – and become weak (due to love)
enRum – at all times,
is what
nallavar – the righteous ones
enbar – would say about this.

nallavar – also about – those loving you.

If recited as ‘iru vinay valliyaip pUNdu’ – the rope that is karma of two types is voluntarily tied (by me),  and am like having a (metal) pot stuck in the head up to the neck, which cannot be removed, and thus I got into it myself;  (and instead of seeking help from someone (AchAryan), as I tried to remove it, it became even tighter).

Starting from ‘mayakkum iru vinai’ through ‘uyak koNdu nalgum irAmAnusA’ is – for those having nature of liking you thinking about you, it (my doing this) would be a blemish/lowly, is what the righteous ones would say;  in this, it can also be said that due to inability to bear the experience, they would be weak at all times.

mayakkum iru vinai valliyil pUNdu – being opposed to true knowledge about thathva (existence), hitha (means), and purushArththam (goal), and creates interest in lowly matters, like a golden handcuff and an iron handcuff, being tied by the rope that is karma of two types that are good and bad deeds;  like having a (metal) pot stuck in the head up to the neck, this karma is enclosing this AthmA; mayakku – make mind get besotted;

When reciting as ‘iru vinay valliyaip pUNdu’, by own effort tying with rope that is of two types of karmas;

madhi mayakkith thuyakkum piRaviyil thOnRiya ennai – As said in ‘agyAnEnAvrutham gyAnam thEnamuhyanthi janthava: [SrI bhagavath gIthA]’, that is, due to that, all of mind becomes besot, and creates confusion and doubt – such is the series of birth in different forms, and was involved in such cycle, with the whole world as the witness; thuyakku – confusion of mind. that is, doubt. mayangu – get besotted/agitated;

thuyar agaRRi uyyak koNdu nalgum – As said in ‘garba janmAdhyavasthAsu dhu:kkam athyantha dhussaham’ (from womb, as infant, etc., there is corresponding sadness/difficulty), the sadness that is of being in the womb and being born, which are sadness that sends shivers just to hear it – was removed without trace, and also making me understand step-by-step the difference between AthmA and non-AthmA (that is, removing the dhEhAthmAbhimAnam), and to be able  to discern what is to be taken up and what is to be dropped, and to be able to discern association between own and others (emperumAn, or, other jIvAthmas), took me up so that I am saved, and considered me very specially dear;

My saying ‘irAmAnusA’ is as ‘oh emperumAr!’ considering you as of most purifying nature (instead of considering only your enjoyability); may saying this would–

by all three faculties (mind, speech, body), they have got full faith in you, and think about you, and having a strong liking towards you – for them;   nayakkum – liking;

idhu izhukku – Like saying ‘nAl thOL amudhE [thiruvAimozhi – 6.9.10]’, ‘ArAvamudhE [thiruvAimozhi – 5.8.1]’, while I had to be like ‘irAmAnusan enakku AramudhE [rAmAnusa nURRanthAdhi – 19]’,  ‘adiyERku inRu thiththikkum [rAmAnusa nURRanthAdhi – 25]’ . thus enjoying till the time AthmA exists, the infinite wonderful nectar, and be loving of you, I did not do that – instead, I told only about your ability to remove from worldly realm – this is a blemish (is what they would say); 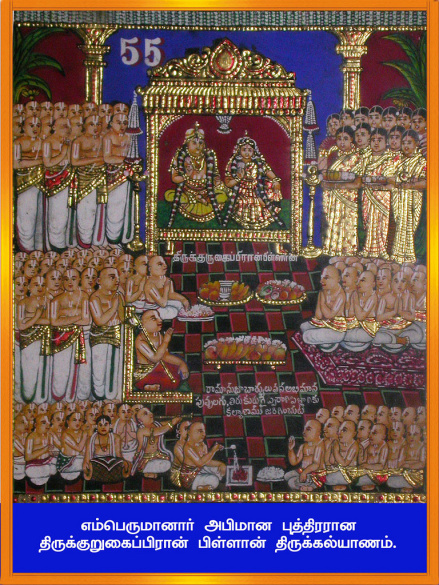 it can be read as ‘unnai unni naindhu enRum nayakkumavarkku idhu izhukku enbar nallavar’.  Then – for those who at all times think about you and become melted and weak my act would be felt as a disgrace, is what the righteous ones would say.

nallavar – those who are associated to you.

for those who think of you as all types of relationships;

Like how someone tries to arrange something good for himself (without leaving it to AchAryan), one is tying himself in the rope that is karma, and not able to remove it himself.

uyakkoNdu nalgum – voluntarily took me up – only reason is his love.

enRum naindhu – since the enjoyability is there every moment, they are always in that state (and are not having time to think about his qualities of purifying).