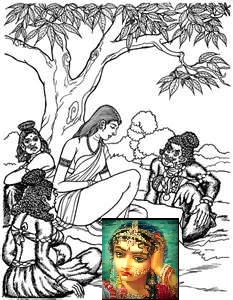 AzhwAr, even after being greatly anguished due to separation from emperumAn and calling out to him, he did not arrive; AzhwAr then decides himself that emperumAn does not like him and mercifully explains through the words of another person [as a nAyaki, consort, of emperumAn] “there is no benefit of my AthmA and its belongings which are disregarded by him; let these be destroyed”.

In eighth decad – Since emperumAn did not turn towards AzhwAr, when AzhwAr called out for emperumAn, AzhwAr thinks emperumAn is not interested in him, highlights the following aspects:

In the previous decad, AzhwAr called out to emperumAn, which made everyone melt; deciding that “even after calling out like this, sarvESvara did not turn towards me due to having disregard for me”, he decides to give up [his own self and belongings] thinking “if the lord who is naturally apt for me, is with good qualities and is able to destroy the enemies himself does not want these [self and belongings], do I need them?”, and says “I don’t want my self and my belongings which are disregarded by him” and highlights his detachment towards them through the words of another person [as a consort of the lord]. This AthmA is desired only because it is desirable for him; when he does not regard this AthmA as desirable, having attachment to that AthmA is as good as previous state [before enlightenment] of considering the soul to be the same as body [and pampering it];

na dhEham – One is so attached to his/her body that it will make one give up the eternal but invisible benefit also just for bodily enjoyment; I don’t want such body. na prANAn – the body is desired to sustain one’s prANa (life); I don’t want such prANa. na cha sukham – One desires one’s life for it’s joy; I don’t need that joy. I don’t want anything else which supports these. And, all of these are part of the goal for AthmA; I don’t want that AthmA too. Why are you addressing these aspects individually? [ALavandhAr says] There are many aspects which are outside the kingdom of service at your divine feet.I do not want any of these. nAtha – Is there any reason to be desiring for those which are beyond the desire of the owner? [emperumAn says] Alright. In that case, let me eliminate those over time for you. [ALavandhAr says] I cannot even tolerate these for even a single moment. You cannot just keep them away, you have to fully destroy them. [emperumAn asks] Is this your truthful desire? [ALavandhAr says] thath sathyam – Truth. madhu mathana – If I am not telling the truth, let me suffer the fate of those deceptive persons in front of your highness. SrI rAmAyaNam sundhara kANdam 26.5 “nahimEjIvithEnArthO naivArthair na cha bhUshaNai: | vasanthyA rAkshasImadhyE vinA rAmam mahAratham” (For me who is separated from SrI rAma, the mahAratha (the great charioteer) and living amidst the demoniac ladies, there is no use of my life; no use of any objects; no use of any ornaments) – sIthA pirAtti says “my existence is amidst the demoniac ladies, and I am separated from perumAL (SrI rAma), what is the use of any of these?”.