When asked “In this age of kali which invades by confusing the mind and faith of sentient, how can you maintain your firm faith?”, amudhanAr replies “that invasion happens only for those who are not involved in the knowledge spread by emperumAnAr“.

Your highness talked about your love towards the devotees, as ‘avar emmai ninRu ALum periyavarE’ (in the previous pAsuram), but  – In this day and age of kali that invades by confusing the mind of knowledge, faith, and love, of sentient, is it possible for you to have this faith staying together strong? – few who were present nearby asked so; amudhanAr replies – since emperumAnAr is complete in his qualities of greatness, kindness, etc., if those with limited or absent knowledge attempt to praise him, he would accommodate to possess the nature, form, qualities and places as per the qualification of such people; this time and age of kali would only invade into those who do not possess the intellect spread by such emperumAnAr, and it would not affect me who got such intellect from emperumAnAr; so for me there is no problem of continuation of this faith till time eternal that this AthmA would be present.

periyavar – Those having intellect and ability to speak; such enriched people –
pEsilum – if they speak, or,
pEdhaiyar – those having the limit or lack of knowledge and ability, such poor people –
pEsilum – if they speak also,
it is not possible to see the limit based on their knowledge and ability (for the first kind of people), and (for second kind of people) they would not have to think that attempting this is not possible for us because of lack of knowledge, and so not have to back out;
tham guNagatkuriya – in this way they can speak based on their (respective) qualities,
sol – words according to his nature, form, quality, and place
enRum – at all times,
udaiyavan enRenRu – that he possess such (quality of being described in such words);
uNarvil mikkOr – people having knowledge
theriyum – think through many times and involve in it
vaN keerththi – having such divine glory
irAmAnusan – is emperumAnAr, who
thErndhu – investigated
maRai – vEdham
ulagil – in the world, and
puriyum – helped by giving
nal gyAnam – distinguished knowledge;
porundhAdhavarai – for those not joining / taking up  that (advice)
kali porum – kali would gain upper hand and oppress them.

It would not do so to those who have joined, is the thought.

When recited as ‘guNangatku uriya sol onRum udaiyavan’ – (onRum – > how two different levels fit together due to his greatness and kindness); their words are based on their level of knowledge and ability, or lack of knowledge and ability;   It cannot be said that the words of praise (of learned ones) are excessive, or (words of  the illiterate) would not fit enough, and so cannot say that these are a match of unmatchable – this is due to his unbreakable greatness on the one side, and unbounded kindness on the other side (respectively); so those words would fit him – he is such a lord – is the thought here.

Some recite it also as ‘than guNangaktu’, – (where ‘than’ applies to emperumAnAr) – whether the intellects speak, or the illiterates speak, he always possesses quality that match those words which can be talked about by them;

periyavar pEsilum – If those who are full of intellect that is up to par for praising, would praise him,

pEdhaiyar pEsilum – or if those who do not have the knowledge or ability to allow for praising, would praise him;

since he is having great glory of winning all the philosophies in debate with a thousand faces, how much ever may be the knowledge and ability of others, they would not be able to praise according to his level; if so, it does not need a mention about those with lack of knowledge and ability.

But, if they attempt by their wish based on their force of devotion, he sets himself up to that level to match that praise, which is out of the wealth of his excellence of accessibility to them;

It cannot be said that the words of praise (of learned ones) are excessive, or (words of  the illiterate) would not fit enough, and so cannot say that these are a match of unmatchable etc. – this is due to his unbreakable greatness on the one side, and unbounded kindness on the other side (respectively); so those words would fit him – he is such a lord – is the thought here. What they praised is fact, and not unlike what is there, and thus it establishes the goodness of what they said;  uriya – apt (words); udaiyavar – lord;

Some recite it also as ‘than guNangaktu’, – whether the intellects speak, or the illiterates speak, he always possesses words that match his quality which can be talked about by them;

uNarvil mikkOr – if one were to talk about knowledge and ability, some noble ones are quoted as – ‘it is these people who are fully knowledgeable, it is these who have studied everything’ – having such non-blemished knowledge (they are the AzhvArs); 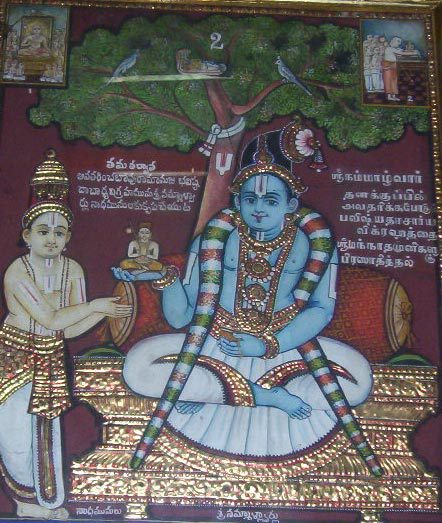 maRai thErndhu ulagil – As said in ‘gambheerAnAmgruthakagirAm’, since it is deep and hidden for those who try to understand its inner meanings, vEdham has got the name ‘maRai’ (hides); divining vEdhArtha sangraham, gIthA bhAshyam, etc., without making any contradictions of meanings to such vEdham using next levels of vedic text (upabrahmaNams) as said in ‘ithihAsa purANAbhyAm vEdhamsamupa brahmayEth’; thErndhu – researching/investigating;

ulagil puriyum nal gyAnam – in this world of illiteracy, he explained them (vEdhas) and helped everyone from AsEthu-himAchalam – he having such distinguished intellect;  puriyum – giving;

porundhAdhavarai – even if he helps everyone in these ways, due to dullness of faith like uyyakkoNdAr (one who lived during the time of emperumAnAr; he understood the words but not the practicing what emperumAnAr explained about surrendering to emperumAn), and due to misfortune of such birth of this time, such people who do not take it up; that is, those who did not come into the circle of his advises; porundhu – join;

porum kaliyE – the ill-effect of kali yugam would come and invade them; kali would gain upper hand and start oppressing them; so who ever due to the acceptance of emperumAnAr got the distinguished knowledge would not be affected by kali;

and ‘parihara madhusUdhana prapannAn prabhuraham anya nruNAm na vaishNavANAm’ (~do not go near the place of emperumAn’s devotees; I am not the lord for them; they are my lord) and, ‘thyaja bata dhUra tharENa thAn apApAn’ (leave those devotees; they are not of any sins), so said yaman too to his servants (prostrate before emperumAn‘s devotees and stay away from them), as said in ‘namanum than thUdhuvaraik kUvich chevikku [nAnmugan thiruvanthAdhi – 68]’ (yaman said into to the ears of his servants).

pEsilum – Since it is about AchAryan, talking is meant as – praising him;

Their limits of praising is like going as deep in to the sea as much as they can, or, dipping their body in the sea shore based on their inability;

enRu enRu – those of non-blemished knowledge keep thinking about emperumAnAr again and again, so this is said twice.

My steadfastness that whoever keeps in his mind about emperumAnAr would be my lords (as said in earlier pAsuram), would not be affected by kali because emperumAnAr has made himself available due to his kindness and has included me in that group.