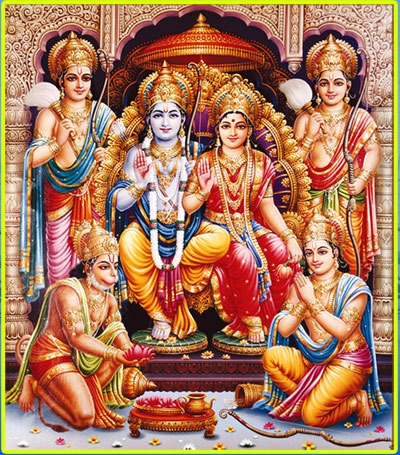 In fifth pAsuram, parAnkuSa nAyaki says “There is no use of my knowledge which is not desired by my greatly beloved SrI rAma, the son of dhaSaratha”.

Subsequently, parAnkuSa nAyaki says “What is the use of my knowledge when it is not desired by chakravarthi thirumagan (the son of emperor dhaSaratha) SrI rAma, who killed rAvaNa et al who committed needless offenses towards sIthA, the divine daughter of king janaka”.

(ascending the throne after returning to ayOdhyA)
kaLi malar – having honey, well blossomed
thuzhAy alangal – by the thiruththuzhAy (thuLasi) garland
kamazh – best fragrance
mudiyan – wearing the crown
kadal gyAlaththu – the earth which is surrounded by ocean
aLi mikkAn – mercifully lived manifesting his cool mercy
kavarAdha – not liked
aRivinAl – knowledge
kuRaivilam – we have no use.

SrI rAma burnt down the unjust tumultuous rAvana’s wealthy city for the sake of sIthAp pirAtti who is complete with the attractive tender sprout like complexion, who remained alone in a confined manner, was famous [for her mercy to being imprisoned to protect others] and who has a sweet voice like that of a parrot. Such emperumAn, after ascending the throne in ayOdhyA, who was wearing the crown which is given best fragrance by the well blossomed thuLasi garland on it which is having honey, mercifully lived manifesting his cool mercy in the earth which is surrounded by ocean. We have no use of our knowledge which is not liked by such emperumAn.