In second pAsuram, parAnkuSa nAyaki‘s friend says “This disease cannot be cured by pacifying kshudhra dhEvathAs (lowly deities); if you explain emperumAn‘s greatness without getting bewildered, we can redeem her”.

Subsequently, parAnkuSa nAyaki‘s friend says “Her disease is not caused by kshudhra dhEvathAs but by the greatest dhEvathA (emperumAn); hence, if you tell her about his distinguished symbols, she can be redeemed”.

thisaikkinRadhu – (both she and you) are losing your mind;
ivaL nOy – caused by her disease
idhu – this situation
mikka perum dheyvam – caused by sarvESvara who is greater than all, with incomprehensible greatness;
idhu – this [activity]
isaippu inRi – not fitting (to the nature of yours, hers and the disease)
nIr – you all
aNangAdum – being engaged for the
iLam dhEvathA – petty dhEvathA (deity)
anRu – is not [caused by];
thisaippu inRiyE – without getting confused (by the words of the others who advice you otherwise)
sangu chakkaram – Sanka and chakra (which are distinguished symbols of that supreme lord)
enRu – as
ivaL – she (parAnkuSa nAyaki, who is bewildered)
kEtka – to hear
nIr – you all
isaikkiRRir Agil – if you can say
nanRE – well
il pErum – be sustained
ithu – this state
kANmin – (imagine and) see

Both she and you are losing your mind; this situation caused by her disease is caused by sarvESvara who is greater than all, with incomprehensible greatness; this [activity] you all are engaged for the petty dhEvathA (deity) is not fitting (to the nature of yours, hers and the disease); without getting confused, if you all can say Sanka and chakra and make her hear, she can be well sustained; (imagine and) see this state [of her being redeemed].

The mother and relatives say “Alright. We are confused about her disease. If you know the cause for this, why don’t you tell us?”,

They all ask “In what aspect, we lost our mind in determining the cause of the disease? In what way can we not lose our mind in the remedy?”,

What is the goodness in it? 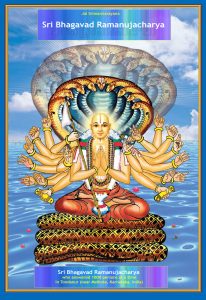