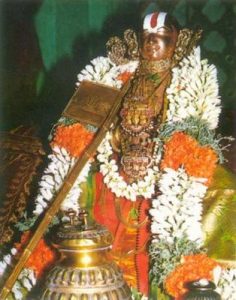 In tenth decad, AzhwAr becomes delighted thinking about having the faculty which is fully engaged in bhagavAn and thus being grateful saying “Is there anything else I need other than spending my time meditating upon emperumAn’s divine incarnations, divine qualities and many divine activities for the purpose of protecting the world, unlike the samsAris (mundane people) who are to be rejected?”,

In tenth decad – AzhwAr previously explaining the defects of praising others and greatness of praising bhagavAn, being greatly delighted thinking “we are fortunate to enjoy such matters about bhagavAn in all manner” and highlights the following aspects:

Meditating upon these aspects, AzhwAr says “for me who enjoyed such sarvESvaran in all manner, I have no grief whatsoever” and being greatly pleased, concludes by explaining the essence of this decad which is “true nature of AthmA is to have exclusive engagement in bhagavAn”.

In the previous decad, AzhwAr tried to rescue those who praise others and engage them in bhagavath vishayam (matters relating to bhagavAn) and as they refused to be rescued, he said “Unlike becoming like them, I first became disqualified to praise others”; in this decad, he says “not only I became disqualified to praise others, I have also become qualified to praise bhagavAn”; in thiruvAimozhi 3.8 “mudiyAnE“, AzhwAr prayed to experience bhagavAn and since it did not fructify, he along with his sensory organs cried out with great grief; meditating upon his longing towards bhagavAn which is similar to the pathetic state of samsAris longing towards worldly pleasures, AzhwAr thinks that his loss in “mudiyAnE” (of not being able to enjoy emperumAn) is in itself a great gain [in comparison running behind worldly pleasures]; further AzhwAr says – I enjoyed a) emperumAn’s incarnations for his devotees, amidst the samsAris with a form similar to theirs, like being bound by karma, b) his divine activities which are part of his incarnations, c) his divine beauty, d) his togetherness with the divine ornaments, e) his togetherness with the divine weapons, f) his agatithagatanA sAmarthyam (ability to accomplish impossible tasks); hence I have no worries.