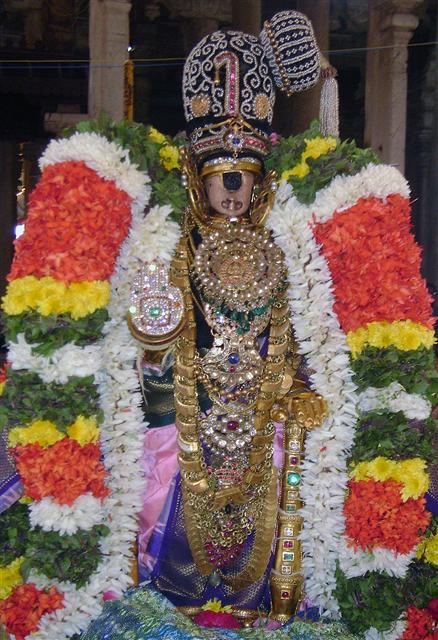 periya perumAL divines to AzhwAr “even if you did not have karma, gyAna, bhakthi yOgams which are prescribed for brAhmaNa, kshathriya and vaiSya men, you could still carry out worshipping and praising of me, as prescribed for all chEthanas”. AzhwAr responds “I did not have these also”.

pOdhu ellAm – at all times
pOdhu koNdu – with flowers
un ponnadi – at your beautiful divine feet
punaiya mAttEn – am without strength to offer
thIdhu ilA – without faults
mozhigaL koNdu – with words
un thirukkuNam – your auspicious qualities
seppa mAttEn – am unable to recite
kadhAlAl anbu – the affection which comes out of love
nenjam – in my heart
kalandhilEn – have not made
adhu thannAlE – due to that
arangaRku – you, SrI ranganAthan
EdhilEn – did not enjoy through any part of the body
ellE – Oh!
en seyvAn – for what
thOnRinEnE – was I born?

pOdhellAm pOdhu koNdu un ponnadi punaiya mAttEn – It is proper to decorate your gold-like divine feet, with beautiful, fresh flowers, at all times. It is not that I was not eager in doing that. I did not have even the strength for doing that, says AzhwAr. While engaging in matters other than you, I had both the eagerness and the strength, but not in matters relating to you, is the opinion expressed here. vishNu dharmam 1.13 says “yau thath pUja karau karau” (only those are hands which worship hari). With the hands which were meant to worship you, I was worshipping inappropriate things which would cause harm to me both in this samsAram and in SrivaikuNtam. Among the two instances of usage of the word pOdhu, the first one refers to time and the second, to flower. pOdhellAm punaiya mAttEn – the opinion here is not that he is not able to worship all the time and could worship only at some of the times. He is not able to worship at any time at all, is the meaning here. vishNu dharmam, haryashtakam 70.84 says “sakruthuchcharitham yEna haririthyaksharadhvayam I badhdha: parikarasthEna mOkshAya gamanam prathi II” (through whomsoever the two syllable word hari has been pronounced, all the deeds which are to be done for going to mOksham have been done by him). Again, “sakruth smruthO’pi  gOvindhO nruNAm janma Sathai: krutham I pAparASim dhahathyASu thUlarASimivAnala: II” (gOvindhan, even if thought of once, will remove the swarm of sins committed in hundreds of births, just as fire destroys a huge heap of cotton). SrI rAma says in SrI rAmAyaNam yudhdha kANdam 18.33 “sakrudhEva prapannAya thavAsmIthi  cha yAchathE I abhayam sarvabhUthEbhyO dhadhAmyEthath vratham mama  II“ (I offer protection from all other creations to one who surrenders to me and one who prays to me after saying that he is my servitor. This is my oath). Thus in all the above-mentioned quotes, emperumAn’s greatness is such that if a person were connected to him even once in his lifetime, emperumAn ensures that the person attains the path [to reach him]. AzhwAr laments that he was unable to worship him even once. emperumAn tells him “even if you have not been able to worship me with your body, but indulged instead in worldly matters, you could have praised me with your faculty of speech, at least”. . . . .

thIdhilA mozhigaL koNdu un thirukkuNam seppa mAttEn – even if my words are faultless and beautiful, I am not able to talk about your auspicious qualities. vishNu dharmam 1.13 says “sA jihvA yA harIm sthauthi …” (that is tongue which praises hari); unlike this, my tongue, which was meant to praise you,  does not roll when it comes to talking about you. However, when it comes to talking about lowly matters with lowly qualities, it is able to talk like an implement “vAchchi” which cuts across a palm leaf. emperumAn then says “even if your body and tongue are involved in worldly matters, at least with your heart [mind], you could show affection towards me” . . . .

kAdhalAl nenjam anbu kalandhilEn – in one particular matter, my heart has not exhibited affection borne out of love. As bhagavath gIthA 2.62 says “sangAth sanjAyathE kAma: kAmAth krOdhO’pi jAyathE” (desire results out of involvement in worldly matters. Anger results out of desire), if desire results out of involvement with worldly pursuits, it is possible to divert it towards your matter. Earlier, when I had shown affection towards women, it was with the ulterior motive of stealing their possessions. I did not have affection to truly love them. It is apt to think of the following authentic sources as proof of the above: 1) ALavandhAr says in sthOthra rathnam 62 “smaraparavaSO vanchanapara: “ (I am lecherous and cheat the women who  respond to my lust); 2) vishNu purANam 3.7.30 says “paramasuhrudhi bAndhavE kaLathrE sutha thanayA pithrumAthru bhruthruthyavarkkE  I SadamathrupyAthi yO’rththathrushNAm thamadhamachEshtamavEhi nAsya bhaktham  II“ (the person with depraved intelligence who runs after the possessions of close friend, relative, wife, children, parents, servants –know that such a mean person is not a devotee of emperumAn).

adhu thannAlE EdhilEn – while I should be involved with at least one among the three channels of manam, vAkku, mey (mind, speech and body) to attain the benefit that great people attain by geting involved with, I do not have even that. Hence I have nothing. arangarku EdhilEn – as said in bhagavath gIthA 5.29 “suhrutham sarvabhUthAnAm” (exhibiting good thoughts towards all beings) and as said in sthOthra rathnam 18 “vaSi vadhAnyO guNavAn ruju: Suchi: mrudhur dhayALur madhura: sthiras sama: I kruthi kruthagyas thvamaSi svabhAvathas samastha kalyANaguNAmruthOdhadhi II “ (one who is under the charge of his followers; gifting himself to his followers; being harmonious[with his mind, speech and action]; having purity [to shower on followers without any reason]; unable to bear separation from followers; unable to tolerate (their) sorrow; being sweet; being steadfast (in his followers’ goals); being equal (to all those who take refuge under him); carrying out followers’ deeds as his own; magnifying even the smallest good deed of his followers; you are by nature, the repository, as an ocean of nectar, of all auspicious qualities), you have the honesty of being in harmony through your mind, speech and action in matters concerning your followers. I am without anything towards such an entity as you, who has come to SrIrangam so that people can see you for themselves instead of merely hearing about you through SAsthras.

en seyvAn thOnRinEnE – vishNu thathvam says “vichithrA dhEha sampaththi” (this wondrous body has been gifted to worship emperumAn) – instead of putting to use the limbs that emperumAn gifted in worshipping him, I had wasted them; why was I born? My birth, instead of benefitting anyone, has become the cause for many bad deeds for others as well as for myself, says the AzhwAr.

Let us now move on to the 27th pAsuram.