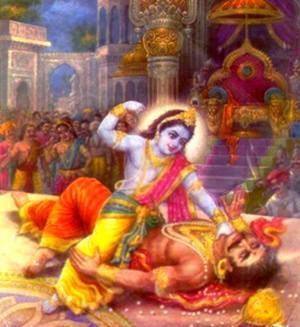 In fifth pAsuram – AzhwAr says “Those who remain indifferent after listening to emperumAn‘s quality of incarnating, with his most distinguished divine form for the purpose of eliminating the enemies of his devotees, are not even considered worthy of existing”.

Subsequently, AzhwAr says “Those who  are not attracted towards incarnations of emperumAn, for the purpose of eliminating the enemies of his devotees, what japa (chanting) etc would they do?”.

The primary lord whose distinguished incarnations are revealed in vEdham [as said in purusha sUktham “ajAyamAna: … ” (the unborn, assumes many births) etc] was born with his primordial spirital form which is having divine splendour as in paramapadham, to control kamsa who was hurting good-natured people such as dhEvaki, vasudhEva et al. Those who do not sing (such glories) such emperumAn and dance in all streets, what is the use, even if they chant like a human being in front of wise scholars who have studied vEdham? Implies that they are neither qualified to be called human beings nor their japam (chanting) is worthy.

For this, Sruthi (vEdham) declaring “ajAyamAnO:” is the authentic proof. AzhwAr is explaining this further.

Are you condemning such people who are not dancing and ignorant?, AzhwAr says

In the previous decad, AzhwAr enjoyed this material realm considering it to be a property of bhagavAn. In this decad, as said in periya thirumozhi 11.6.7 “eNNAdha mAnidaththai eNNAdha pOdhellAm iniyavARE” (when I don’t think about those who don’t think about bhagavAn, it is very pleasant) and periya thirumozhi 7.4.4 “pErALan pErOdhum periyOrai oru kAlum pirigilEnE” (I will never separate from those great souls who constantly recite the names of supreme lord), AzhwAr accepted some and rejected others. Why is this contradiction? Previously, though he realized his position of being in this material realm, he was overwhelmed with considering everything as owned by bhagavAn and expressed his emotions liked that. AzhwAr has different states [at different times]. [pUrvAchAryas] would explain that AzhwAr can be said to have the state of muktha (liberated soul) by seeing the previous decad; He can be said to have the state of mumukshu (desirous to be liberated) by seeing this decad.