amudhanAr is anxious whether he would get the fortune of joining with those who know as is about the auspicious qualities of emperumAnAr.

In the previous pAsuram it was about the wellness of – his speech not talking about anything other than the auspicious qualities of emperumAnAr; and as it did not stop with that, but as the devotion was overflowing, and so in this pAsuram, he longs to be able to join the group of those knowledgeable devotees who know as is the auspicious qualities of emperumAnAr who has kept in the place that is his devotion, the beautiful thamizh vEdham that is thiruvAimozhi which is having divine words of nammAzhvAr who is the ruler of the beautiful looking thirukkurugUr (AzhvAr thirunagari) and who through thiruvAimozhi helped everyone about the truth, path, and destiny.

then – Beautiful to the eyes
kurugaip pirAn – that is (AzhvAr) thirunagari; its lord, that is nammAzhvAr; his
pAttu ennum – prabandham, which is famously known that way,
vEdham – in the form of vEdham
pasum thamizh thannai – that is thiruvAimozhi, which is in the form of beautiful thamizh;
irAmAnusan – emperumAnAr
than paththi ennum – whose devotion
veettin kaN vaiththa – is the living place where he kept (such thiruvAimozhi), his
uNarndhOr – who have known the
pugazh – auspicious qualities (of such emperumAnAr)
mey – in its true form,
eettangaL thannai – such groups of them,
en nAttangaL kaNdu –  my eyes to see them
eydhida – and attain
inbam – joy
kUttum – (his grace) which can help join me with them
vidhi enRu kUdum kolO – when by his grace it would come together?
– – –
vidhi – sukruth – his giving the grace/opportunity.

His (amudhanAr’s) thinking of reason for opportunity is, that (special) one’s (emperumAnAr’s) grace.

When at that current time itself it was possible to see the group of those who know about emperumAnAr’s auspicious qualities, why is he saying like this?  He is not wishing for just seeing. When seeing, instead of not having any changes, he wishes to become loving of them.

inbam -> prEmam -> love. That could happen by emperumAnAr’s grace only.

then kurugaippirAn – then – beautiful looking, (or) being in the south side.   kurugai – place that takes to paramapadham / having equal greatness as that of paramapadham;  pirAn – incarnated in such (AzhvAr) thirunagari, and for the people of this world to reach the true goal, he had advised about the truth, ways, and goals through dhivya prabandham – such nammAzhvAr’s.

Or, by incarnating in that place, he is being sought by the people, so he being of great help.

than paththi ennum  – if he (emperumAnAr) does not think about such thiruvAimozhi even for a second it would feel like eons – he having such a parama bhakthi towards thiruvAimozhi.

than paththi –  His devotion – unlike others’ devotion, the devotion of emperumAnAr who knows as is about emperumAn’s nature, form, qualities and wealth – that devotion would rise to the level of his complete knowledge/wisdom;  such devotion’s  –

veettin kaN vaiththa  – kaN -> in;  veedu -> place used for keeping safely;  like keeping gems inside a copper container, emperumAnAr keeps thiruvAimozhi in the big house that is his devotion;

iramAnusan pugazh – (such emperumAnAr’s auspicious qualities) – by always discoursing about thiruvAimozhi, advising on that to the confidential ones about its full meanings, and based on its pAsurams creating meanings for SArIraka sUthras, and getting piLLAn to write meanings for thiruvAimozhi – auspicious qualities of emperumAnAr having such greatness ;

mey uNarndhOr – the noble ones who have understood as is about such auspicious qualities of emperumAnAr; 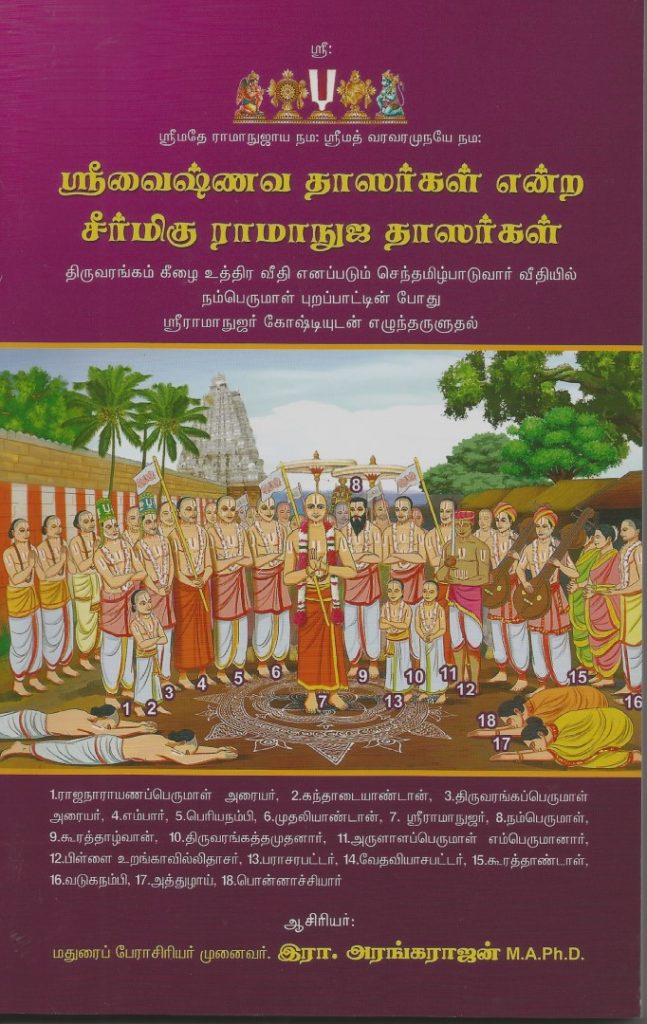 Those who truly know the auspicious qualities of emperumAnAr

en nAttangaL – until my surrendering to emperumAnAr my eyes were trying to be happy by looking at the three ills – interest towards wealth, women, and land/properties; nAttam -> seeing.

inbam eydhidavE – leaving the happiness and sadness cycles brought by my involvement with the relatives of this body, now, gained joy by looking at these groups of knowledgeable devotees;

kUttum vidhi enRu kUdum kolO – when would there be an opportunity to join them; vidhi – sukruth – emperumAnAr’s giving of the grace/opportunity.

His (amudhanAr’s) thinking of reason for opportunity is that one’s (emperumAnAr’s) grace.

When at that current time itself it was possible to see the group of those who truly know about emperumAnAr’s auspicious qualities, why is he saying like this?  He is not wishing for just seeing. When seeing, instead of not having any changes, he wishes to become loving of them. Love, that love would only manifest by the grace of emperumAnAr, so that is why he is saying this.

Or, mey uNarndhOr -> their knowledge is without any blemish. Whereas that is possible only in that esteemed place (SrIvaikuNtam), here these devotees possess such ability, and so here itself, when would it be possible to see them and have love towards them and have a complete experience of it by the grace of emperumAnAr? That group of nobles ones are always available for him (amudhanAr), but that would be a new nectar of an experience every moment (and so creates such a wish of grace of emperumAnAr).

enRu kUdum kolO – If he knows when he would be able to see and love the devotees of emperumAnAr, then he might be able to look forward to that day, like how bharathAzhvAn was told ‘we would come back in fourteen years’.

than paththi ennum veettin kaN vaiththa – his devotion towards thiruvAimozhi is the safer house for thiruvAimozhi. That is, it is always recited/delved into by him.

Something special about this house: It cannot be broken into by others;  others: those who insult the reference that is vEdham, and those who insult who is said by the vEdhams, that is emperumAn. Their not breaking into it, is – that thiruvAimozhi not reaching their ears.  If thieves came in, they would unset things; emperumAnAr nurtured thiruvAimozhi with devotion, and such that others cannot disturb it, and lectured its meanings to his disciples, and created vyAkyAam through piLLAn, and thus gave it to the sampradhAyam without getting it touched by those others.

dhEvaki gave birth to kaNNan; she did not get to see any of His playful acts; yASodhai got that opportunity;  In the same way, SatakOpan is the mother of thiruvAimozhi, but he did not get to see it growing; it was emperumAnAr who was the mother who nurtured it and saw it grow. Like how kaNNan played above the ability of humans, thiruvAimozhi too gave the meanings of vEdhas in a better way in beautiful thamizh, and it gave the true meanings of vEdha vyAsar’s brahma sUthram, showed in front the god that cannot be seen, and showing the tastes of even above vEdhas – the acts that emperumAnAr saw like yaSOdhai, so like yaSOdhai he got the fame as well.