First pAsuram – AzhwAr cries out with grief saying “You gave me the body which is to be used to surrender unto you; but I have instead gone in its (bodily) ways and gone astray; when will I see you?”.

First pAsuram. AzhwAr says “You have created this universe and bestowed me body and senses to worship you; I am using those for worldly pleasures and gone astray; you have to tell me, who is in this situation , as to when I will reach you”.

munnIr – having 3 types of water
gyAlam – universe
padaiththa em mugil vaNNanE – created and because of such magnanimous act similar to that of dark clouds (that shower the rain irrespective of land or water), you became my saviour!
annAL – during the time of such srushti (creation)

having merciful heart,
nI – you
thandha – gave (to reach you)
Akkaiyin – body’s
vazhi – going in its ways (that adds bondage)
uzhalvEn – me who is suffering (in garbha (womb), naraka (hell) etc)
vem – that which leads to a pitiable state (after having acquired knowledge)
nAL – in such day
nOy – diseases (in the form of ahankAram (considering oneself to be body), artha (worldly wealth), kAma (worldly pleasure) etc)
vIya – to destroy
vinaigaLai – karmas (which cause them)
vEr – with its traces
aRappAyndhu – plucked and thrown away
yAn – I (who used the senses which were supposed to be favourable towards you, against you)
unnai – you (who is the primary saviour)
ini – after being ungrateful
vandhu – come (giving up this situation)
kUduvan – unite
en nAL – when is that?

Oh emperumAn who created the universe that has 3 types of water and because of such magnanimous act similar to that of dark clouds (that shower the rain irrespective of land or water), you became my saviour! During the time of such srushti (creation), having merciful heart, you gave me (to reach you) a body; but in such day when I have become pitiable having gone in such body’s ways (that adds bondage) and am suffering (in garbha (womb), naraka (hell) etc), for such me, plucking and throwing out my karmas with its traces, to destroy the diseases (in the form of ahankAram (considering oneself to be body), artha (worldly wealth), kAma (worldly pleasure) etc) which are caused by such karmas, after me being ungrateful, when will I (who used the senses that were supposed to be favourable towards you, against you) unite with you (who is the primary saviour)? 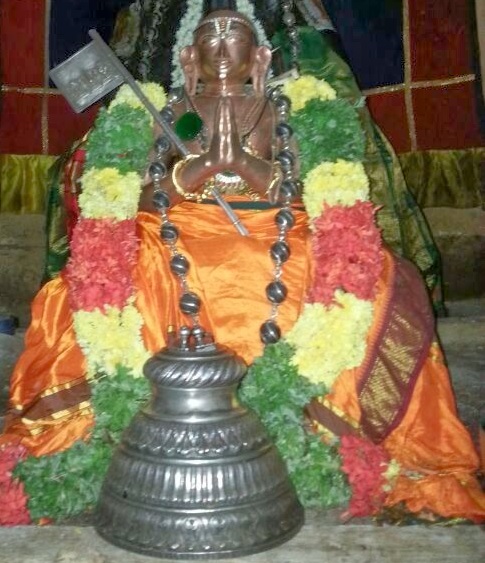 nAvuraikkum  –  my tongue, without any love / feelings
enbadhuvE – utter the phrase that is famously known as
emperumAnAr thiruvadigaLE SaraNam – “I surrender to the lotus feet of SrI rAmAnuja, who is my owner”
iththAl en? – what is the use of saying this (without any love and devotion, just for the sake of saying it)?
yAn onRum kANginRilEn – I am not able to figure out any
anbu –  devotion
avar pAl – towards him
ippOdhaLavum – till this very moment
eppOdhu undAvadhu ini? – if not for now, when will it blossom?

maNavALa mAmunigaL says that he has been uttering the sacred phrase “emperumAnAr thiruvadigaLE SaraNam” incessantly without any result. He says that he does not really realize the meaning of it and said it. He said it just for the sake of it and opines that there is absolutely no use saying in this fashion. Subsequently, he dives deep in his heart to explore if there is any pure devotion towards SrI rAmAnuja that may be hiding somewhere. To his utter dismay, he is not able to find any trace of it.

The phrase “emperumAnAr thiruvadigaLE SaraNam” is a soul uplifting phrase for piLLai kollikAval dhAsar. The same phrase is the sustaining force for eternal enjoyment for sOmAsiyANdAn. However, maNavALa mAmunigaL feels that he too tried to utter this very same phrase that meant more than their lives for these aforementioned people. But maNavALa mAmunigaL says that he uttered the phrase just for uttering it and did not do a deep dive into its purport. He repeatedly chanted this phrase without an iota of love and devotion towards SrI rAmAnuja. maNavALa mAmunigaL explores within his heart to find any traces of love towards SrI rAmAnuja as revealed by the phrase “sArndhadhen sindhaiyun thALiNaikkIzh anbuthAn migavum kUrndhadhu (irAmAnusa nURRandhAdhi 71). He is very disappointed that he could not find an iota of pure devotion and love towards SrI rAmAnuja even until this final days of his life. He asks himself, “if not for now, when will that love blossom, if at all there is a possibility of blossoming”. He concludes that there is absolutely no use in uttering the phrase without any love and devotion. At this juncture, we should take cognizance of the fact that maNavALa mAmunigaL used the phrase “irAmAnusAya nama” in pAsuram 2. In this pAsuram, he uses the phrase “emperumAnAr thiruvadigaLE SaraNam”. Similar to dhvaya mahAmanthram, there is a SrI rAmAnuja equivalent to it. While the phrase “emperumAnAr thiruvadigaLE SaraNam” constitutes the first half, the phrase “irAmAnusAya nama” is the latter half.